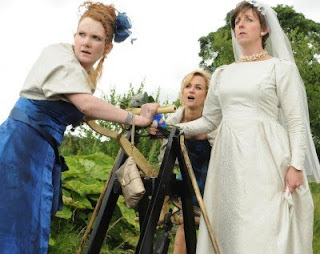 Here are the second part of the long list of 2010 awards, mostly based on the lighter side of the year's events and characters. Feel free to add your own winners and categories!

Funniest image:
Hayley on the push cart with Fiz and Becky pumping the thing to get her to the wedding
Deirdre ending up with cake-face after she was caught on video snogging Audrey's fella

Worst matched couple:
Carla and Trev. She never should have hired him for Underworld.
Nick and Natasha. He only used her because he couldn't have Leanne.

Well matched couple
Liz and Owen. He had a shade of Jim to him. Too bad Bev Callard disappeared just as Jim returned. Could have done a lot more with this.
Katy and Chesney. Cute as buttons, them two!
Izzy and Gary. They really work but will they survive Gary's post traumatic stress?

Most Relevant storylines:
Gary joining the army and suffering traumatic stress from his wartime experiences.
Sophie and Sian falling in love and demonstrating the hurdles to acceptance within their religion and within their community and families. And it wasn't all smooth sailing.
Peter's alcoholism. He drinks, he's sober, he falls off the wagon, he's sober again but sometimes still tempted.

My most embarassing moment award:
Deirdre being caught on CCTV kissing Lewis! OOPS!

Best return
Vera Duckworth from the Great Beyond

Worst return
Jim McDonald. All set for a rivalry between Jim and Owen, it fell flat due to Bev Callard/Liz McDonald's disappearance. 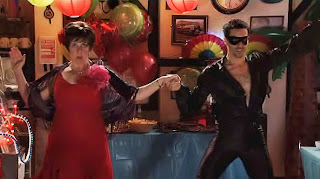 Best hen night: Hayley's.
Worst hen night: Leanne's
Worst stag night ever: Peter's in the Joinery which exploded and collapsed. (This just edges out the previous winner which was Liam's where Tony arranged to have Liam killed)

Best (Worst) wedding:
Roy and Hayley: About time they got married legally. The whole wedding with Mary the UberWeddingPlanner plaguing Hayley and then nearly ruining the day and the wedding with the train and all. Magic!
Peter and Leanne, with the groom gasping his lengthy vows with what was almost his last living breath.

Fashionista award
Julie just has to get the style award for the year!

Short term characters I enjoyed:
Charlotte Hoyle
Kylie Turner (i don't know if she's long term or not, she's not been around long yet)


I don't/won't miss you award:
Ryan Connor
Claire Peacock (well, except for the amazing performance in her last month)
Janice Battersby. They've pushed her to the back so much and she's pretty much just a fringe character now unless she's slagging off Sally in the factory.

I do/will miss you:
Eddie Windass. He's turned into a really brilliant character! I certainly changed my mind since i wrote this! Classic Corrie stuff!
Kelly Crabtree. Not a nice person but never boring.
Liz McDonald. I hope she goes off into the sunset with Jim!
Teresa Morton. She was never boring either!

Trooper award:
Betty Williams (and Driver) is 90 and still coming to work!

Clever casting award:
Although having yet another Barlow child (and grandchild) crawl out of the woodwork fell a bit flat due to it being so short term, it was pretty neat having William Roache's two sons play his on screen son and grandson. Short but sweet.
Posted by Tvor at 22:20

I'd go with most of that - you're so right about the pointless returns - Ciaran and Michelle - dull as dishwater - I'm really glad it looks like Maria's going to get more to do and be more like her "old self" - I like Maria. I also liked the Liz/Owen thing - really a shame that didn't develop. I'm going to miss Liz so much & loved her flirting with Ciaran! Corrie needs a decent cougar. Agree with your relevant storylines as well. Had forgotten about Jackie Dobbs appearance - as I remember, she was slightly easier to watch this time round as she'd toned down a notch or two!

I loved the scene where Deirdre was caked - her 'Ken, do SOMETHING!' line was just hilarious! Also agree about Sunita's return being pointless, Ciaran too but I still like him. Maria hasn't done that much this year, but I don't think her return was pointless, she's one of my favourite characters.

I expect they'll be doing more with Maria in the new year. I liked Sunita and i like Ciaran but they really have been spare parts for the most part.

I'll miss Liz so much - a classic character! She started off alright with Owen, but he turned into a creep and she went lukewarm on him without even knowing that. Weird. Really a shame about Big Jim and her never to be in any shape or form again.

I know some get bored with Peter's repeated falling off the wagon. It does happen to some alcoholics that they don't lose the desire to drink that easily. So it is realistic. I guess his pushing Leanne into the Joinery project was a form of denial.

Ditto Sophie & Sian. Some say they are boring, but Sophie has always been a low-key character, one with wisdom beyond her years. They're both very young and I think the lesbian storyline will develop in a similar way. I'm glad it's not explosive, showing that gay couples' love for each other is no different to straight couples.

Oh yea - the pump cart at Hayley's wedding and Deidre's cake in the face were hilarious and classic!