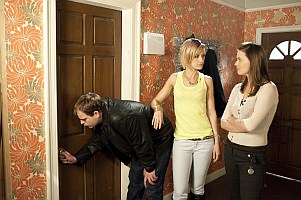 With Tracy Barlow's imminent arrival, and the obvious threat to Steve and Becky's marraige, you just know there's going to be more than one confrontation between the two women.

Think back to Tracy's ongoing feud with the last Mrs. McDonald, Karen. Karen was pretty gobby and tough but Tracy still got the best of her and was the last woman standing. Steve couldn't take Karen's off the wall choices when it came to fighting back and finally just had enough. Karen walked away and we've not seen her since.

Becky might be just as likely to go off on one as Karen did and Becky, though she's softened over the years, is not mellowed so much that she won't fight dirty if she has to. Tracy was mainly all about mind games and provoking and unfortunately, Becky tends to rise to provokation like an angry bear poked with a stick. Tracy is just as determined to do what is necessary to get her daughter back and cause as much trouble between Steve and Becky as possible. Even better if she can manage to break them up!

It may or may not happen, depending on whether Katherine Kelly decides to leave at the end of 2011 or renew her contract.

In a physical fight, I think Becky would have the upper hand. Tracy may have spent several years in prison and might have hardened up a bit but I think Becky still has the advantage here. In mind games, though, Tracy is the expert. Becky is full out, in your face and doesn't think and plan things out. Tracy is about cause and effect. Becky is about impulse.

I really don't want a replay of the Tracy/Karen scenario. I would prefer to see Steve and Becky up against Tracy and having each other's backs but I doubt that's what's going to happen since Steve isn't all that strong and will inevitably get caught in the middle, trying to keep Amy's welfare a priority. Unfortunately, with all this upheaval, Amy's going to be the real loser and if Corrie is around long enough, I think the odds are increasing that she's going to turn out just like Tracy at this rate.
Posted by Tvor at 12:55