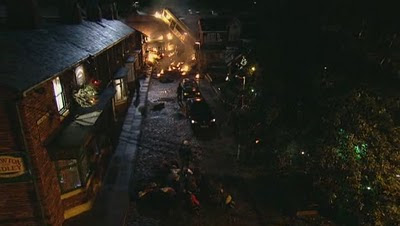 So much to talk about and nobody wants to read a whole book so i think a day by day blogging of the events on Coronation Street this week is probably better for you, the reader, and me the writer. The good thing about downloading episodes is that you can pause and rewind if you need to, just like using a PVR/DVR (Sky+?)

Monday's episodes were setting the scene leading to the disaster, at the end of episode 2 and excuse my language but... HOLY FUCK!!!!

Tyrone to Molly "So you don't love me? Can't you just take pity on me instead?"
Desperation isn't attractive, Ty....But didn't Alan Halsall pull a real blinder? What an amazing acting job he did tonight from disbelieve to sobbing in Sally's arms. Now that he knows the baby isn't his, if Molly dies, will he think that she said it to hurt him and stay in denial? Or will he reject the baby? Molly yet again reaches out for Kevin and he yet again rejects her. He cares but he doesn't want her. This is still a soap, and the truth has to come out at some point. Some how.

Pretty obvious what was going to happen since they had Max slip out of the house last week. Now where has that little bugger got to? Did anyone check the cellar of the pub? I doubt they'll kill off any children though he might be badly injured. Then there's the four kids in Number 13 with Claire. Simon and little Russ were with the little Peacocks. Poor Simon, he's already been through one fire, can you imagine how traumatized that child is going to be?

Carla is bound and determined to stir it up isn't she? She wants Peter and she doesn't seem to have any conscience. She figured she could goad Nick into telling Peter the truth and she could pick up the pieces. Problem is, it may be literally picking up the pieces!

There's joy and hilarity, singing and drinking in the Rovers, but with an undercurrent of regret and desperation as Leanne tries to convince herself that this wedding is what she wants. I still think this thing with Nick is about old wounds, he being her first love and her having a wobbler about getting married. The media says there's going to be a wedding in the live episode on Thursday so it's bound to be a hospital one. So since she was going to marry Peter, will it be him on what may be his deathbed or will it be Nick? Quite often a disaster like this makes people realize who they truly love and I really do believe that she truly loves Peter.

As for Stape, look where his lies have got him? Another death. I thought it would be self defence but it wasn't really, was it? It wasn't planned, it was the "heat of the moment" but he wouldn't get off on self defence, it would be manslaughter if he gets done. And how's he going to explain all the blood in the house? The carpet, the door, you know he might wipe it up but it won't be easy. It did look like he finally realized though and was about to call 999 to report the death, and face the consequences. Finally. But alas, fate intervened and there's a pile of rubble and carnage at the end of the street. Perfect spot to hide a body with a blunt wound on the back of the head. Back to his usual, then. No responsibility taken there, then.

Will Rita cop it under the sweets? It didn't look like any major beams came down but it was hard to tell. I'm going with a concussion. What about Graeme? He was supposed to be in the flat having a night in! That tram drove right into the shop and there can't be much left of the flat. Maybe he nipped out to have a few rounds of XBox with David or pick up a takeway kebab.

The special effects were awesome weren't they? And i mean that in the original sense of the word. My jaw dropped and i was breathless watching it! Seeing that tram chase Molly through the door and the back end of it flip up and crash down on the Kabin? Jesus, Mary and Joseph!!!!

And let's finish, not with lines of the night but with Phrases of Doom uttered:
Carla - Let's hope this is a night where we all get lucky, eh?"
Ashley - It's a stag night, what's going to happen?
John - Anyone can hit a nail with a hammer (and a bigger target is even easier)
Dr. Carter "What's the worst that could happen?" Tina "Well you might not get out of here alive"
Nick to Rita "Seize the day. You never know what tomorrow may bring"
Ashley about Claire "I couldn't live without her" (uh oh!)

Grace Dent's review in the Guardian
Posted by Tvor at 18:52

Those phrases of doom are funny, I picked up on a couple of the foreshadowings.

I was really impressed with the special effects, I thought it might not look very good but it was amazing.

I'm worried about Max, but you're right that they wouldn't kill a child. And poor Simon, he really is going to be very tramatised, isn't he?

It's a shame John now has the perfect excuse to hide a body, he is really beginning to annoy me, would be good to have him behind bars again.

The special effects were good weren't they? You knew it was CGI but for a telly program, i thought they did a great job. Very well done.

Stape-gate is ongoing for now i guess. I hate him too but man, there are that many twists and turns!