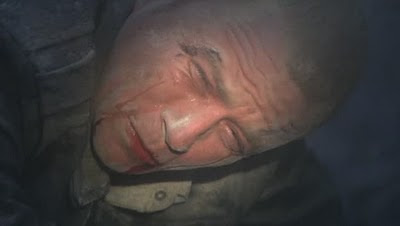 Holy crap, this was even more intense than the last episode!!!


I've seen a photo from next week with a funeral car that has DADDY flowers in it. When i first saw it, there were only three people that had small children that it could be, Dev, Peter and Ashley. Oh the suspense was killing me, especially after the first two days where it looked like Peter was the only one injured of the three! But now i've finished watching Wednesday's episode, where Ashley and Claire exchanged loving voice mail messages, sure sign of doom, that.

It's pretty clear that Ashley's a goner. *sob* Were you in tears as the episode ended like me? The defining moment was when he was coughing blood earlier and said nothing, internal injuries for sure, but kept on helping to get Peter out. Then he was either trapped by a beam or holding it up desperately so Nick could get Peter to the opening but then the whole thing collapsed and he knew it was coming. Did Nick get caught in the collapse too? I think he was close enough to the opening that he'll have followed the EMT guys through behind Peter or he'll have leaped out as the roof came down, and will be seen walking out through the smoke like Rambo after he's blown something up.  Of all the heroes this week, I think Ashley tops the lot.
Here's a video off You Tube with an emotional goodbye  interview with Stephen Arnold and some clips throughout Ashley's time on Coronation Street.

Uhoh, is Sunita is going to pull through? I'm really worried. I expect the internal injuries and bleeding may be just too much. Dev isn't going to find it easy to cope with those two energetic little ones on his own. It looked like it was mainly Ciaran that brought Sunita back out to the front to Dev from the rear. I am surprised Dev wasn't back there in the thick of it too, helping. Maybe i gotta watch that bit again or did i miss where Dev came around as well? Ciaran is probably the second top hero of the night.


I do hope Fiz's baby is going to survive. We've already had Maria lose a 5-6 month gestation baby. At only 6 months along, the baby won't have a very good chance but it does happen. After everything John has done, maybe the only justice isn't just that he's going to jail (he has to pay somehow, at some point, it's soap law!) but that Fiz finally dumps him and he loses the family he was so desperate to keep.

Gail was more or less forced to go to the health centre to help as she'd have first aid training but she obviously didn't stay there because she was back at the crash site tonight. Clearly she's frantic about Nick, just as Eileen was frantic about Jason. Mind you, Dr. Carter set up shop in the cafe. Wouldn't it have made more sense to stay in the medical centre where the drugs and equipment are? But i suppose there's no power there either and the cafe had emergency lanterns. Carla looks dazed. And guilty. If she hadn't urged Nick to reveal all to Peter, they wouldn't have been in the office. Then when they finally got Peter out, she's freaking. I would too if i'd lost so many men in my life to tragedy like she has. Oh speaking of which, where was Michelle? She's usually front and centre shrieking like a banshee when stuff happens!

Eileen is panicked, too, but yay! They got Jason and Simon out the window. And then she smacks Jason up side the head when he's safe. Typical Eileen!

No passengers on the tram aside from the driver and it looks like he survived!

Gary's still in Afghanistan sat in his living room, poor lad. I feel for him, i really do. Why hasn't Anna checked the house?

I really liked the fireman that was in with Molly but i kept hollering "take the freaking baby out man!" Whew! baby Jack is out and ok, with both baby Daddies to see to him! Molly is in a lot of pain and apparently there's a lot of blood. Fireman Paul looks a bit scared at that. I'm sure he's seen it all and he looks like urgency is the order of the day there!

John's off to the hospital, nearly got away with running back to the house to "pack an overnight bag". Yeesh! So the dead body is still in Number 5!!!

Katy? Chesney? Wouldn't they have come running after the explosion? The flat is only round the corner.

Rita still seems to be alive. She tried reaching for her mobile but nobody knows she's in there! I bet Max is in there too.

Kylie!!! What the heck?? Is she back for more money? She wouldn't have known about the crash obviously. Fat Brenda from Streetcars twittered that she could smell a compensation claim all the way from Aya Napa! LOL!

Lines of the night:
Simon "It's a bit smoky up there!"
Ashley to Nick "I'll do it, you've got your best clothes on, don't want to get them mucky"
Norris "The vision of Hell itself"
Posted by Tvor at 18:49

It was mentioned in one of the other episodes Diane that Michelle is 'sorting Ryan out', but I forget where he went, was it Ireland?

Oh right i remember now. Glasgow yes. He's been up there for 2 months. Why does he need sorting out now? Sheesh. I don't mind really, i'm glad to see her not in it for a change. It's really weird not to have Liz there though.

These are nice write-ups, tvor. It's been so intense that it's great to "hear" other fans say about what's gone down on the cobbles this week.

I had forgotten that Carla pretty much sent Nick & Peter into harm's way, and Ashley to worse. Not directly of course, but it's always been hard to see guilt in her face. She's a dark one. Did she yearn to go with Peter into the ambulance after rescue? Probably a combo of these feelings.

I loved little Simon, calmly smiling with that great comment. I hope he stays on Corrie for a long time as he adds brightness during strange times. Perhaps a little too responsible though, growing up with an alcoholic Dad.

I also loved the way several people would keep saying how glad they are that Rita is NOT in the Kabin or at home. My nerves are shattered!