The many loves of Sally and Kevin Webster: Part 1

This latest and entirely unsuitable affair of Kevin's with the late Molly Dobbs is only the latest in a long line of affairs and infatuations but both Sally and Kevin. While they are in no danger of breaking the record of Ken Barlow, they've racked up a respectable number between them. They've actually cheated on each other twice each, with a couple of near misses on Sally's part. (i.e. crushes or affairs while separated but not yet divorced). 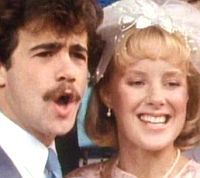 Through the years, then, these are the loves that have touched the Websters:

When we first met Kevin, he had a girlfriend called Michelle but once he met Sally, there was nobody else for him. Sally liked Kevin but had a thing for handsome Terry Duckworth at one point. They were necking in the pub once, resulting in Bet Lynch snapping "This is the Snug, not the snog!"

Still, Sally and Kevin were destined to be together and married in 1986. They were Love's Young Dream for awhile, becoming parents to baby Rosie on Christmas Eve in 1990. In 1993, Sally started minding a little boy who's dad, Joe Broughton, developed a crush on her. He even wanted her to run away with him. This was entirely one sided and Sally had no intentions of leaving Kevin, as annoying as he could be at times.

Kevin was never tempted until 1997 when Sally was in Scarborough nursing her mother. Natalie Horrocks moved in for the kill and seduced him. He fell hard and when Sally finally did find out, Kevin was out on his ear. It wasn't quite so much fun once Kevin moved in with Natalie. No more sneaking around meant no more thrills. There were temporary separations and Sally begged Kevin to come back but he and Natalie had made up by the. Not long after, Sally formed an attraction to Kevin's employee, tall and handsome Chris Collins who had recently finished with Angie Freeman. Kevin thumped him when he found out but really, it was none of his business, was it? 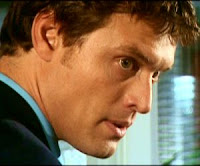 Alas, the ardour between Kevin and Natalie went cold and eventually Sally took Kevin back, mainly for the sake of their two girls. Sally was working for Mike Baldwin by this time. Also working for Mike was Les Battersby's tricky son, Greg Kelly. After Sally's mother died, she inherited a good size chunk of money. She refused to give it to Kevin to buy the garage outright and Greg, with pound signs in his eyes, set about wooing Sally to get his hands on the cash. Kevin threw Sally out when he discovered the affair. She moved in with Greg but had to leave the girls with Kevin.

This was an ill-fated affair to say the least. Sally used her money to set up Greg in a new business and worked in the office for him. She managed to get the girls living with them and this didn't sit well with Greg. Tempers flared and Sally ended up with a bruise when Greg lashed out at her. He convinced her it was a one-off but you know how these things work. He hit her again and she left him and moved in with Rita while the girls went back to Kevin. Greg continued to harass her and came after her one last time but she managed to escape a beating and Greg soon disappeared from Weatherfield. 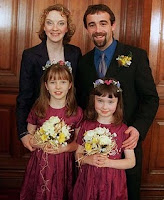 Just as Greg disappeared at the end of 1998, Kevin meets Alison Wakefield, one of the factory workers. He sues Sally for divorce and intends on getting custody of the children. Sally, by this time, has met a nice young man, Danny Hargreaves, who has a stall on the market where Sally has been selling Underworld seconds. Greg Kelly makes a reappearance to terrorize Sally but she manages to bash him over the head with a chair before the police cart him off. Whew! Sally almost loses Danny to Sharon Gaskill because she had been waffling about whether to date Danny or not but she decided she did want Danny who was only making do with Sharon anyway. Danny moves in and he and Sally are all loved up. Or are they?

Alison thinks Kevin really hasn't got over Sally and leaves him but when Kevin finds her on New Year's Eve 1999, he also discovers she's pregnant and he persuades her that he really does love her and wants to marry her. On the night before he gets wed, however, he has a one night stand with Sally but it doesn't mean anything, and Sally sends him back across the road to marry Alison, which he does. Sadly, in June 2000, their tiny baby Jake is born, contracts an infection and dies. Alison is so distraught that she steals Sara Louise's baby Bethany. Bethany is recovered and Alison chucks herself in front of a lorry and dies!

Meanwhile,Sally and Danny decide to open up a shop and rent one of the new premises on Victoria Street, calling it D&S DIY. Danny isn't really happy and is out of his depth. The shop doesn't do all that well but they make plans to get married anyway. Even that isn't as smooth and romantic as it sounds. Sally delays answering Danny's proposal and when she does, Danny wants them to move away and she's reluctant to take the girls away from Kevin. There's lots of arguing  and jealousy between Danny and kevin and by the Danny finds out about Sally and Kevin's one night stand he jilts her and walks away from the whole mess leaving Sally with the shop which is a struggle to keep open with the help of Jason Grimshaw who developes a bit of a crush on a horrified Sally.

It's not too long before Sally has a new fella. On a family camping holiday where she and the girls tag along with Martin and his lot and Roy and Hayley, Sally and Martin discover that they have a mutual attraction. They embark on an affair. Well after all, they're both divorced, aren't they! Mind you, when Kevin gets whiff of it, he does what he does best, and goes after Martin with his fists. Kevin still loves Sal, you see, and never did get her out of his system. 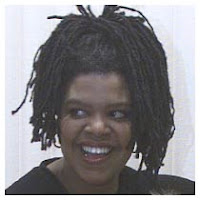 It doesn't stop Kevin from making friends with local nurse Molly Hardcastle and eventually having a fling with her. But yet again, Molly becomes another woman that knows she can't measure up to the ghost of Sally in Kevin's heart and she's off in a taxi. Sally and Martin's relationship ends when she is not ready to let him move in with her and he takes a major wobbler.

So now Sally and Kevin are both single again. Check out Part 2 to find out the rest of the story.
Posted by Tvor at 18:38