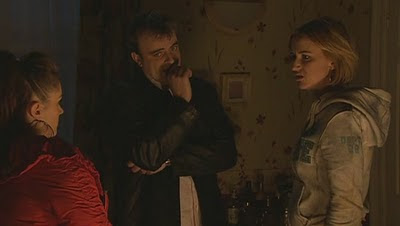 Happy Birthday Coronation Street! Today is the official golden anniversary of the first episode in 1960 and they gave us an episode with pain, grief and a little bit of hope.

People comforting each other, clutching onto their loved ones that they could have lost. Kirk and Maria, Lloyd and Cheryl, Eileen and Jason. Trying to support the grieving ones and keep up the spirits of others. It's all community, isn't it?

Nick is walking out under his own steam. I knew it! Where was Gail? She'd been there and not with the doctor and when Nick finally came out it was David and Audrey that ran to him and David in hospital with him. Huh? Gail would normally have had to be surgically detached from him, much like Eileen to Jason! Her absence was glaring. And there's David and Nick hugging in hospital, the last thing you thought you'd see, isn't it!

Oh that bitch that bitch that bitch! Kylie had Max the whole time (Whew, at least he's ok, though!) and she wants more money! And if that were me, i'd tell her to keep the kid and shop her to Social even if i got in trouble myself. She already had £20,000 and she only wants another £5000?? What does Becky do? rob the safe in the shop's back room while the crew work on getting Molly out in the front of it and  Stape drags poor Charlotte down the ginnel. 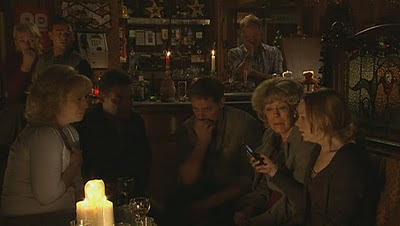 Mary's over the top dramatics over Norris and giggling was just jarring next to Claire's grief and anger which was heart wrenching and everyone else's sober sadness. I suppose she was there for comic relief from the tragedy but i just found it off-putting this time around though i normally do find her amusing. Surely even Mary would be more aware of others' suffering and be less jovial and giggly under the circumstances?

I'm surprised Claire didn't insist on staying to see Ashley brought out. Maybe it would be awhile anyway because of the roof collapse. But calling herself a "widow woman"??? Didn't that term go out with the ark? It was chilling when she played the message from Ashley in the pub! The hairs on the back of my neck stood up and i don't mind saying, i was in puddles!

Sally insisted on sitting with Molly. You wouldn't have thought she'd have felt like that close a friend but i suppose delivering the baby gave her that bonding feeling. That, and the fact that Tyrone went to the hospital with little Jack. Wow, i didn't expect Molly to confess, though. That sure shocked Sally to her core as she drew back just as Molly took her last breath.

Peter .... I really thought he'd survive but it doesn't look good, does it? How much loss can Ken take? Carla looks so isolated, doesn't she? Could she actually stand there and watch Peter and Leanne marry? Could she stand not to if it's Peter's last moments? No, she couldn't stand it and fled the scene. How long did that marraige ceremony take?! War and Peace was flaming shorter! I can't believe they'd make him repeat all that. Still, tonight ended with Peter in cardiac arrest. If they can get his heart going again and the specialist gets there,... and if Peter can live through surgery... "if, if, if"....I really, truly believe he will live. I think we'll know for sure tomorrow though the early newspaper reports seem to count him out. Are they letting the cat out of the bag? or are they speculating?

Well, Ian Wylie brings up an interesting point over here. I did hear the EMT people talking about someone else that had died, someone that had been driving by as the crash happened. Ian is wondering if that is meant to be significant (i.e. the fourth death) or not. Very, VERY interesting and i predict he's not called "Wylie" for no reason! He could be on to something there. Ashley, Molly, passerby, Charlotte. It adds up!

Sunita looks fairly chipper, considering and i thought she'd be one of the soon-to-be dead. Gary certainly doesn't look too good, racked with guilt and still half in the horrific firestorm he must have endured. Even Eddie looked shocked, sitting in the pub.

Tyrone and Kevin realize the baby needs a transplant but he didn't look to have lost much blood. I'll have to watch again to see if i can catch why they are even thinking it's a possibility. Kevin knows he's the dad but he can just say he'll donate blood because he might have the right blood type anyway if it's not a rare one. And what was to stop him donating blood while Tyrone went back to the street? He did tell the doctor but will Tyrone find out? Sally knows now too! 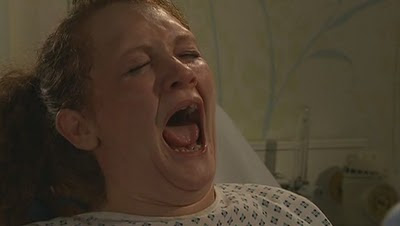 Fiz had her baby and they whipped it away. No crying but i don't think a baby that young probably has the lungs for it anyway. Still, there's hope for Hope. We didn't see John's excuse for getting away from the hospital. Presumably he left Fiz asleep and recovering.

No surprise seeing John hide Charlotte's body near the rubble, you'd think he might even get away with it except i have no doubt that if Fiz finds out Charlotte's died or injured, she's going to have a few hard questions as to why Charlotte was in the neighbourhood in the first place. Did you see John's face, frozen in shock when he heard the EMT say Charlotte still had a pulse?

Poor Fiz's going to have to endure more lies from John the Deceiver in another twist in the Stape-gate scandal. There are more twists and turns in this storyline than in my tangled Christmas lights in the box in the closet! Just when you think you've found the end, there's another knot! When i knew Stape was going to kill Charlotte, i knew he'd use the accident to hide the body and pretend she was caught in it. Does a brick in the back of the head look like the same kind of wound as a  hammer, i wonder?

You know, it's got so quiet! The last three nights there was a lot of noise, people, machinery and tonight there wasn't really a whole lot out on the street aside from a bit of motor sounds. I suppose they aren't able to add the sound effects as they're going out live.


Lines of the night
Sally to Fireman Paul "You're talking, you aren't doing!"
Fiz "AAAAAAAAAAAAAAAAAAAAAAAAAAAAAAGGGGHHHH!!!!! No, i'm fine!"
Dev "It's just bricks and mortar" (and you have 4 or 5 more shops anyway)
Leanne to Nick "You're the past"
Molly to Sally "He chose you because you are beautiful inside and out"

For my own records as much as anything:
Here's the MEN's review.
The Guardian's review
The Daily Mail
Posted by Tvor at 20:48

Thsnks for a brilliant write up. I haven't watched Corrie regularly for a long time, despite being brought up on it, but I think I may have to in future. I thought the live episode was brilliant. Can't wait to see what happens between Kevin and Sally. Also whether anyone finds rita before it's too late.

I can only agree re. Peter. I just didn't expect Chris Gascoyne to be going - so like yourself am thinking surely they'll be have to pull him through. Awful gap in Corrie in they don't.
re. Kylie - I was also thinking, Steve/Becky, phone Social Services NOW and make this STOP. It's all going to come out before too long anyway.

Well it has to come out about Max doesn't it? Soap law and all that. I really think Ken Barlow has lost too many people and this time they'll manage to save Peter.

@Annie, The Kevin and Sally stuff should be brilliant, i think. But i am looking forward to seeing how Tyrone is going to react and i hope he punches Kevin's lights out!