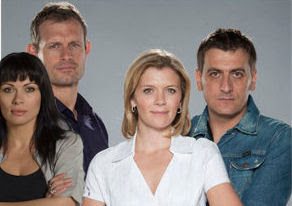 Love triangles are classic soap stuff. We've had what is in effect a quadrangle on Corrie recently. There's Nick, Peter and Leanne forming the main triangle but there's Carla too, who has an unrequited thing for Peter, forming the fourth arm of the geometric drawing.  So what's next for these four?

Leanne dragged Nick off to a quiet spot in hospital to tell him about marrying Peter.  He accepted it but still lurked around in the corridors while the ceremony went ahead. That little snap/crackle/pop sound you heard was his heart breaking.

Leanne really does love Peter, I knew it all along. She told Nick he was the past and I think that's exactly where the fling came from. It was all about unresolved feelings and old hurts and yes, old attractions at a time when Leanne was facing committment, something she doesn't do all that well. She called it the Battersby gene.

I really hope she's not going to get pregnant and we have to suffer another "Who's the Daddy" story so soon on the heels of the last disaster of an ill-received affair. I have a feeling Nick is going to move on sooner than you think in a big rebounder. The two possibilities i see it being are either Carla or Tracy Barlow who is more than willing to put it about. She's been in the nick for a couple of years so she must be feeling like a cat in heat. A cat with big claws, as Steve and Becky are probably about to find out.

Carla? Well she's got a broken heart, too, right? It might be logical for her and Nick to seek refuge together. They could start off having a mutual pity party in the pub, get drunk, and Robert's your mother's brother! Yes, i know Carla is struggling with sobriety but the loss of Peter to Leanne (or worse) could send her back over the edge at least temporarily. Or the horizontal bop (boff?) could happen sober. Either way. It's just a guess, not a spoiler.

This is all hinging on Peter's survival, of course. I maintain my position at this point, with tonight's episodes still to be aired, that they won't kill off yet another of Ken Barlow's immediate family or leave Simon an orphan. Come on, we've got Ashley, father of two, dying and Molly, mother of an infant dying. It just isn't logical for a soap that all three victims will be leaving children behind like that, especially one having lost both parents.

What say you, dear readers? What's next for Peter (if he survives), Leanne, Nick and Carla?
Posted by Tvor at 12:13