I'm Corrie Crazy, this proves it 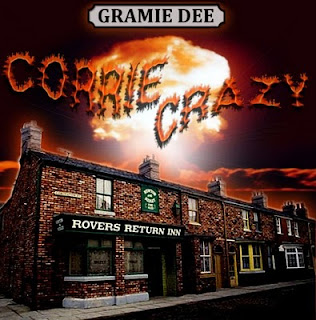 Everyone knows I'm Corrie Crazy. I've even been in a documentary about crazy Corrie fans. My fiance, Graham, aka Gramie Dee is a fan of the show but agrees, i'm closer to the original definition of fan, aka a fan-atic than he is. Still, we met because of the show (met in a corrie chat room) and we discuss the show sometimes, have visited the set and have lots of corrie friends in common.

He's a musician and graphic artist and every year for Christmas he writes me a song. Usually they are songs about us and our relationship. You can hear them all on the "jukebox" player on my personal website here.

This year, because we both participated in the documentary, he's written a Corrie song for me called Corrie Crazy. The photo here is the "cd" artwork he's done and below are the lyrics. You can hear the song either on that player on my website or
follow this link.

Because he lives in Salford, near Manchester and the Granada Studios, and i live in Canada, we open our Christmas pressies a bit early, watching each other on the webcam. This year was a Corrie Christmas all around nearly, he sent me a lovely coffee mug with leopard print and Bet Lynch on it with the slogan "I've got tights older than you!" and he sent me a clock for me wall with Hilda Ogden on it, very useful as my old clock doesn't work anymore!! You can see it below sitting on the TV Times for Corrie's 50th that the lovely Flaming Nora sent me! He also gave me an ebook reader. Now if i can just find out if i can get the 50th anniversary book in epub format, I can carry Corrie with me all the time! ;)))) Just kidding! 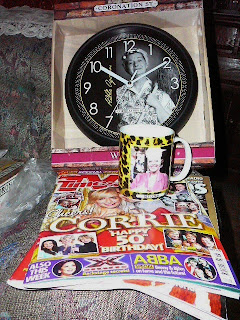 Ever heard of Ken Barlow?
Or Kevin Webster does he ring a bell?
How about Roy and Hayley?
Maybe Sunita do you know her well?
I know someone
Who can name everyone
Of the people on that famous street
What she doesn't know
Ain't worth getting to know
Her expertise can knock you off your feet

Remember Ena Sharples?
And Minnie Caldwell as her faithful tug?
But can you name the third person
Who used to join them in the Rover's snug?
The gargantuan task
Of all the questions you'd ask
Can be directed to the one I know
From the hard to sublime
She'll get it right every time
And then she'll even add a little bit "to go"

Talk about Alan Bradley
Making sure that Rita's fate was sealed
Then we had Richard Hillman
The Doctor Lecter of Wetherfield
Bradley got in a jam
When he caught the wrong tram
And on the Promenade gave his last wave
Richard Hillman went down
With a terrible frown
As he drove in to a watery grave
Posted by Tvor at 19:23