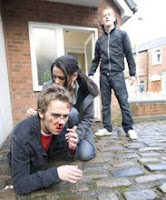 Spoilers say David Platt is going to get beaten to a pulp (yet again) after he takes his jealousy out on Jason. A comment on that post by Danny-K mentions how Gary's first beating of David was unusually brutal for early evening telly. Yes it was, but they'd been portraying him as a thug from the get go. Now, it seems, Gary isn't so thuggish. I guess that's the Powers That Be's way of softening him a bit because otherwise there would be no way to redeem him if they want the character to stay in the show for any time. And then there's Gary's "mentor", Uncle Len, also a thug but not quite so thick and ignorant as our younger ginger version.

Considering my experience watching soaps all these years, when there's a mystery and a crime is committed, the party accused is almost never the perpetrator. The guilt almost always lands on the expendable "crew member", aka "Ensign Toast". That goes back to Star Trek days when the "away" team to investige the new planet always ended up with one of them dead or evaporated into phasar bits and that was always the guy that you'd never seen before, never one of the main characters. The expendable crew member. He often wore a red shirt so some people call him Ensign Red Shirt. On soaps, there's always an Ensign Toast. It maybe a major character if the actor is leaving the show like Kate Ford (Tracy Barlow) or it's a villain that has hit the wall and there's no redeeming them. It may, on rare occasions, be a sympathetic main character in a moment of madness or self defence.

So who's going to be the one that beats up David? I reckon eyes will turn towards Jason but we all know Jason is a softie. Jason's a lover not a fighter. Will it be Joe, in a drug withdrawal rage, discovering that David has nicked his pills again? Not likely. It's going to have to be an expendable crew member and my money's on Len Windass in retaliation for David's lies that put Gary in jail. There's no earthly reason for Len to be in the show as he only ever seems to interact with his family, and occasionally Joe or Gail and there's really no redeeming value to him.

Does David deserve it? I don't think so. He deserves to go to prison himself for setting up someone else, mind you. If Len's the culprit, are we going to then see Joe's fists flying? He *might* be able to take on Len but in his current physical state, not likely. (Come back, Terry Duckworth, all is forgiven! ... well, when you need someone that can apply a good thumping to your everyday neighbourhood thug, Terry's yer man!) This whole "war in the hood" business between David and Gary (and Len) doesn't seem like it belongs on "our" Coronation Street. It's more "The Show That Shall Not Be Named", innit? I think it's a mistake trying to win over the fans of that other show, don't you? Coronation Street is never going to be anything but what it is and always has been. It's got it's own personality and vibe. You may lure a few fans into the fold but they won't stick around. 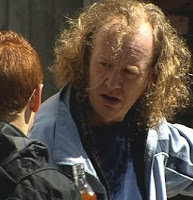 I don't think the Windass family is going to last on the Street, Anna is the only one that's somewhat sympathetic but she's ineffective and Eddie is just gross. Unwashed, a layabout, I didn't think it was possible to find a character more despicable than Les Battersby but they managed it. Mind you, the actor, Steve Huison, is doing a bang up job of portraying Eddie Windass and he's a far better actor than Bruce Jones was. I actually think if they softened Gary just a little and got rid of Len, that the family might be able to integrate with the neighbourhood but that's a big IF.
Posted by Tvor at 10:42

Ah yes, the 'Ensign Toast' character best exemplified in that parody of Star Trek: "Galaxy Quest" (1999 film) that was truly hilarious with a simply gorgeous Sigourney Weaver (she plays a busty beauty) taking the pi$$ out of her Alien performance.

- and 'Ensign Toast', or as he kept saying, "I don't want to be called Kowalski, 'cos Kowalski always gets it."

There are numerous sites on the internet devoted to highlighting the lines from the film. Here's a couple where Fleegman first learns what his name is in the script, (they're actors on a TV 'Star Trek' show where by accident, they find themselves alone on a real spaceship and everything is deadly serious - and for real:

[the crew is on a shuttle descending to an alien planet]

Guy Fleegman(Kowalski):
I changed my mind. I wanna go back.

Sir Alexander Dane (Cpt Kirk type):
After the fuss you made about getting left behind?

Guy Fleegman: Yeah, but that's when I thought I was the crewman that stays on the ship, and something is up there, and it kills me. But now I'm thinking I'm the guy who gets killed by some monster five minutes after we land on the planet.

Jason Nesmith: You're not gonna die on the planet, Guy.

Guy Fleegman: I'm not? Then what's my last name?

Guy Fleegman: Nobody knows. Do you know why? Because my character isn't important enough for a last name, because I'm gonna die five minutes in.

Gwen DeMarco: Guy, you have a last name.

Guy Fleegman: DO I? DO I? For all you know, I'm "Crewman Number Six"!
- Did you guys ever WATCH the show?

Sir Alexander Dane: Are we there yet?

Guy Fleegman: I'm just a glorified extra, Fred. I'm a dead man anyway. If I'm gonna die, I'd rather go out a hero than a coward.

Fred Kwan: Guy, Guy... maybe you're the plucky comic relief. You ever think about that?

Guy Fleegman: Plucky? HEY! Don't open that! It's an alien planet! Is there air? You don't know!

[Guy holds his breath. Kwan sniffs the air and shrugs]