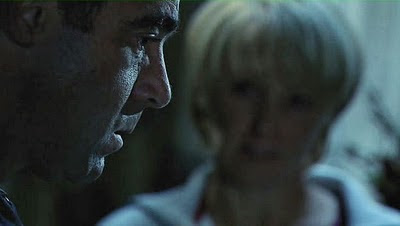 And so we reach the end of the Anniversary Week. With a crash, carnage, and fire, with birth and death, trauma and dark, dark places. I don't mind saying i shed tears more than once and completely lost it at the end during the U2 musical "montage".  What a week! Not a lot to smile about, aside from the occasional line.

Opened with Sally holding a devastated Tyrone. I cried. After handing him over to Maria, his former fiancee, she went and sat in a dark house while Kevin looked all over for her. Kevin didn't even seem like he was pretending to hold back his grief for appearances sake when he found out. It would have been ok for him to show a bit of emotion, wouldn't it? Everyone would have believed he was grieving for a friend. I'm sure Kevin must have some caring feelings left for Molly at least. He didn't hate her. 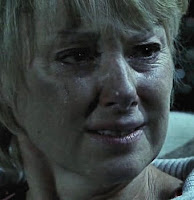 When he found Sally, she looked at Kevin with utter betrayal and i think she's haunted by sitting there watching Molly die. Sally's little eulogy about her was also pointed, meant to make Kevin uncomfortable a bit too. All that talk about marriage and the baby's real father? Dig, dig. and finally she lowers the boom, she knows it all and Kevin's face drains.All their scenes were mesmerizing, they really were!

Sally came up one side of Kevin and down the other. She called him on every single lie he told, called him on every excuse he tried to use. She accused and she castigated him. She knew exactly what happened, why he stayed and boy, is she bitter! She's not stupid, is our Sal. She figured it all out and chucked him out on his ear and I cheered!!!!!! I've been waiting for this since last year!!! Life's too short, as she said, to waste it on someone that betrays your trust like that. And by the end of the night, her world was shattered. But she'll be ok. She survived cancer and she'll make a good life for herself without Kevin. You won't see her take him back again. The girls are grown up so aren't an excuse like last time.

Claire finally broke down altogether in Becky's arms and Graeme's completely gutted. Ashley was probably even more of a best friend than  even David. Probably because Ash was Graeme's mentor, too. As he'd said the other day, Ashley was the first person that ever really believed in him. I think Graeme will do Ashley proud as he matures and gets on with life.

Becky the thief!  I still can't get over her walking into the back of the shop and nicking the cash when the front of the shop was totally destroyed and they were in there helping free Molly. That shop isn't that big and Molly ran back towards the back office when the tram crashed into the side of the building. She couldn't have been more than 10 feet away from where Becky was yet there was no sound, no noise of the equipment or the rescue workers while Becks was in back with the safe. Anyway, Steve was right, Kylie will only come back for more and more money. 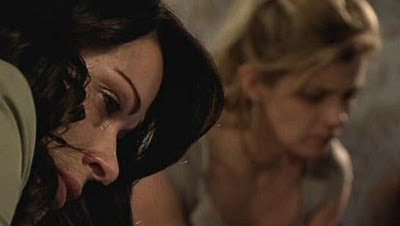 Ken keeps vigil while they wait to hear if Peter survives surgery. I have to say, I've never found William Roache to be that good an actor. Well, i should say when it comes to emotional acting. He rarely shows it other than, on occasion, real anger which he can do well. Emotions? He's utter crap. It's always a deer-caught-in-the-headlights look. One pundit described it as looking slightly pained.

Peter's in surgery as the episode opens and Carla's had a bracing brandy (or four) before heading back to hospital but now Leanne realizes there's more to Carla's grief over Peter than just as a friend. She figured it out, Carla was "Carl" and the herd of cats have leapt out of the bag, a friendship has been blown to bits, quite spectacularly, too. Not a great stunt job, though, Leanne smacking Carla. You could tell she was miles away and the sound people didn't really get a good *smack* sound in there.


Rita! It was Nick that'd seen her before the crash! I couldn't remember but i knew someone did and hadn't gone back yet to rewatch and find out. I had faith that they wouldn't do in Rita, I think she's tougher than old boots, is Reet and Emily agrees! She also threw out the line of the week! "What is it wi'me an' trams!" It was one of the few smiles in the episodes tonight. 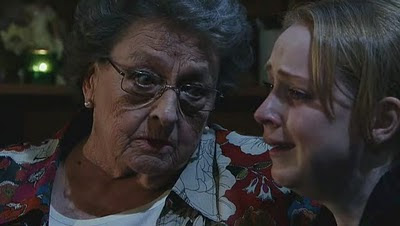 Oh there's Betty, too! What a rock she is! I expect Betty Driver probably wasn't up to the live episode but it's so good to see her be steady and holding Claire like a granny would. (Where's Claire's mother? Maybe she's already in France)

John nearly had his mucky hands all over the plug and now Charlotte's parents caught him with her. They think he's Colin, but surely some of the emergency room staff know who he really is. Or maybe not, i suppose he's spent most of his time in the maternity ward. John managed to "kill" Charlotte anyway, agreeing with her parents to let them take her off life support. D'you know i really think Stape has a disorder of some sort. He was absolutely unperturbed about Charlotte, didn't even look fazed at all. Oh yes, unplug her. Well of course that solves all his problems. He thinks. He had one weak moment when he almost called 999 but he was saved from the final confession just in time by disaster and disaster saved his sorry ass. For now. But it ain't over til it's over.

Finally! Mary's not smiling or giggling but she looked a bit jealous of his feelings for Rita. Ciaran was a real rock and a comfort. Roy and Hayley, too, dispensing soup and hot drinks and providing refuge. Gail reappeared, and didn't even have more than a quick hug for Nick. I suppose she'd already been told that he was ok, wherever she was hiding. With the doctor, helping out i suppose. Bill and Pam finally appeared. It feels like people have been taking ages to show up when really, the whole week probably only took place over the course of about 3 or 4 hours, it's still dark outside with no dawn even threatening to break by the end of tonight. I'm sure traffic in the area is snarled and streets are blocked off so it would take people longer to get back to the neighbourhood. When Pam found out about Molly, my heart broke for her and i cried. Again.

Wait, if nobody was allowed to go home, how come it was ok for the pub to stay open and have people in it? No electricity there, either,  or even over on Victoria Street but surely over there would be safer. Janice could have gone back to her flat with a few people, too as she lives over the butcher shop.  I can see the first couple of houses past the shop and Number 13 but the other houses on the new side are stand alone and were structurally ok, and if the pub was ok, surely the first few houses were as well. That wouldn't have been as poignant though, would it? Picky, i know!

Line of the week
Rita "What is it wi'me and trams!"

Lines of the night
Tyrone "She's dead, Maria!"
Kevin "No lectures. Not tonight Dad" (you've got the mother of lectures coming your way later, me laddo)
Carla "You didn't choose Peter. You married him for his expiry date" (Ouch)
Sally"What's Tyrone done to deserve this?" (and she means more than the obvious.)  and "Did you bother running or was that just fancy dress?" and "Nothing like a tumour in your wife's breast to shake you out of a midlife crisis!"  (and pretty much all her painful invictive)
Posted by Tvor at 19:03

I'm not so sure about what Sally's going to do. Yes, the girls are grown but now there's little Jack and the way Sally spoke to Molly about how a child needs a mother, how a father doesn't do a lot of the little things for a child that a mother does without thinking twice, combined with the bond Sally has already formed with the baby. I just can't see Sally being able to watch Kevin flail around trying to care for the baby on his own.

I enjoy your blogging here and on the Coronation Street blog. Cheers.

Thank you!
It will be interesting to see what happens here. At the moment, Tyrone is keeping the baby but chances are he'll soon find out about Kevin. What happens then is anyone's guess. Will he kill Kevin? probably not but he'll be more betrayed than he ever has been and he'll have lost everything. Just everything.