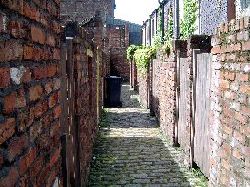 You hear me wibble on about "Soap Law" now and then. I've been watching soap operas since I was a kid and over time you get to know how they work.

Soap Operas and dramatic serials started out on radio and had a definite religious and moral slant. Many still do in America though on the UK soaps, it's less "preachy" and I'm glad of that. I don't mind religious reference now and then, because each character generally has a belief or spirituality of their own. For instance,  Dev and Sunita may make a comment about not eating beef due to their religion. I like the storyline that Sophie has been in, where she's started going to church. It gives us another point of view.

Anyway. Soap Laws don't really have anything to do with religion though they do have something to do with morals and justice at times. When you start to realize that there is a code of laws, you can get pretty good at predicting the outcome of a lot of storylines, more or less.

Here's a partial list of the most common ones I've gleaned over the years: 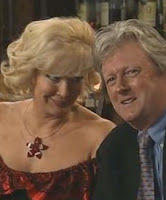 Love:
If two people meet and hate each other, they will end up being the loves of each other's lives. They will be hot and steamy, will break up and make up numerous times.

Few couples can stay happy for long. (Even Roy and Hayley have had some whopping crises that nearly split them up!) Something or someone will endeavour to break them up, sometimes permanently, sometimes not. Star crossed couples usually end up back together in the end because the viewers demand it if both actors remain on the show or can return to the show.

Drunken one night stands can often lead to love and marriage. (Steve and Becky!)

If a third party connives and tries to break up the loving couple, there may be some doubts but the loving couple will see the conniver (who is sometimes a psycho) off or may temporarily break up but the conniver will be caught out eventually and be put out. (Ashley and Claire broke up and Casey moved in on Ashley but was exposed as a nutter)

Some people are perennial losers in love. They will never find "The One" and if they do, they won't keep them. Fred Elliott died on his wedding day. Curly Watts (revealed in the Knight's Tale dvd) is divorced from Emma. Eileen can't find a decent man for love or money!

Murderers (or other major crime):
If there's a murder *mystery* (or other major crime/assault etc)  where the viewer does not know who the perpetrator is, you can be sure of this: the person arrested is not the one that did it. They have been arrested because they either have a very good motive or have been overheard saying "I'll kill/get you for this!", or have been very cleverly set up.

If the guilty party is the one arrested, it is usually self defense or a moment of madness/passion and they get off lightly. There will be a dramatic trial. Sometimes this is where the real killer will be revealed but sometimes there is a wrongful conviction. Most of the time, the guilty party is a minor cast member or a new cast member. This is the "Expendable crew member" corollary. (Toyah's rapist was a minor, incidental character, not the main suspect, Peter Barlow)

If the guilty party is a major cast member, then it's one that we already know is leaving the show. If the arrested but not guilty person goes to prison, they are unjustly convicted and it won't be long before they are free. It comes down to this: The murderer will never get away with their crime, regardless of whether they are a major or minor character. They will either go to jail or will be killed in some dramatic fashion. But it comes down to this...

If the viewer does know who the murderer/perpetrator is (i.e. Tracy Barlow, Tony Gordon), it's only a matter of time. There will be consequences. They'll get caught in the end and pay one way or another, imprisonment, or death. If there are no consequences, there is usually an extreme extenuating circumstance or it is a popular villain that will go on and on getting away with things on technicalities. That's usually mostly the realm of American soap villains.

If a woman faints or swoons, she's pregnant.

If a woman has sex with someone she shouldn't, either an affair or a drunken one night stand, or has sex with two different men in a short period of time, odds are very good she'll get pregnant and, in that last case,  not know who the father is. (Molly Dobbs, most recently) It doesn't always happen but the truth of the affair/one night stand will always come out eventually, especially if there is a betrayed partner involved. The paternity of the baby may depend on what's going to cause the most trouble long term.

Only a small percentage of babies are born in hospitals, mainly the premature ones or very lucky ones. The rest are born in remote uncomfortable, unsanitary, and possibly dangerous locations, in cars, on living room floors, in pub booths. You get the drift. (Sally gave birth to one of her daughters in the back of a taxi, so her other child had to be born safely.)

Accident aftermath:
If a character has been in some sort of accident, chances are good that they will have one of the following results: Amnesia, blindness, paralysis. It will be temporary with a "miraculous" recovery or with a brief period of physical therapy. If someone is near-fatally injured, if they survive surgery (depending on if the actor is remaning on the show or not), they will recover, though likely with one of the above temporary disabilities. (Jim McDonald was paralysed after a fall and it seems Peter Barlow may be as well, post-tram crash). It is unusual for an injury to be long term but it does happen from time to time. 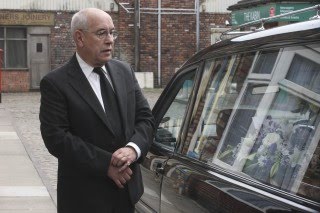 Death:
Funerals are often be interrupted by drama but are usually fairly respectful.

This mainly applies to American soaps. If someone dies, chances are pretty good they didn't actually die, even if you see the body and the death. They may have amnesia, they may have been kidnapped by a dastardly villain and held hostage for years, they may have faked their own death. It all depends on if the character is played by a popular actor who can be lured back to the show. If the original character is, in fact, dead, the returned actor will be their identical twin/lookalike.

Twins:
Will always be of opposite temperment. One bad, one good. One troubled, one on the straight and narrow. This is especially true if they are of the same sex, otherwise, boy/girl twins can be of similar temperment, usually high spirited, troubled, or trouble-making. One will always support the other and even cover up for the other or take the blame for the other's crimes and misdemeanors but may be swayed to the good and away from the dark side, especially if the bad twin is psychotic.

Weddings:
Soap opera weddings are usually elaborate affairs, even when they're low key and "intimate".

The road to the wedding is not going to be smooth.

Chances are the wedding will get called off at least once and there's a very good chance the wedding itself will be interrupted . Jiltings are common, often with a dramatic announcement in front of the Registrar and all their family and friends. (Jim McDonald exclaiming the he loves bride Fiona Middleton and please don't marry that plod, DCI Alan! Tracy Barlow retrieved her baby and revealed the groom is the father and it very  nearly got her spiked with a red stilletto. Abused bride Shelley roundly dumped nasty Charlie Stubbs at the altar.)

An interrupted wedding may or may not finish or it may finish and then disaster will hit. At the very least, the bride or groom or both will be scrambling to get to the wedding on time. If it all goes according to plan and the happy couple are knotted together, there will be other circumstances elsewhere...a wronged lover, a death, or the wedding has gone ahead though one of the couple has had serious doubts or a big secret yet to be uncovered. Smooth and effortless weddings may have a nasty surprise at the reception (Becky and Sunita were both arrested of false charges at theirs). Deathbed weddings mean the survival of the ill.

Other random laws that come to mind:
- If a woman has to do some major running, she will be wearing high heels and have to quickly take them off or she struggles and stumbles during the escapade.
- If there is an argument with someone and anywhere near is a cold beverage, it will end up thrown in a face or dumped over a head.
- Mothers-in-law rarely approve of their son/daughter-in-law.
- Parents usually have blinders on when it comes to their children's faults.
- In Coronation Street, at least, most people will find living accommodations and/or a job within the immediate area of the neighbourhood

These are just some of the Soap Laws. There are always exceptions to the rules, of course. But on the big things, they don't vary too far from the standards.

In addition there are SOPODs, aka "Soap Opera Phrases Of Doom".

Basically, they work like this:  someone will say how happy they are, or comment that nothing could come between them and their loving partner. Maybe they'll say "We're/I'm so lucky/blessed". Uh oh. You've just jinxed it. Bad Relationship Luck will come down upon you like a ton of viaduct bricks. You can always spot a plot twist coming when you hear a SOPOD.

If two people are talking on a sidewalk and a third one comes along, after a brief chat with all three, the third one will walk between the two original ones, not go around the couple.

Beds are not made of mattresses, but hard boards so that there is no bouncing when one gets up. They have L shaped sheets too so the man shows his chest and the woman is covered.