Me and Coronation Street 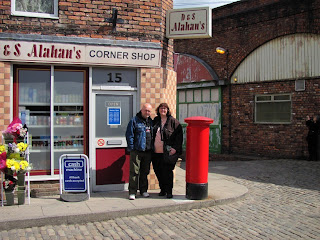 Everyone's talking about it, everyone's writing about it. You can't open a newspaper website originating in the UK for seeing an interview or an article, and even over here in Canada, newspapers and television feature short pieces about Coronation Street.

I've been watching Coronation Street since 1989 when I started watching the Sunday morning omnibus with my breakfast and I got hooked pretty quickly. I was aware of Corrie before that, and even saw an episode now and then but it was on in the daytime at 3 pm for years here so I was either at school or working. This was pre-vcr days. If it had been on in the evening, I have no doubt I would have watched it. Like everyone else, I love it because the characters are so real to life, and everyone knows people like Ken, Ena, Hilda, David, Gail, Steve, Mike and all the rest. I like that they aren't glossy, perfect looking people. I like that most of them wear the same clothes more than once! I like that Corrie shows everyday conversations and little scenes that add nothing to the plot but are part of everyday life. 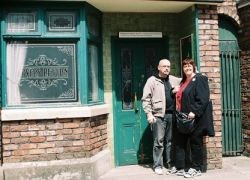 Once I got online, in the mid 90s, like most fans, I did searches for Coronation Street. I found a usenet "newsgroup" and a mailing list and met our Flaming Nora through those along with a few other lovely people. I found the chat room which was busy most of the time (sadly is sparsely populated these days as everyone has migrated to social networking sites). In the chat rooms, I met more lovely people, many of which are still very good friends. I also met someone very special and we're now engaged, though at the moment, he lives in Salford, the real life Weatherfield!

I've been lucky enough to visit the Granada studios three times in the last 10 years, including one visit where I was even luckier to get a tour of the inside sets, not just the outdoors Street set. There are photos here, a fraction of how many I've actually got but the ones that I like the best!

I've been fortunate to have met some of the actors that bring the Corrie magic to the screen. Many of them have been here where I live, Halifax, Nova Scotia. Here's a link to my Corrie website with links to each event where I've met one of the actors. I have a number of Corrie books, many written by Daran Little and have read a few of the biographies and autobiographies. I have lots of dvds of selected episodes from the 60s, 70s, and 80s. I download the UK episodes and write an episode summary every week as part of a team that does this for a mailing list. I've been a past member of and always supporter of the Downeast Streeters here in Halifax. I maintain and/or contribute to a few websites such as Corrie.net and especially The Coronation Street Blog. I even wrote about Corrie for a commercial blog for a little while a few years back and got paid for it!

Tonight, on CBC in Canada, you'll see me and my fiance in Corrie Crazy, a documentary about Canadian Corrie fans. I'm excited to see it yet a bit nervous too. There are a few more of my Corrie friends that are in it as well and they'll be showing fans from coast to coast, talking about why they love the show.

There are times that Coronation Street has storylines that I don't enjoy, that seem to drag on forever and that seem very out of place. But equally, and more often than not, Coronation Street keeps me captivated, makes me laugh and cry, cheer and gasp. I love to talk about the show. I love to speculate what's going to happen. I love to write about it and share my enthusiasm with like-minded people.

Coronation Street is a big part of my life but I do have other interests and I don't think I'm a completely obsessed fangirl unable to separate television from reality. But on weeks like this one, where the show has gone into overdrive to celebrate a huge, record breaking milestone, it's foremost in my thoughts and i can't wait for the next episode to be ready to download. I would watch it on ITV's iplayer if I could but that's not an option if you don't live in the UK. This is the next best thing because I can't wait 10 months to see it on CBC though I'll watch it all over again when we get to it in our timeline. And anyway, downloading means i can save my favourite episodes to watch again!


I'm sure that Coronation Street will end at some point in the future, but I hope it has a good many years of life left in it. With the top team of writers and actors it attracts, it's got a pretty good chance at a continuing long life and this fan will be there every step of the way!
Posted by Tvor at 08:45