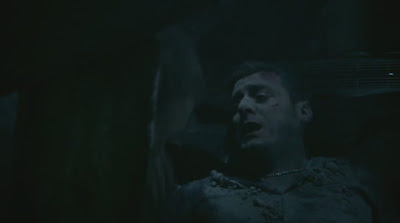 I'm still catching my breath after that crash last night and i had Corrie dreams, i did! Tonight,  we pick up immediately from where we left off, fire raging, smoke pouring out of windows, rubble everywhere, people hollering and screaming, hand wringing and pulling people out of the rubble.

I had some thoughts on Peter's fate before tonight's show aired.

I thought he could be a candidate for the off but then... First, I don't think they'll make Simon an orphan. Second, Carla thinks she loves Peter. How many of her men are going to die violently? Somehow I can't see them doing that to her yet again. Paul, Liam, Tony... so probably not Peter.

I'm guessing it's going to be a near thing with a "deathbed" wedding in hospital. That would be the ultimate Barlow moment for the 50th live episode, wouldn't it? All the Barlows around a "dying" Peter marrying Leanne in the hospital. It could be that a crisis like this is enough to make Leanne realize it really is Peter she loves or, she's thinking Peter is on his deathbed and how can she not marry him when he's begging her to give him a reason to live? Cue more angst and longing looks between Leanne and Nick over the Rovers' bar. Will she end up pregnant and wonder who's the daddy? I know it's been done and we've just gone through that with Tyrone and Molly so please God not again.

Ok, so the above was written as i thought about the week opener, while waiting for Tuesday's show. On with random thoughts and impressions from Day 2:

Poor Fiz, not only is she going into early labour and is it any wonder? Carla was a rock, probably to keep her mind off worrying about Peter. John is beside her and beside himself and seems to have forgot about the body in his house. I hope Chesney doesn't run in to see if everyone's ok and discover Charlotte on the floor!

Did you notice last night when the explosion happened, the effect that they shot around John's face had the room i.e. his world, shrink away from him, as if he went into another dimension or something? I liked that. 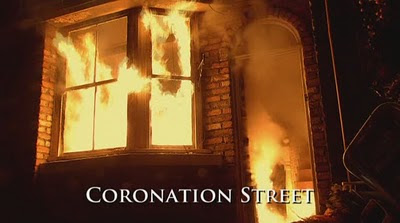 I really had Ashley pegged to be a goner but there he is with Nick helping to get Peter out except they're still trapped in there! Claire and the little boys are ok too. Well i always did hope they'd go off to France in a happy ending and it looks like all four Peacocks are ok but Ashley's not out of that rubble yet.  If Ashley's not one of the dead, then i guess my next guess is going to be Sunita, leaving Dev to be Gary Mallett the second, tragically widowed with twins. It doesn't look good for her from what i can see. If that's what happens, i'll be very sad to see her go.

So glad Graeme survived! I am going to make a guess that he'll be one of the ones that rescues Rita.

Gary's flashing back really bad!! Did we see Emily and Norris on screen? Probably at the back of the crowds.

It's been so strange not seeing Liz around and now she's apparently hopped a plane to see Andy. I hope the actress is not having more health problems and is only on her honeymoon as she did just get married.

Why are they trying to get into the shop from the front when Becky just walked right in the back? It didn't look that blocked in through to the other part of the shop where Molly has passed out and the doll baby is crying.

A lot of real heros, diving in to rescue people... Ciaran, Lloyd, Jason, Tyrone, Kevin, Eddie, and even David Platt, not that Gail was too happy about it but you need any able bodied person to help out.

Last but not least, it doesn't look good for Jason and Simon!! Gail and Eileen really could identify with each other for once and are going through much the same thing at the moment. The fire department has arrived, though, just at the end and i'm hoping they manage to help get them out of Number 13.


A few lines of the night:
Sean "When you're done that, start dishing out the brandies and make'em large ones"
Nick "That's the last time i have a stag do in here!"
Posted by Tvor at 18:54

I'm seriously worried for Jason and Simon as well. I really don't want to see the Peter/Leanne wedding going ahead, deathbed or otherwise, as I feel she's done the dirty on him so badly I don't think she deserves to get any satisfaction from taking the moral high ground or whatever. Really hope Peter doesn't die.
As someone who didn't want a bloodbath, I was surprised how much I really enjoyed the tram crash episode, and obviously there has to be an aftermath, but last night I was beginning to feel - is this really just a bit TOO gruesome? hmm...will hang in there.

Well, if it's a dying man's wish, she won't get a lot of satisfaction out of it. I don't think the next few days are going to be overly uplifting though so maybe the wedding is a way of giving people a little hope for the future. You can't be relentless in the tragedy on a soap.

I'm sure one of the pictures showed a hearse with 'Daddy' in flowers.I really do hope it's not Peter. Simon has already lost one parent.

Exactly... well i reckon it has to be either Peter or Ashley though at the moment, it looks more like Peter but they aren't out of the rubble yet, as i said, and that viaduct could still completely collapse on them.

Maybe the dying man with a last wish is Nick?

It's got to be one of the three, I think. I really think Jason will get out ok now the fire department has arrived.

Great blog, Tvor. I, too, am seriously concerned about Peter being 'number 4'. But I think the script writers have been really clever, this week has all been 'top secret' and then you think you know all about it really with all the spoilers and little leaks and then WHAM! something completely unexpected happens and pulls the rug from under your feet and you realise you didn't have an clue about any of it!
But if little Simon gets out of this I think he'll need some serious counselling - first Peter almost burns the flat down, now he's trapped in a blazing inferno. And not even at secondary school!

Thanks!
Yes i think poor Simon is going to have a lot of fear of fire after this! The only thing we really have to go with is which actors are leaving the show. You can figure at least one or two of them are going to die but they will also pull a rabbit out of a hat and surprise us because some of the ones we know are leaving are already safe (i.e. Janice, Liz). Charlotte is very likely one, Molly is likely one, either Peter, Nick or Ashley but only one of them i think, so the fourth might be Sunita, Max, Jason, Simon, or Rita.