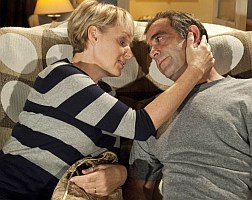 Last week, Sally called Kevin "devious". She's right of course. He always was. He was always able to use passive aggression to work his wiles on Sally and it looks like he's tried it again. Did you notice that look of triumph when she said he could stay one last night? How he preyed on her emotions and they ended up in a clinch? Kevin always thinks sex solves everything. And if it doesn't, a healthy serving of guilt just might do the trick.

Even when Sally had found out about the affair and the baby when Molly died, Kevin sunk his teeth in and tried everything he could to keep Sally from throwing him out and he used the first opportunity that came along, his injury, to get his feet back under the table. Surely, she'd realize what she was missing and they'd get back together? Surely?

He keeps saying "I made a mistake" Well... yes he did but it was a very big one and yes, both of them are guilty of affairs in the past and have overlooked and/or forgiven the other for it but this one seems different, deeper. Sally knows Kevin would have left if he hadn't found out she was ill. That's probably the part that cuts the deepest. I never felt Kevin was truly in love with Molly and finding out about Sally's illness thumped him back to earth brutally but it was too little too late.

It's the thing that bugs me most about soaps, the never ending back and forth between a couple that's "meant to be". Horse hockey! When couples have gone through what they have in real life, there would be no going back. The writers say the fans want the couples to stay together so they put them back together and then break them up again because happy couples are boring to watch on television. So instead, we have endless circles of the Websters. Ken and Deirdre are another couple like that. It's almost as if they don't know what else to do with the characters on their own. If one actor isn't leaving the show, the writers will inevitably put these "star crossed" couples through their paces endlessly.

With that in mind, not because she should take him back, but because the writers will make it happen, Sally will probably take Kevin back in the end and raise Jack with him. More fool her. And him, probably.

Read a character study of Sally,  Kevin and a blog post about the loves of Sally and Kevin, Part 1 and Part 2.
Posted by Tvor at 15:23

Horse hockey is right!! Yikes... between Tracy and Kevin I'm starting to lose any little teeny tiny bit of patience I can muster for them. It's almost getting more frustrating than I can stand.

If they do end up together again, I won't be surprised because it has been obvious for months that the writers have no idea what to do with Kevin on his own - his separation from Sally and alianation from Tyrone have isolated him. He needs to be reintegrated with the rest of the cast in order to remain viable as a character, and throwing him back together with Sally is the easiest and laziest way of achieving that.

I'll be disappointed if it really does happen, though, because it is such a lazy and implausible solution to the problem. Sally worked well as a single woman - she has connections with plenty of other characters, so was never short of people to interact with. Finding new ways of reintegrating Kevin with the rest of the cast might have been harder, creatively, but surely would have paid off handsomely in the long run - they could have moved him and Jack into one of the vacant flats on the street, could have allowed Kevin to forge new relationships and friendships. Plus, how can Sally possibly be expected to raise Jack - surely she would always feel some resentment toward the child that he would pick up on, no matter how fairly she tried to treat him.

Splitting up Kevin and Sally was a bold move but one that revitalised their whole family. If they simply end up back together again, the whole exercise will have been an enormous waste of time.

I agree, LindaSonia, it's frustrating! Llewlla i completely agree with you. Same syndrome with Ken and Deirdre. It's lazy and they do it under the guise of "it's what the fans want". This fan also doesn't want it!

This fan does want it - why don't you watch Emmerdale or |Hollyoaks, because you don't seem to like this soap very much at all?

There are lots of Sally and Kevin fans out there, fair enough. I think they've run their course and neither of them seem to be able to stay faithful. I don't like Emmerdale and we don't get Hollyoaks in Canada.