I can just see the writers in the back room of a pub somewhere in deep Salford, a bottle of the hard stuff on the table, a laptop open, and pissing themselves laughing at all the twists, turns and bizarre little details they've come up with while writing the saga of Stape. This was their final shot, the worm at the bottom of the bottle of tequila.

For those that don't know, there were two classic movies (based on a book) about a much beloved teacher called Mr. Chips, the name John used to book the flat viewing. The most famous of the two was called Goodbye Mr. Chips. Brilliant!

We've seen the end of John Stape. For real this time. I always knew he'd be back after that swan dive off the hospital roof, but I actually thought he'd do the right thing and turn himself in. Or, if he was that concerned about going back to prison, (or the psychiatric ward) why didn't he write a letter? He certainly spent enough time documenting all the timelines on charts! But noooo. John had to commit one last crime and kidnap Rosie, who of course would go along with any scheme he would dream up. Wouldn't you?

Ludicrous of course. And contrived. But oh, so appropriate for the ending of a story with more twists than the F1 track in Monaco. "Pour another round, lads, what else can we dream up to do with John Stape?"

I have to say it irked me to no end seeing John hiding behind a tree when Fiz arrived at the courthouse. I called him more names than can be uttered in polite society. He skulked and lurked and you could see the madness in his eyes but that's not why he couldn't persuade himself to do the right thing because when has he ever? 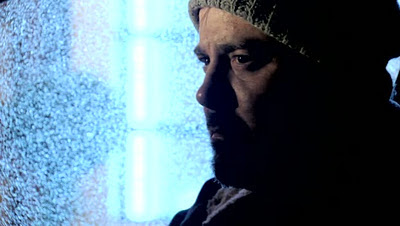 Everything he's ever done was self serving. I won't go into the history because I've done that many times. You can tell he'd gone completely bonkers.  After all, he'd been hiding out in Anglesey. Case proven, M'Lud! Actually, I jest. It's quite pretty there and in fact, the actor himself spent some time there over the summer so sightings of John Stape near the battlements of Beaumaris Castle could be true!

With his deathbed confession (to the lovely DC Redfearn, no less!)  leaving things up in the air while the solicitors and police mull things over, are we to be biting our nails worrying whether there will be a miscarraige of justice? Oh, of course not! It's a soap. Fiz is innocent and justice will prove her so. Besides, even though John is dead, I refer you back to the aforementioned charts and lists and the quizzes he was making Rosie write up in the flat. Surely that backs it all up so it's not just Fiz's word even if Rosie's word is considered hearsay?

Maybe now that John is gone,  Fiz can find some sort of life for herself. I'm sure it will be a long time before she can trust anyone. Chesney and Katy have been living at her house, maybe they should all bunk in together with both babies and be one big happy family for awhile. It will keep her mind off things.

I've enjoyed the Stape saga, though I know some have not. I loved the farce, the black comedy, the ludicrous twists and turns and I've enjoyed hating John Stapewick. Kudos, Graeme Hawley, you were brilliant!
Posted by Tvor at 20:47

True enough! I thought it was Lovely, myself. We were there in May though only saw a small part of it.

Great post Tvor. Although I hated what the Stape saga did to the formerly feisty Fiz, it did make me laugh. Sad to think, that on the Street, the death of Schmeichel will be lamented more than Stape's will be. What a pathetic legacy for this weak-willed man.

Totally agree that Fiz is a shadow of her former feisty self and i did hate that part of it all.