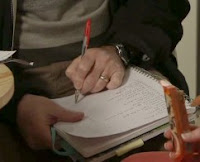 The buried fact of Jason and Tina owning the flat over the Kabin has finally reared it's ugly head but only so that John Stape would have a place to tie up Rosie and try to persuade her to testify to his crimes so Fiz will get off. Yeah, right. It was contrived of course but then you could make the argument that a lot of the Stapewich Chronicles was. Now, after yet another kidnapping,  Rosie can be smug and bray that she told them all so, yet again. Because it's all about Rosie, right?

It was kind of funny watching John and his flow charts and diagrams and explanations, trying to teach Rosie all the facts surrounding all the murders and crimes. Yet again, though, John continued to blame Rosie for it all, didn't he? She was to blame for his downfall. It wasn't my fault, M'Lud! Why didn't John just write a letter and send it to the judge or something? That would be too easy. 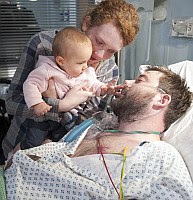 Except now it's all over but the legalities. It's so frustrating watching a trial when the testimonies all get twisted and turned around on the testifiers. You can see the case building up and you can see all the people that mean well have what they say turned into a death sentence when we all know Fiz is innocent. Innocents don't usually get sent down but Fiz was convicted on circumstantial evidence on the same day John's car crashed, persued by enraged Kevin Webster (but then, when isn't he enraged?). He manage to gasp out his confession to Fiz and hold his baby before he died and the lawyers are going to have to hash it all out but you know Fiz will walk free. There's too much reasonable doubt.

Fiz blamed herself. And in a way, she's right. She got sucked in by Stape and he manipulated her emotions. If she hadn't taken him back, she wouldn't be in this position.

Kevin thought he was in there with Sally after spending one night with her. He made up with Pam and let her take Jack for the night so he and Sally could talk. Of course he thought she was going to take him back and he got a shock. He thinks it's only because he told Sophie and jumped to conclusions but of course he is again not accepting responsibility and he's using guilt, bringing the girls into it as well. I do get the feeling Sally's conflicted but in my opinion, I really think she needs to be apart from Kevin. I'm not altogether sure Jeff is the right one but he might be ok for an unserious relationship. A bridge, so to speak. Now Kevin's back to glaring at Sally from the garage or across the Rovers. I don't want them to get back together but in true soap fashion, that could still happen after the long game.

It seems Tracy is having twins and Steve, probably out of excitement, thinks it's a good idea that he and Tracy give it a try together. He just doesn't want her to have an abortion or run off with Amy. And she's being all mature and reasonable, making out she's a changed woman. Now we all know that's bollox and she's a nightmare, evidenced by her throwing Becky's infertility in her face. Poor Becks, I do feel sorry for her. She may have been somewhat the author of her own misfortune, with her jealousy and stealing the money to pay Kylie off after the crash but it takes two and Steve isn't completely blameless in their breakup either.

Where *is* Kylie anyway? And David? They've dropped off the face of the earth and back into the forgotten storyline cupboard after one visit with Max awhile back. Presumably, she's still visiting the lad. Is David as well? He should be so he's not a stranger for Max. Inevitably, Kylie will probably get Max back. I predict a Christmas joyous return. 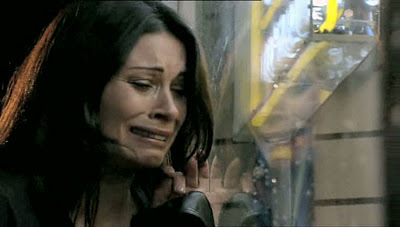 Carla hit rock bottom, and is dragging herself back up. It's hard for her to keep relying on people, she's not used to that. Now she has to battle Frank in a he-said she-said rape charge and she's got to battle his mother in the factory and Frank is doing everything he can to get his revenge to ruin her. I don't think Carla is going to give in though, she's risen from the ashes before and she'll do it this time. Frank raped her and he will pay for it. Setting up on his own, nicking her laid off workers, taking business away. Will Frank be able to ruin Carla altogether? Of course not. She'll fight him tooth and nail and she'll come out on top in the end, I'm sure of it.

In the meantime, Peter keeps sniffing around her and to me, that's really sending mixed signals. How on earth is Carla supposed to move on if he keeps hugging her and caring for her? Under normal circumstances, if they'd only ever been just friends without either of them having feelings for the other, it wouldn't be a problem but her feelings are well known and he shouldn't be encouraging it, not just for her own sake either but for the sake of his wife! I can't blame Leanne for going off on him. Her jealousy isn't unreasonable this time around. He's got form. 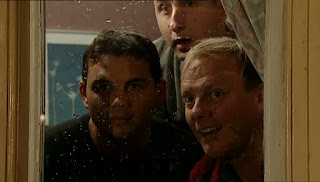 Why did Eileen have to get involved with yet another loser? It's too bad because I did like Paul but chronic losers in love are never going to be happy. The storyline has a twist, though. His wife his Alzheimer's. So it's ok to carry on with someone who's wife keeps forgetting all about her husband anyway? That's pretty low, isn't it? I mean, I can see how hard it must be for him and how lonely he feels with his wife physically there but not. Still, though, he should have been up front about it. It's a tough spot to be in and purists would say he's married and that's an end of it. But sympathetically, and emotionally, that is one man that badly needs a mate. Eileen's right, though, they'd end up in bed. And because this is a soap, she'll justify it through her sympathy for his plight and that's exactly what will happen.

And in case you've been away, or hiding in that storyline cupboard, you already know we've lost Betty Driver at the age of 91. She will be missed very much. Betty could steal a scene with a raise of an eyebrow and a reshuffling of her blouse over those matronly bosoms and light up the bar with a laugh. Her character's death will be written into the show and we'll have a proper sendoff for her on screen. I shall start stockpiling hankies now, I think I'll need them.

So all that hullabaloo about bringing Pam and Bill back on the show to what... shove them back in the cupboard again after Bill has a heart attack? What the heck was that about? Was that putting the spin on the bad publicity because they were unceremoniously let go? TPTB (The Powers That Be) didn't want to seem like they were being callous so they tossed the fans a bone? Will Bill and Pam be back? I'm guessing probably not or only briefly if we are to see a wedding. They'll have the ceremony and fade away yet again. Why bother? Well I know why. It was contrived so that Sally could give Kevin a pity shag giving Kevin a reason to leap to all sorts of conclusions.

Sally, luv, cut out the dead wood. Kevin is dragging you down. I think these two are going to be the Ken and Deirdre of the future. Don't know what to do with them? Get them back together or split them up. Surely there's more to them than that? Maybe they should have put Sally together with Paul the fireman, dealing with his tough marital situation. Or maybe Anna could have developed sympathetic feelings for Kevin instead of Owen? What would you do with these characters if you wouldn't put them back together?
Posted by Tvor at 10:10