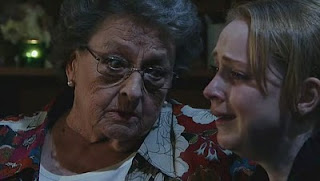 Another of Corrie's legends has passed away. Betty Driver died on Saturday morning and the Rovers Return will never be the same. I know I'm a bit late jumping onto the blog wagon with this but I still wanted to mark her death on this blog. I've been reading everyone else's and didn't get round to it, I guess.

I've been watching Corrie since 1989 and of course, Betty has always been there. She harumphed, she criticized, she scolded,  she joked and had a laugh. She was always a comfort and had a wise word for those who needed it and always took pride in her hotpots. I wonder if anyone has ever counted over the years how many times Betty has quit the bar in a huff, waiting until someone inevitably came on bended knee to beg her to return? Quite a few in my short memory, mainly via Alec Gilroy and the Duckworths but a few others have been on the receiving end as well.

She did not suffer fools and she told it like it was. Yet she was kindness itself. One of my favourite Betty moments was her cuddling poor devastated Claire Peacock after Ashley's death. Another of my favourites was when Betty dressed up as the Fairy Godmother for the panto the other year.

The tributes from castmembers current and past are pouring in and rightly so. She's worked on the show longer than most and has surpassed prior legends such as Pat Phoenix and Julie Goodyear and Jean Alexander. 42  years is nothing to sniff at! Rest in Peace, Betty love.
Posted by Tvor at 06:53