Stella, we hardly know you! 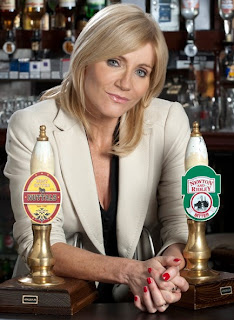 Like Flaming Nora over at Coronation Street Blog, I've been willing to give new Rovers licensee Stella a chance. I've not got prior "history" with Michelle Collins since EE was never a regular show for me and I can barely remember her on it as Cindy Beale. (It's only been shown in Canada sporadically over the years).

At first, I found her a bit stiff and awkward. I didn't find her put-on accent that bad though again, it felt a bit stiff but I thought she'd relax into it as she got more experience and I do think that's happened a little. I can't say I'm overwhelmed by her acting skills and her obviously unwrinkled and frozen features hamper her emotional scenes. (yes, I know that's a bit catty but it's sad that female actors feel the pressure to have plastic surgery or freeze their features with Botox in order to look younger)

But have I grown to like Stella Price? I can't really say. She's not really been on the screen all that much since all the fanfare of her arrival back in early summer.

Stella had a few weeks of storyline where Leanne discovered that Stella was her mother. Angst, tears, anger, longing looks. Then Stella and her fella Karl went on holiday. Gee, how many jobs do you get where you can take off weeks after you start?

Stella came back and there was a bit more angst between she and Leanne and then she got knocked over by a drunken Carla. She lie in hospital a week, woke up, sat on the sidelines of the pub or lounged in the back room where we hardly saw her. Things seem to be better between she and Leanne but, Oh Wait! She and Karl are off on holiday again so she can recover. She's been employed as bar manager for about 4 months and between hospital and holidays, she's actually done her job for about half that time.

So what was the point of her big arrival? But how can we warm up to her if we aren't given the chance? You can hardly make fans and influence people if you're never there. Is Ms. Collins finding this acting gig more difficult than she expected? The Powers That Be were fully supportive of her when the media and fans showered criticism on her for her acting and accent but how are they feeling about her performance now? 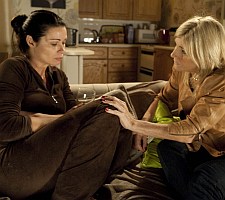 Stella needs more storyline than reciting her past history and being a stereotypical advise-giving Landlady. She is the Landlady of the Rovers Return, the heart of the show. She needs to be front and centre and involved in storylines, not just on the peripheral. She needs to make friends. Stella has made a connection with Carla, maybe the two of them can be mates. Carla certainly needs one and Stella really hasn't made any close friends yet.  She needs to let her hair down with a bottle of wine and a few of the other ladies on the Street. I think Gail could use a gal pal. She's got Sally but you never see them hanging out much anymore. Maybe Stella could give Gail a few hints on how to handle a stroppy daughter/daughter-in-law!

I do like Karl, he really seems like a natural and he's obviously devoted to Stella but we need to know a bit more about him, too. Stroppy daughter Eva is just annoying at the moment though I did like her new friendship with Kylie. They seem suited as mates. Let's see them hang out more.
Posted by Tvor at 09:53

Agreed that the PTB really need to start giving this family more connections - or, rather, not so much giving them connections as making better use of the connections they already have or have made. I think they are suffering from the intense plot-focus of the show at the moment. None of the characters are getting much if anything in the way of character time, which new characters in particular need if they ever hope to bed in properly. We need more scenes of folk just hanging out, being friends/family. Everything doesn't have to be so life or death dramatic all the time!