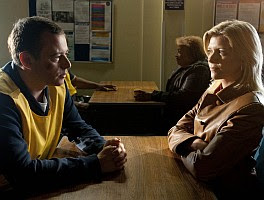 More drama for Leanne and Stella. This might be the turning point, the accident. Leanne even turned to Stella after a row with Peter over Carla. Leanne and Stella and Eva will be one big happy family soon I suppose. Well, maybe not Eva and Leanne. I think that's going to be a rockier road.

Meanwhile, Frank and Carla's relationship blew out of the water. Frank can hold it over Carla that he took the blame for her dring driving and that relationship went from bad to worse, ending in the rape. Nobody likes to see that sort of storyline. It was tough watching when it was Toyah and it's tough watching now. Because she can't have Peter, Carla took on Frank and then dumped him almost minutes before their wedding. Well, with anyone else, that would have been the smart choice. Back out before it's too late. But control freak Frank didn't take it very well truly believing she was having an affair with Peter and Carla got the worst of it. What is it with her and controlling blokes?

A bit more about this over on this blog post. The more i watch of this, the more i'm very impressed with all the performances and how it was written. Will Peter and Leanne fall apart over his defence of Carla? It looks like it at this point and I can see how she'd be suspicious. You need to trust your husband but he's sure putting out a lot of wrong signals and she knows how Carla feels about him. Frank hissing poison in her ear, too, is adding to the problem. What could really break them up is Peter getting pissed that Leanne won't trust him. Frank is pathological, isn't he? That could be his undoing. 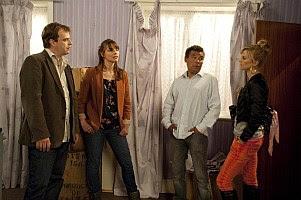 Of course it's another round of Becky, Steve and Tracy. I don't know if i can stand it! Tracy gloating. Becky glaring. Steve looking gormless. How can he stay upright without a spine? I suppose he's got lots of practice. As much as i like Katherine Kelly, this storyline is getting dull. We know she's leaving so wouldn't it have been better to cut and run now rather than drag it out? They'll probably put Steve and Tracy together which is absolutely awful but what else could they do? There's nobody left to put him with and there are children involved. She's not going to soften, not really, she's only pretending so she can get her claws into him. He's going to be saddled with yet another loose cannon woman and will wonder why it all went so spectactularly wrong. Let's just hope he's not wondering it after that blunt instrument comes out of the closet. 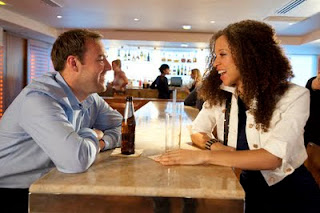 I like Kirsty and i think she's probably quite good for Tyrone but she has an awful lot of hair! Would a police officer really have that much hair? And why did they have to hire a Cheryl clone? Though I have to say, I like Kirsty. She's feisty and strong and probably very good for Tyrone. Will it last? Who knows. It's Tyrone's first foray out of the gate since Molly.

Meanwhile, Tina and Kirsty are at loggerheads over car parking mishaps and Tina's being a real cow, as per usual. I used to like her but she's getting up my nose now. She's not very pleasant most of the time. I do think Kirsty wouldn't block someone in even if she thought it was Tina's car. She's a police officer after all so it made no sense that she wouldn't have noticed Rita's car there. All these accusations Tina keeps making, I hope Kirsty arrests her for slander! That would teach the opinionated little madam. And if Tyrone is going to be Kirsty's boyfriend, Tina isn't going to have a home very much longer if she keeps this up. 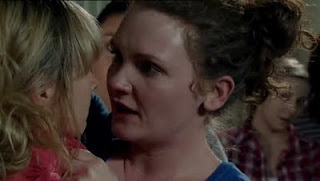 Two storylines started the month, then dropped suddently out of sight.

Once the Keystone Cops kidnapped the drug dealer and Norris managed to get him jailed, Fiz was free to release her inner Cilla and I guess isn't having any more bother since she's not been mentioned or seen. I am looking forward to having this all over with and Fiz coming home. She's innocent and will be set free at some point. I'm not going to spoil how it comes out if you don't already know but it will finally be time for Fiz to look to a new future with her baby.

One visit with Max and we've not seen barely hide nor fingernails of David and Kylie aside from the brief mobile nail pimping in the pub once, I think. You didn't really think David and Kylie would move out, did you? Not when the welfare of wee Maxie was at stake and after all, Gail would brick them in the house rather that let another one of her precious little boys leave the nest! I don't know why the Social Worker was worried about all that change for Max. Coming back to his mother and another new home etc, what's the difference which new home it is? Gail's or a new flat? I'm sure we'll get back to this, in fact, I'm predicting that will be one of the Christmas Storylines, Max coming "home" to his mum.
Posted by Tvor at 06:53