The double wedding? Well I've already gone over that. No point in rehashing it. I'm going to thoroughly enjoy Kylie winding up Gail, though!

Then there's a lot of angst and handwringing that Maria's doing about Frank. 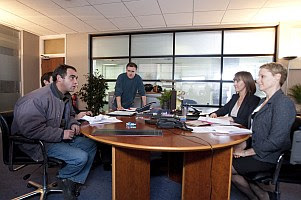 The War of the Websters continues with the recent windfall of Kevin's thanks to a lottery scratch ticket. He has been scurrying to win back Sally's favour and not doing well at all. Flowers. A car that she sold back for cash. But she still insists on half of the money he won. Well, he gave it all to her and she gave half back but I hope she took the cost of the car and the money she got for it in mind when she wrote that cheque. It didn't make Kevin very happy, though, it loosens his hold over her. I think it really is over between them and rightly so. Just too much water under the bridge. 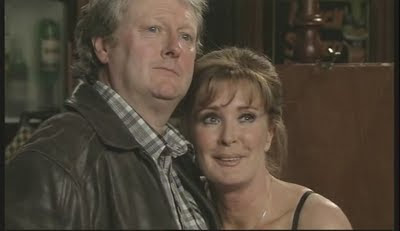 Nobody really thought that Steve and Becky would end up leaving because we already knew Liz was going. It's too bad they had to have Jim try armed robbery to try to get the money to buy the pub. It was probably the worst thought out plan he could have devised. No mask, for one thing. Even if he'd managed to get out of the bank, there would have been CCTV footage of his face. All for the love of Liz, really, and now he's well and truly lost her because he's going to be behind bars for the rest of his life and though she said she'd be waiting for him, she's high-tailed it to Spain. She may come back for the trial and she seems to have given him some hope in a letter but really, I think they both know down deep it ain't gonna happen. Goodbye Liz! Off in a traditional black cab.

Steve really needs to get a solicitor and get access to Amy down in writing, especially now that Tracy has all that ammunition against him, not that Tracy would pay any mind to legal papers, I suppose. Tracy threatens to take Amy away and she could but down deep she still hopes that she'll get Steve back in her bed. He's such a lily livered weakling that he could succumb to temptation as far as sex goes but I'd be very disappointed if he ever got together with her properly, citing a long time "I just can't fight it anymore" feeling. For one thing, it was never like that, it was only ever about sex between them and for another, what makes her any different from Karen and Becky, really? Another "mad, bad and dangerous to know" woman, obviously the type he likes. Somehow I doubt even a solicitor is going to be much help now. He's mired in debt, made some impulsive choices. How is he going to get out from under? We hear he's hiring a new manager but he still has to be able to pay her.


The Yummy Mummy competition seemed to be a non-starter. Cheryl and Leanne at odds over their boys. As far as the school play goes, I would think Simon would be far better at getting into character than the morose and silent Russ. I don't know why some people are thinking this is a terrible storyline. Many of those are the same ones that moan because Corrie is one sensational ratings grabber after another. This type of storyline is the kind we always used to see on Corrie. No murders, no hostages, two women in an argy bargy over their kids. I don't think we'll see them rolling about on the cobbles but I for one am just itching to see Leanne grab a hunk of smug Cheryl's hair and give it a good yank! However, after all that, it seemed to fizzle out unless we're going to get more when the play actually happens. 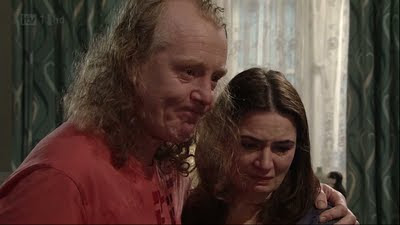 Eddie seemed keen enough on adopting and then when Faye finally came to stay, he seemed like he was tired of the whole thing already. I suppose he was just going through it for Anna's sake and never thought it would actually happen but he seemed like he liked the little girl until she caused a bit of trouble stealing. Now he feels overwhelmed with it all. You'd think he would be used to that sort of behaviour. I'm quite sure Gary was not an easy child to raise, and he certainly got into trouble. So in the end, Eddie and Anna just had too many differences though they still love each other, I'm sure. It was so sad seeing them part and again, a few episodes later when she put the last of Eddie's cakes in the bin, closing the lid on their life together.

When you're dropped into a trouble child's life, it's not going to be easy and I think Eddie didn't really realize what it was going to be like. He now does in spades and is probably thinking he's too old to go through parenting a difficult child again.

Unfortunately, he's off to Germany, leaving Anna to hold the baby, so to speak. Will Social services let her keep Faye now that Eddie has gone, though? And if they take her, I'm hard pressed to see how Anna fits in to the community on her own, with Gary all grown. She'll have lost Eddie because of Faye and lost Faye anyway. She might as well go to Germany after all if that happens. I really like her though, and I hope they find reasons to keep her. They'll probably throw her at the first single bloke that happens by, probably Owen. Then she'd have Katy to fuss over. Good bye Eddie. I think it's a huge mistake to let Steve Huison go.

Roy's mum, Sylvia has arrived and I love, love, love her already! She's just the thing to put the cat among the pigeons. I hope we get to see her reaction when she finds out that Hayley used to be a fella. She's not a replacment for Blanche but I do think the show needs a cantankerous old biddy like her to keep people on their toes in the tradition of Blanche and Ena Sharples. 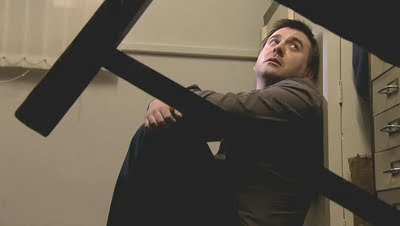 John is in a very bad way. It's the beginning of the end, we all know that from the spoilers and because it's Soap Law. The truth about Colin under the factory floor *has* to come out. John spent quite some time in hospital and he certainly didn't take things easy when he got out, dumping his pills in the bin as soon as he was away from the doctors and nurses' watchful eyes. It's that selfishness again. He knows what's best. Except he doesn't and he flipped out again when he found out about the money from Joy's estate. Poor Fiz is at the end of her rope and Chesney is upset, too, for her and there's nothing he can do, especially now he and Katy are pregnant. Doesn't that just make you shudder? 16, on their own, not making ends meet and now a baby? She'll be quitting school and living off the Social in no time if this keeps up. And Owen will be inside for murder because he will do one on Chesney! It'll peak in May and we'll see it all come out.

Easter in London... I liked it! But then I love London and it's very neat to see all the places I've been. I did wonder about Violet and Jamie though. Awhile back when Sean was first back in touch with her and got to see the little one, he said she and Jamie had broken up. I guess they got back together and it's obviously not been a smooth road. Sooooo nice to see Marcus again, too. He was a lovely character and he and Sean really worked as a couple. Toddley and Jools weren't all that much to write home about, I was hoping Jason would hit Todd just a little harder but he did manage to knock some sense into him verbally. That part of the Easter Sunday show all seemed kind of flat, really. 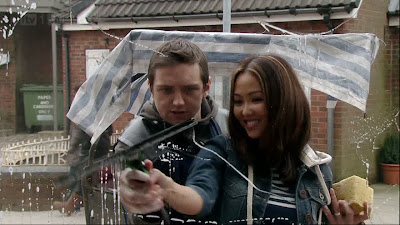 We've ended April with an immigration inspection to check whether Graeme and Xin are really married or not. They reckon someone told on them and that's what happened but even so, you would think there might have to be an interview anyway. Maybe not but leave it to Mary to stick her beak in. Tina and Graeme are falling apart, with suspicions telling them what they already know down deep. There's no going back. It's clear Xin is falling for Graeme and if he's continuing to have arguments with Tina, it's inevitable he'll fall for Xin too. She didn't get a job that she'd interviewed for but, with the near departure of Craig Gazey, I recon she'll get one that will take them somewhere else, London perhaps, or Wales. I can picture Graeme in Wales, can't you? It'll facilitate them moving away together and he'll have discovered he's got feelings for her after all, which most of us already suspect.
Posted by Tvor at 17:18