We are being treated with another nod to the great history of this great show that we all love. Another character from the distant past is returning, played by the same actor and it's a wonderful thing! Everyone knows the name of Elsie Tanner and everyone remembers or remembers hearing about her wild child, Dennis.

Dennis Tanner, when we met him in episode one, was only a few weeks out of Borstal, a juvenile prison. He was a young man that had got into trouble. He wore his hair a little long, liked a leather jacket and had a slight air of danger about him but he was a pussycat really. He had big dreams and not always the means to make them happen successfully. He was the often the bane of his mother's life but everyone seemed to like the scallywag anyway.

There was always a rivalry between Dennis and neighbour Ken Barlow. The boys would have grown up together though Dennis was a couple of years younger, more the age of David Barlow. Ken was studious and smart, and he went to university. No doubt Dennis felt that his mother compared him unfavourably to Kenneth and Dennis did seem to have a chip on his shoulder about it all. I think Ken pretty much ignored Dennis as much as possible and did seem to look down on him. But then, Ken looked down on pretty much everyone in his working class world, somewhere he never thought he really belonged but couldn't quite seem to leave.

Emily Bishop knew Dennis. She was older than him by 13 years and an "old maid" or spinster. Women were supposed to be married and raising a family by the time they were Emily's age but Emily was not fortunate enough to find that life for herself. These days, most young women are discouraged from marrying too young and encouraged to establish some sort of career for themselves first. Indeed, women can decide not to marry and are not thought to be strange. But those were different times.

Although Emily seemed to have a crush on Leonard Swindly and even proposed to him in the leap year of 1964, she realized neither of them truly loved each other and backed out. She seemed to regard Dennis as a naughty schoolboy but I also think she might have harboured a little crush on the "mad, bad, and dangerous to know" Dennis, the type of feeling where you look at a younger man, sigh and wish you were 10 years younger that maybe, just maybe, they might notice you. 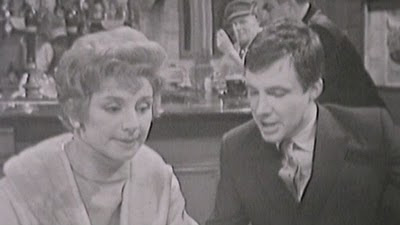 Dennis knew Rita Littlewood, too. She was a club singer and exotic dancer and he was into managing entertainers though wasn't her manager. She, too, was about 10 years older than him but in her initial appearance, seen above from 1964, was said to be just a friend. She returned in 1972 as a regular character, several years after Dennis left in 1968. We never really knew how well she knew him but they were comfortable with each other so likely were "mates".

Jump forward, now, to 2011. We're about to encounter Dennis Tanner again, still played by the original actor, Philip Lowrie. Over the years, we would hear the occaisional remark from his mother, Elsie. We know he was in jail at one point for scamming senior citizens. He left the show with a new bride, Jenny, but very likely that didn't last. Rita is set to encounter him and will remember him and apparently Norris is not going to like this intrusion into his safe little life one little bit.

That brings me to my next point.

It seems to me that Norris has turned into Percy Sugden. Norris has very high regard for his landlady and good friend, Emily and we know he's harboured romantic unrequited feelings for his coworker Rita. She gently turned down his marraige proposal several years ago. Any time either of them makes friends or becomes close to another man, Norris feels threatened just as Percy did with his place in Emily's life. He seems to think his place in their lives is about to be usurped and decides that the offending man is only trying to scam one of his friends and is not genuine. Emily's friendship with Ed Jackson from her church did turn out badly when he revealed he was the one that killed her beloved Ernest though was trying to repent for his sin. I wouldn't say Norris had anything to crow about though he did anyway but Emily was barely able to forgive Ed.

Norris' half brother, Ramsey was the biggest threat. Emily fell in love with him and this, on top of the resentment Norris already felt towards the man he felt contributed to their mother's death, had him apopletic with insecurity and rage. Ramsay was genuine in his feelings for Emily and that probably scared Norris even more.

Jed Stone, another long time ago character, landed a temporary bed with Emily, too and Norris was highly suspicious. It wasn't really a problem with Jed, though, it was his contact with Tony Gordon that caused the problems and brought trouble to the house of Bishop. Ray Langton took advantage of Mrs. Bishop's good nature (in Norris' opinion)

He was right about Richard Hillman, however. Richard's financial scheme to fund Emily money and gain control of her house after her death is not an uncommon or illegal practice but when he tried to kill her to get his hands on it, well that most certainly is!  He's even felt that way about Spider Nugent, Emily's nephew and wasn't too happy when young Graeme was offered lodgings with Emily nor did he wholly approve of Tina staying with Rita and was proved right the second time when it was revealed that Tina and Graeme had staged their breakup to engineer an immigration scam.

I hate it when Norris is proven right! ;)

Now, Dennis is returning. An old friend of both Rita and Emily. Are we taking bets that perennial landlady Emily will offer Dennis the spare room much as she did Jed Stone? Are we wondering if Charmer Dennis might turn his affections to flame haired Rita? Norris is sure to get a case of the wobblies and go around moaning portents of doom, like he does. I dislike Norris, who's a jumped up, nosy, annoying  little berk, but this storyline will bring the veteran actors into the forefront and that's never a bad thing. I'll be interested to see Ken lording it over Dennis or Dennis snarking at Ken for his perfect life and the fact that he's still living one door down from the house where he was born. Dennis might have fallen on rough times but he'll have put in a lot more adventure into his life, no doubt. I'm looking forward to hearing the fate of Elsie, long dead, I'm guessing, but having lived the rest of her life, happy in the Portuguese sun with Bill Gregory.

With 50 years of history to draw in, it's wonderful when they remark on a character long gone or an incident that happened in the past. I've really enjoyed the short lived returns of past characters like these and it's especially nice when they're played by the original actors (there's a great blog post here about recasting characters). The more this happens and is well received, maybe the more we'll see pop up on our screens. Corrie uses the sensational storylines and the younger set to try to attract new viewers, but they need to show the long time fans appreciation too, and this is just the ticket! Balance the high drama by featuring the veteran actors who can be just as popular with the younger set as the teens. It makes everyone happy!
Posted by Tvor at 11:38