You find Coronation Street in the most unexpected places 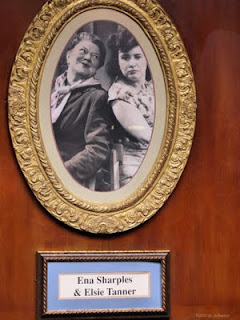 Don't you just love seeing Corrie references when you least expect it?

On my recent holiday to the U.K., I stayed in Manchester for a week and also visited London for a weekend. You would probably expect to see Coronation Street references around Manchester but it's still pretty cool when you come across one.

This photo is in the upper level of a pub on the main city centre street, Deansgate. The pub is called Moon Under Water and the building used to be a cinema which first opened in 1914. You can find it when you go up the stairs to the toilets, it's on the wall there along with some other photos, one of which is Emmeline Pankhurst, one of the early Suffragettes who was from Manchester. I assume the photos are homages to famous Mancunians or Manchester culture. 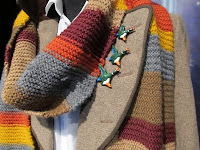 The next Coronation Street reference may not really be a Corrie reference in fact but whenever there are three flying ducks, what Corrie fan doesn't think about Hilda Ogden?

We went to London to see a Doctor Who exhibition in the Olympia Two exhibition centre on Hammersmith Road. One of the costumes displayed was the one that Tom Baker's Doctor wore in the 1970s and looky what I saw on the lapel of the coat!

Finding little touches like that always makes me smile. Have you come across anything similar?
Posted by Tvor at 12:30