It's all been he-said-she-said at the factory. Maria has been moaning and bitching about Frank for weeks and Carla has been pandering to him, keeping him sweet to keep the work on. Carla is in a tough spot, do you side with your staff and let the factory go under? Hard call. She's now believing that Maria overreacted and Maria blames Carla for making her go to Frank's that night, all dressed up. I'm kind of with Maria there. Work on his crush, get the order, not really the way to do business.

She certainly didn't ask for his attentions but he also picked up what he thought were signals. You fancy someone, they come to your house dressed in a sexy little number and share a few drinks. You might think you have a chance and move in. But no means no and he shouldn't have tried again. Frank just thinks he tried it on and got knocked back. Would he have raped her? I don't think so but obviously Maria didn't know that. 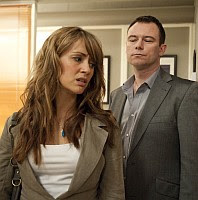 What Would Carla Do? If Carla had been in the same position, I think she'd have snogged him but manage to extricate herself before going further, leading Frank along and charming him until he thought that it was his idea to "wait". I don't really think Carla is all that savvy a business woman, like she thinks she is anyway. She never thought much of Maria in the past, why would she hire her? Maria might have been ok as a regular Assistant, much like Rosie was. Handle the phones, do some computer work, answer the mail, send out the bills. But handling a client? On her first day? Carla is as much to blame for the situation as Frank is!

Did Maria overreact? If you put yourself in her shoes, no she didn't. I think she's right in going to the police based on how she saw the situation but she should have gone straight away, not weeks later. Now the police dodn't see it her way and unfortunately, that's probably right. Frank certainly  wouldn't get convicted for attempted rape though possibly sexual assault.

These things can be very hard to prove in a court when you're a woman if there's no actual evidence...torn clothing or bruises and the like. The fact that she's kept it secret from most people rather than going straight to the police that same night would go against her too. Maria's not wrong for feeling the way she did. Frank should have taken the first No for an answer. No excuses. But I also think Maria overreacted a bit after all was said, done and apologized for. I do think Frank was genuine in his apology, realized he'd crossed the line and regretted it.

Where should Maria go now? Well, not back to the factory, that's for sure. Maybe Audrey (and David) will take her back at the salon. Maybe she can work with Peter now that John's freaked out and ran for the hills. Maybe something new? What do you think?
Posted by Tvor at 11:30

I think anyone would bitch and moan about someone who attempted to rape them. Frank wasn't "trying it on". He was physically restraining Maria and when she told him to stop, he didn't. Maria had to struggle to free herself. I think Frank would have raped her and I think that is what the programme intended to convey.

Unfortunately, because it is pre watershed, the attempted rape scene was tame. They could not show Frank being violent or threatening. The writing, directing and acting was simply not up to the job of depicting a convincing attempted rape.

What would Carla have done? She would have been raped. After all, Frank had already revealed his intentions on being introduced by saying: "When I see something I want, I always get it". No woman can deflect or contain a man who is intent on raping them if he is physically stronger.

Carla is not to blame for the situation in any way and nor is Maria. Frank is. I don't care if Maria turned up at his house wearing nothing but a G string, a tassel over each nipple and a sign over her head reading: "I'm up for it". No means NO.

It's not true that the police did not see it Maria's way. The police have enough experience to realise that women don't ring them up and say they have been the victim of an attempted rape for a laugh. There was not enough evidence for a prosecution to have a realistic chance of success.

That decision would have been the same whenever Maria called the police. You are right to say that these things are difficult to prove in Court. Unfortunately, contrary to all the evidence and research, a lot of people believe that women frequently make up rape accusations for revenge or other motives. And they also believe that a woman in a sexy outfit accepting a drink alone in a man's house deserves all she gets. I really do wonder where people get these notions from.

Where should Maria go now? She should get a job at a Rape Crisis Centre and then maybe Coronation Street can try to undo some of the damage that their pathetic pursuit of ratings and headlines has done.

I do get you point and i would most certainly take this seriously in a real life situation. I do agree that this wasn't really presented realistically on screen. No most definitely means no. Absolutely and I am not implying that Maria was asking for it. What i'm saying is that Frank took the situation and misread it, through his own arrogance. It is presented to us, so far, that he was genuinely upset and sorry. This may be proven to be a lie but at the present in the storyline, we haven't been led to believe any differently. The story as we know it now is saying that maybe, just maybe Maria overreacted. We may be proven otherwise and she will be vindicated. Actually, I hope this is case.

Unfortunately, what Maria has been through is just as realistic as any other scenario. Women aren't always believed. There isn't always the evidence. And yes, some women do still cry assault and rape as revenge and that's very wrong. Some people will believe Maria and some will not. I think if Maria had gone to the police earlier, straight there from Frank's house, there might have been a better chance of conviction. Maybe not, but maybe yes.

I agree that in the end Maria will be vindicated. The trouble is that I am not sure how long I can watch sleazy Frank waiting for that to happen. I don't think he is sorry for what he did, only the consequences.

Women are rarely believed. The conviction rate for rape is around 7%. That is the cases that get to court. Maria's case would never even get there. Woman are not being protected and this awful story is making an apalling situation worse.