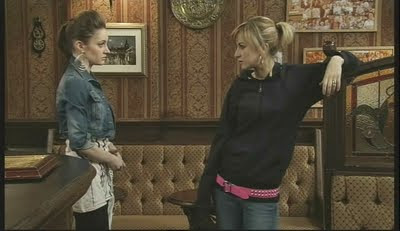 Yes, another post about Becky McDonald and Katherine Kelly!

I've never been shy about my support for both the character and the actor. A lot of people think Becky is over used and pushed into every storyline. They don't like her histrionics and they don't like her "me me me" attitude. I think because I like Katherine Kelly so much, I don't notice that it's "All Becky All the time" like some people do. I'm just as glad because I enjoy watching the character.

Now we've heard that Katherine Kelly is leaving the show by the end of the year or early next year. I"m gutted that she's leaving but I'm also not really all that surprised. Becky's been a loose cannon at the best of times and she's been spiraling into self destruct mode more and more, especially since Kylie showed up with Max and she persuaded Steve to get the money together to pay Kylie for custody. You just knew that was going to come back and bite her in the ass and it has, several times already. She's now got her worst enemy, Tracy, keeping her and Steve in line with threats of revealing her secret. Becky is being backed into a corner.

She's been dragging Steve down more and more. He's ended up covering for her, lying for her, putting himself in debt for her, and he's close to losing the pub and Streetcars, all because of her. The war with Tracy looks to be going the same way that Karen's war with Tracy went. Tracy pushed and pushed until Karen went over the edge and it looks like she's going to do the same thing to Becky. I reckon this marraige is going to end the same way, with Steve getting fed up finally and throwing her out, wondering why this keeps happening to him! Well, if you *will* keep marrying the same type of woman, exciting though she might be, you're just asking for trouble.

I just hope Tracy doesn't get her claws into Steve. I really *really* don't want them to end up together, and I don't care if it's for Amy. It's wrong, wrong, wrong but that isn't going to make Tracy stop trying. For her, Steve is the prize.


How will Becky leave? What will be her end-story? It's apparently going to be put in motion soon and carry out through the rest of the year, so says ITV. They say Becky will lose Max when Social Services finds out she bought him from her sister. We don't know yet who grassed her but she's going to think it's Tracy and is going to go on a rampage against Tracy. (see above). It could also be David, Kylie or even Gail if she finds out about the payments. Dev and Sunita know, too, as does Lloyd, Liz and Jim. That's a lot of places for it to leak out.

It's not all over yet between Becky and Kylie, either. They're either cut each other to pieces or maybe they'll make their peace before Becky leaves. I have a feeling that Kylie and David will end up with Max and maybe she'll grow up a bit and settle down. Or not. But she might. A bit. Being a dad might be just what David needs.

Oooh, I just had a thought! Another way Tracy could get the upper hand in Steve's life... Tracy still has that money that Blanche left her (presumably). I bet she's going to invest in the Rovers! I don't imagine she's got enough money to completely clear his debts but she's got enough to keep him from sinking and it gives her more of a hold! Watch this space! Don't you think it's a possibility?