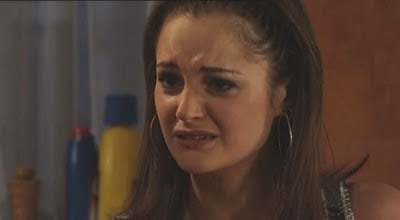 Kylie Turner burst into Weatherfield like a hurricane, causing havoc by selling her little son Max to Becky and Steve and blackmailing them whenever she wants. It seems her main motivation for anything is money, whether scheming to get cash off Becks or urging Xin to pay Graeme to marry her (with a cut for Kylie, of course).

We have seen a few cracks in her flinty shell before. She does seem to have genuine feelings for Max but shoves them deep away because she doesn't think she's good enough to be a mum. She's young and selfish, she's tough and she's had to be a survivor. 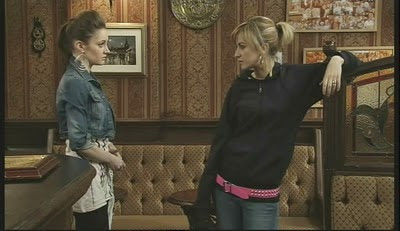 This past week, we got a glimpse behind the shell when she described her childhood in horrifyingly brief but descriptive detail. An alcoholic mother and an abusive father who beat and molested her and Becky both, while their mother slept off another hangover, I should imagine. She was pregnant at a very young age and had to try to survive on the streets. No wonder Social Services took Max.

Then, later,  she took a deep breath and asked Becky to come to her wedding and was rejected. I think she really does want to make a go of the marraige even if it's partly because it gives her security. I do think she is, at least, infatuated with David and sees him as a kindred spirit. We know Gail is going to offer her cash to leave David at the altar. I think the odds are pretty good that she takes the money and marries him anyway and uses the payoff to blackmail Gail who won't want her precious son to know what she's done.

Kylie could have been another tearaway, another Becky with a wild temper and no self control but we're seeing a different sort of woman. Kylie is hard, at least on the outside, she's greedy because she has nothing, she has no respect for anyone because she's had none herself, she's out to feather her own nest because she wasn't really given much of one to grow up in. She could be a real nightmare to watch but she isn't because Paula Lane, who plays her, is a fantastic young actor who brings electricity to the screen whenever Kylie is on it.

I felt that way right from the start, too. Sometimes it takes awhile to warm up to a character but there's an amazing chemistry between Paula and everyone she's been in scenes with so far. She just sparks off them all and lights up the screen. Kylie isn't a likeable person, but she's most definitely one that I am loving to hate and that's all down to Paula's performance.

Kylie and David might be the couple from hell but I think they're a perfect match. Unfortunately, they're probably too much alike to go the distance but it will be fun watching them rock and roll through their and Gail's world for awhile.
Posted by Tvor at 07:54