Who will win the War of the Websters? 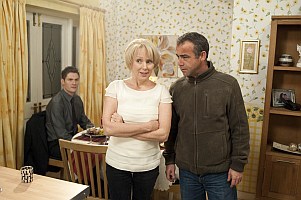 Most people seem to be enjoying the War of the Websters, shots are fired across the bow back and forth, but nobody seems to be winning any definitive battles. There are also a number of legal issues that have not been addressed.

It looked at first that Sally had the upperhand. She is the injured party, she has the moral high ground and milks it for all it's worth.

Kevin mostly seems to be scowling from the garage or a corner of the pub. He nearly pulled the mat out from under Sally by putting the house up for sale. Point to Team Kevin for that. But surely Sally would have some say in that? Surely her name must be on the deed as well? Is it legal for an estate agent to put a house up for sale when one of the two owners objects? I'm sure Sally's job contributes to the mortgage and household expenses, too.

Legalities aside (plot loopholes, anyone?), Kevin had a bit of an edge and Sally's initial attempts to put off buyers by leaving the house a tip didn't work very well. Her next attempt, having the Windasses over during a viewing was inspired. The Windasses, Eddie especially, would be off putting to the most determined buyer and he thought he was only being helpful! Point to Team Sally.

Kevin then tried to show the house to Lloyd and Cheryl who really should have known better, knowing the whole situation. Kevin only did it because he knew Sally had a new fella in the kitchen. It did scupper the date but I thought Team Sally still came out on top. She made Kevin look like a manipulative idiot in front of the neighbours and the ensuing row cause much upset to Sophie. I'd say that was another point for Team Sally.

Speaking of Jeff, I'm pretty sure Sally's just after a bit of flattery and fun and because it winds up Kevin, that can't hurt! He's probably not going to be another "love of her life" anyway. He's a bit too smooth and slick, I think.

The bickering and fighthing is down and dirty and both sides can hold their own. I think if there hadn't been a baby in the mix, it might not have felt like so bitter a betrayal and Kevin's love and custody of the baby (shouldn't that be legally signed and delivered, too? Just because Tyrone gave Kevin the baby, isn't little Jack still legally Tyrone's child?) has cut Sally to the bone. Sally's and the girls' utter rejection of the innocent babe has done the same to Kevin. Point to each, there.

There's another battle yet to come, according to the spoilers. Kevin's going to win some lottery money and hopes it will help him get Sally back but when he sees her with Jeff, decides she's not getting any of it. She finds out, of course, thanks to the wronged Tyrone and it all kicks off again. And so it should! They may not be living together but they're still married and Kevin should be providing Sally with alimony and child support at least for Sophie. There could be a case made for him not having to share the cash with her but most likely it should be taken into account with the settlement. 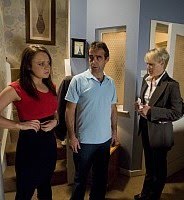 Speaking of which, Sally should have consulted her solicitor long since. She may have made him leave the family home, but if she's got custody of Sophie who's still a minor, she's due maintenance for her. She's also due a share of the garage, having supported him and helped with the books and administration for years. As I mentioned, she should be due half of the proceeds from the sale of the house no matter that Kevin seems to be implying that he'd get it all and she should be entitled to alimony/spousal maintenance and all of that should be recorded in a legal separation decree right from the get go. She ought to be telling Kevin to go through her solicitor if he wants to sell the house out from under her.

Will the Websters find their way back to one another? There will be an upcoming crisis when Sophie hits the breaking point and that may do the trick. Possibly that will only be a temporary measure. Personally, I hope the Websters stay apart. There's far too much that really can't be forgiven now. I don't want them to be like Ken and Deirdre, always getting back together, always having affairs and flirtations and having to forgive each other because they feel like they're stuck with each other and unwilling to make the break.