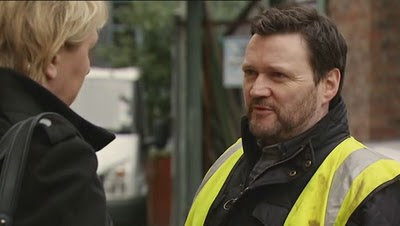 This week's Corrie, or at least the last few episodes, have been non stop misery haven't they? Even the slight bit of humour around Tyrone and Julie wasn't enough to lift it up. Hand wringing, friends falling out, revenge...It felt like non-stop nasty. The Dev/Steve money thing was bad enough but what really got on my tits was Owen getting in the face of Dev and Sunita and then taking his revenge on Eileen.

Owen is such a bully! Oh i really, REALLY dislike him. He's nasty and sly and most definitely has that cocky "little man" syndrome. He treats his daughters like posessions and certainly treated Eileen like dirt.

Her stealing from him was merely lashing back at his attitude. She'd never have done it, desperate for money or not, if he wasn't so horrible to her. And look how he's treating Dev! Only a couple of weeks' non-payment and he tries to bully them and downs tools and apologizes to Jason for taking a day's pay away from him. Why would Jason have missed a day's work just because the shop isn't being worked on? Owen's doing the Joinery and the Kabin as well as the flats over it and he's not finished. Surely he's being paid by everyone else via insurance. It's all blackmail tactics.

I know Eileen did wrong by stealing but she did pay it back almost right away. There was no need for him to be as hard on her as he was. She also shouldn't have told Sunita about his accounts which embarassed him. She should have known better. She should have known he'd have come back at Eileen. As usual, her gob gets her into more trouble.

He made sure he was standing on the street watching when Eileen was taken away and even waved at her with a big shit-eating grin. I'm sorry for the profanity, but he really was horrible. I hope his face freezes in an ugly knot when he finds out Eileen's been cautioned and set free. She's told the police she knew he was fiddling the books though he's got rid of the evidence. I wish they would put him on notice that they'll be checking his tax records and keeping an eye on him but I doubt that will happen.

I've got no problem with the actor, Ian Puleston-Davies,  he does a smashing job of making Owen thoroughly dislikeable. I can't even say that Owen's redeeming quality is his love for his children because even that is a power trip.

Charlie Stubbs was pretty much the same but had a little bit of charm at least and he's certainly not cut out of the same cloth as Len Fairclough. Len could be rough but was ultimately a nice fellow. Owen is not.  If Owen's not careful, he's going to end up with a statue shaped dent in his head and all!
Posted by Tvor at 09:49

Hmmmm....Owen and Tracey should get together!!!!!!! Both have the art of manipulation and nastiness down to a fine science! Good read!
Corie in Seattle

I might almost agree with you if it wouldn't be a repeat of Tracy/Charlie. I would enjoy seeing Owen bashed on the head and Tracy sent down again but i doubt they'll put her with this nutter. They'll save her for another one i'm sure.

Didn't Julie and Eileen make copies of those papers he stole back? I thought maybe Julie would get that gleam in her eye, produce the copies and send them in to the authorities.........one can hope. I would like to see that smirk smacked off Owen's face!

They did make copies but did they not give the copies to Owen and keep the originals? Perhaps they didn't make extra copies, i guess not if Eileen was charged. Though really, she would have anyway because she did steal from him but at least he could have been investigated for fraud of his own.