Peter and Leanne, Together again! 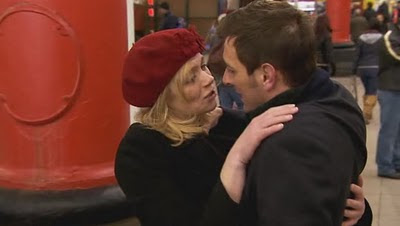 I didn't really think she'd get on that train. I really did believe they wouldn't split up my current favourite couple, Peter and Leanne Barlow. If i'm skeptical, i'd say i knew it would happen because there was nothing in the papers about either one of them leaving the show and Jane Danson wasn't headed for maternity leave or something like that. So, that's one reason.

But I also think they are a fan favourite couple and people really are rooting for them to be together. Is it Simon's devastated little face? Partly. But I, along with a lot of people, really believe Peter and Leanne are good for each other. As we know, they're both flawed and they both mess up big time and sometimes it's hard to forgive that. Leanne's affair might have been less of a betrayal if Nick hadn't stuck the knife in and twisted it a few times, encouraging Peter to drink so that Leanne would leave and go back to her first husband.

Ken was right, and i've always believed it. Nick and Leanne's affair was about the past. Leanne had some pre-wedding wobblies and Nick knew very well which buttons to press. He's as weaselly as he always was, smug, arrogant and up his own arse. And you know what? His father, Brian, was the same way. 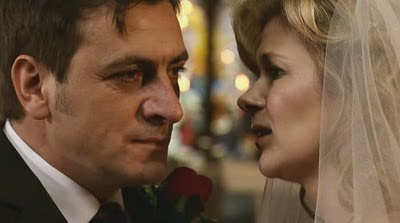 This whole week on Corrie was great! The blessing in the church started it all off with Peter blasting Nick and Leanne, his father, Deirdre and Carla from the altar. They all knew and they all kept it from him. Rock... hard place. It always is if you're in that situation. Should he have done it in a church? Maybe not. But he was so profoundly hurt and betrayed that he lashed out in the most public way he could.

Next up, he saw Nick go into the still-unfinished bar under the viaduct which is finished and the trams are now running again. (I hope we'll now get appropriate sound effects from here on in. We didn't get them for nearly 49 years of the show until they planned to have the disaster then oh... do i hear a tram? And it was only in the opening credits as a computer graphic train for a few years but nobody ever took the tram and you never heard it. But I digress...) 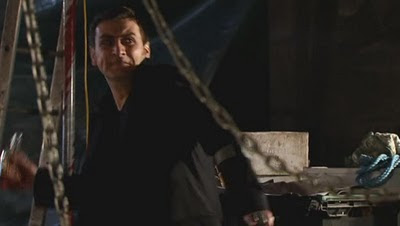 Yes. the Joinery. The scene of the disaster where Nick and Ashley saved Peter's life. I also didn't think they'd have Peter kill Nick in cold blood, even if it might be deemed a crime of passion. GBH is GBH and Peter would have the book thrown at him. Heck, he'd probably confess! He sure put a good scare into Nick though. I bet those designer kecks were ruined! I was glued to the screen, i really was. Then when Nick started rubbing Peter's nose in it, i literally hollered at the telly.

Honestly, the balls that boy has to continue to be such a bastard, to continue to twist words and make Peter think Leanne only married him out of pity. Peter almost believed it, i thought, but when Nick gave him back the bottle of whiskey i prayed Peter would throw it at him and he did! Yay! He did inflict some damage on Nick's leg, or i thought he did, but Nick was running the next morning so it must not have been much more than a graze from him falling over.

Peter finally broke down in his father's arms and admitted he "loved" her. But you knew it wasn't past tense. You know he was just so hurt by what she'd done and she knew it was her fault. She didn't think she could face her friends and neighbours day after day and was about to do what Leanne always does, a runner. I thought he'd manage to get her off the train but in the end, she never got on it and they reunited at the train station.

(Never mind that it was the wrong one. Trains from Manchester to London Euston leave from Piccadilly station, and that most certainly wasn't the modern Piccadilly, it was the much older Victoria station. Maybe they couldn't get filming permission for that day in the other one.)

I digress again. So what's next for Peter and Leanne? Will we have to put up with Nick's moaning and moping and petulant face? Will he go to Milan or will he stay and reopen the bar? I'm telling you, I'd not drink there. I think it's jinxed. First it didn't open because Peter got drunk and Leanne realized it wouldn't work. Then it was the site of a huge disaster with fatalities. He'd have been better off changing it into a rival factory or something.

Anyway. Peter and Leanne will probably have a few rough weeks but it will all smooth out soon enough. I'm predicting by this time next year they'll have a little bouncing Barlow either present and accounted for under the Christmas tree or one on the way. Watch this space!
Posted by Tvor at 21:37

Hi, I love your blog and you write really well about Corrie, just one little point that would add to the reading quality of your posts; please could you capitalise you're "I " s you do some times but not always, it would make your posts look even more professional.

It was a great week at Corrie, wasn't it, Tvor! Best since the Xmas episodes. Great write-up. I also wondered why Nasty Nick was out running the morning after high noon at The Joinery, and apparently getting knee-capped by Peter. He did look like he was in awful pain as he lay on the floor.

It is kind of hard to watch the show when, like us, you know who's leaving or going on leave. Somehow, I managed to blank all that from my mind and really thought Leanne was going. Which made is so much more fun when she didn't!

I think I'm the only person who wanted Leanne and Peter to split up! I always liked them as a couple, they made a great family with little Simon and it all worked so well. But after the Nick affair, I'm sick of Leanne. Okay, Peter's no angel - been a bigamist and has an alcohol problem and goodness knows what else - but I couldn't stomach Leanne bonking ghastly Nick when she supposedly loved Peter so much - a step too far for me. My prediction? she'll only bring Peter more heartache.

@Matron Thanks for the comments, I do realize my habit of lower case i probably does take away from the look of the blog but it's really something that is hard to break myself from doing. I've been doing it since i was in school and that's a good many years. I will try but i oops, I can't guarantee it! :) Fair point, though.

@Maggie i expect that was a continuity fluff, at least they could have had a throwaway line the next day about Nick having had to ice his leg and was working out the injury.

@seapenguin Leanne got caught up in her own past with Nick. yeah it was pretty icky (Icky Nicky?) and i don't imagine it will be a smooth ride for Peter and Leanne

I'm really pleased with the outcome of this storyline - I've been rooting for Peter and Leanne to get past this from the start! Leanne's affair would always have been a betrayal, but it was the timing and circumstances of it combined with the timing and circumstances of their marriage (plus, of course, Nick's underhand machinations and the fact that so many people helped keep the secret) that made it hit Peter as hard as it did. The state of mind he's been in thanks to his injury won't have helped, either.

Nick deserves everything he gets. I noticed on Friday that he is already talking himself up as having been the creative force behind the Joinery rather than Leanne - so typical of him, taking credit for something someone else has done to make himself look and feel better. It was much the same trick he's been using lately to undermine the Barlow marriage, talking Peter down to Leanne while promoting himself in contrast. Smug, slimy barstool!

I thought the scene of Nick out running the next day was intended to show us that Peter hadn't really done any damage to him at all - just caught him behind the knee and tripped him, so it hurt but didn't do any real damage. Hurting him was never Peter's intention - it was all about having the power to scare him.

I'm hoping that we get to see Peter and Leanne work through some of their issues now and enjoy a time of stability as a family!

Meant to add - I thought it was pretty clear from Peter's conversation with Ken the next day that he absolutely did believe Nick when he said Leanne had married him out of pity - not because Nick said it, but because it was what he was already thinking. And that was a big part of why it all hurt him so very badly - because he's so self-loathing at the best of times, but Leanne had made him believe she loved him, and now that felt like a lie. He's had her up on such a pedestal as the perfect woman that he was lucky to have. That's why Ken was at such pains to point out that she is merely human and fallible, just like him. Hopefully they will be able to start again on more of a level playing field after this.

Yes i too thought that Nick had pushed a few buttons and hit some sore spots as well. Well, it only stands to reason that you might think she married him out of pity thinking he was going to die anyway if she was having an affair with her first love. An affair is a massive hit to the ego and why wouldn't you think it? Of course Nick was going to play on that.