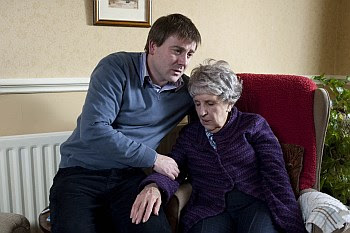 On t'other blog, Chewy thinks John Stape is a serial idiot. That's probably an appropriate term for it. Is he a serial killer? Not really, not in my opinion but death does seem to follow him around. He doesn't set out to kill anyone but there have been at least two deaths that could be termed manslaughter at his hands and he's covered up a third, quite literally.

He'll say, "all I wanted to do was teach"! He made a bad decision. He allowed a nubile student to seduce him and it went pear shaped from there. That weakness for younger women was just the tip of the iceberg. (After all, we've known Fiz since she was 16 and right out of school yet we never knew she dated Stape. She must have been very young and he in his early 20s at the time.) 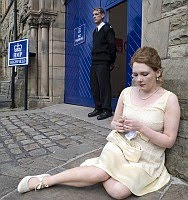 His affair with Rosie landed her father in jail and lost him his career and the woman he thought he loved. On impulse, he kidnapped Rosie whom he blamed and then Fiz came back to him. Now what do you do with a teenager in your granny's attic? Why, leave her there for your girlfriend to find. That sent him to jail but for some reason, Fiz still forgave him and married him.

But he wanted to teach and passive-agressive narcissistic psychopath that he is, decided there was a way to do it and it didn't matter how upset it made his darling wife because that's what narcissists do. He stole the identity of a former coworker, Colin, who was moving to another continent to escape a pissed off husband of a woman he was shagging.

Here's where it starts getting even more twisted. Lying to his neighbours who think he sells furniture and having to pretend when one of them wants a sofa. Attending a seminar for teachers and being discovered by another former coworker, the loopy Charlotte who was very clearly getting off on knowing his secret. The blackmail, having to fight off her advances, things were getting sticky. But Colin returned and wanted his identity back, as you do. You can't get a job without one! 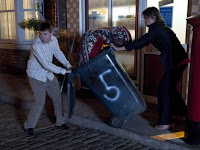 May the Farce be with you

Things took a turn for the worse.Colin dies and in order that the authorities not find out why he and John were arguing, John and Charlotte bury the body in the pit in Underworld which had been destroyed when Tony Gordon set it on fire. John seemed to be handling the guilt ok but Charlotte went round the bend. Perhaps she had been there all along? Turns out she was obsessed and fiercely in love with John because he saw her journals detailing her fantasies and obsessions about him when they worked together (but it turns out she had had an affair with Colin previously, as well. Love the one you're with?). And if you think things couldn't get worse, stick around. 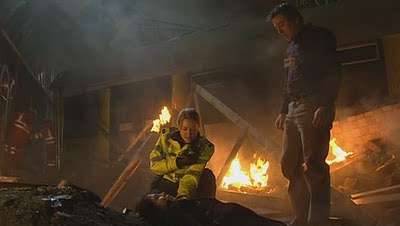 On the night of the tram crash, Charlotte went completely stark raving bonkers and went after him with a hammer, which had been used to put a wreath on the door. He grabbed it from her and chased her and bashed her on the head with it. That *could* be deemed self defence but she *was* running away from him at the time. I think a good lawyer could argue that he didn't have to hit her, she'd have gone right out the door safely, skull intact. An even better lawyer could argue that since she was going to expose his misdeeds, he was going to kill her anyway. Planned it! But alas...manslaughter, it is, then, because though Charlotte didn't die straight away like he thought, she was all but gone and he encouraged her parents to pull the plug.

At the same time, Fiz gave birth prematurely and his beloved baby daughter's life hangs in the balance. It's been over a month and it could still go either way. The guilt is wearing John down. John had to spend time with Charlotte's parents, who were introduced to him previously as Charlotte's fiance, Colin, at Christmas. Then Colin's poorly mother starting haunting him. She's dying and is frantic to get hold of her son. Have you tried a seance? No? Tough luck.

John's nerves are worn to a thread by now and he's helping out Mrs. Fishwick to try to soothe his guilt over knowing her son is really dead. When she found out, he confessed. It came gushing out like a tsunami, he finally was able to unburden his soul but it sent her into a final heart attack. He wouldn't give her a possibly life saving inhaler and when a neighbour knocked on the door, he put his hand over her mouth so she couldn't cry out. She died in his arms under his hand. Did he cut off her air supply? It didn't look like it but she was in the throes of heart failure at the time, angry at him and accusing him of killing Colin.

That's another death at his hands. He's already been to the doctor, wailing about guilt and unable to sleep. The doctor isn't really doing much more than giving him sleeping pills which is pretty dangerous when someone is as depressed and on edge as he is.

Surely Joy's death is going to be the death of John, or at least the death of the storyline. His blood pressure must be through the roof, he's not sleeping, he's worried about the baby and holding a lion's share of guilt. He's going to crack and he's going to crack wide open and it won't be long now, i'm guessing. We still don't know if the baby will survive and if wee Hope dies, with John in a straight jacket, how will Fiz go on?

I've always said that John was dragging Fiz down and this is the end result. Corrie women are strong so Fiz will find a way to manage but will she finally give John the boot or will she stand by her man, the man that's let her down over and over and over again.

John Stape is crumbling. He's not a bad man, not really, just self centred and single minded. He lies like it's second nature. He does things that he knows are wrong but he just can't seem to stop himself because it's either to get what he wants or cover up what he's done. One lie begets another and another. He doesn't set out to hurt anyone, but between his lies and the deaths, he's a walking destruction zone!

Looks like he's about to self destruct and it won't be pretty. It's inevitable, it's going to be sad, really, mainly because Fiz is going to be shouldering it all. Most of us would prefer John get what's coming to him but not like this. We want him behind bars, not in a padded cell but if he can claim temporary insanity, and clearly everything he's done makes him look a right nutjob, he can be redeemed and stay in the show.
Posted by Tvor at 08:49

Stape wasn't mentally ill when we first met him, and if he is now it's only because of his own choices. So I don't think he could get off on that defense. Not if I was the judge.

Great write-up, Tvor. What a tangled web he has woven. I think if the actor actually looked more creepy, we'd be quicker to want him axed/jailed fast. It's either really bad, or really good casting. Someone who makes such horrible and harmful choices in life would surely have it written on their face?

Thanks Maggie. I can't help thinking John always did have something wrong with him. It started with his affair with Rosie, all the lies while tutoring her mother and being with Fiz, he never once seemed to feel the least bit guilty and when caught, blamed Rosie. He's the adult, he could have said no. It went downhill from there!