Charlotte "Busy on Sunday" ... How close to the edge is she really? 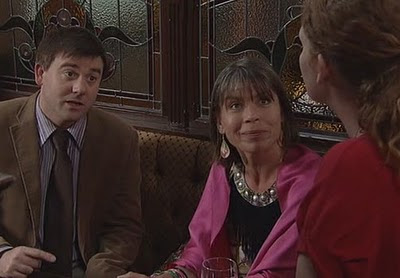 The last new character that came on board the Coronation Street Bonkers train was loopy Mary Taylor who is eccentric and completely off the wall (and getting even more so!). The latest one is Charlotte "Church" Hoyle played by Becky Hindley. She made a brief appearance all decked out in a sari of multiple colours at a going away party, the one where John decided to steal his former co-worker Colin Fishwick's identity papers. She was a bit off the wall then but she's back, bigger, bolder and just as colourful!

She calls herself a Free Spirit as far as her dress sense goes. I guess you could call it that. I bet they have fun dressing her in Wardrobe. You'd just have to hit the cheesiest market stalls or charity shops you could find, pick clothes and random and put them all on her! Some of them actually don't look too bad but she's definitely not a trend follower!

However, the fun in this character is her personality. She's as loopy as a macrame plant hanger!!! Clearly man-mad, she's honed in on John Stape and discovered his secret. And she's using it, boy, is she using it! She's going to be the instrument of his downfall, i'm guessing. She's thrilled with the idea that he's done something so sly and sneaky and now she thinks Colin might be returning from Canada, only because she's been following his Facebook status! Sounds like a stalker in the making, there!

She certainly has latched on to John, much to Fiz's dismay. It was bad enough that he did the whole identity theft thing in the first place but for someone else to know the secret, Fiz is going to lose her mind with worry! The longer it goes on, the more chance someone will find out. In the meantime, i don't think it's out of the question that Charlotte is going to try to blackmail Stape into the sack. She just seems that type. If you can't attract them with your natural beauty and sparkling wit, blackmail will do just as well! She's really enjoying winding up John and i'm really enjoying watching her do it! He deserves a little torture! Every time he tries to justify his actions, trying to manipulate Fiz into "trusting" him, i cringe and holler at the screen. There's something seriously wrong with that man.

Now, something just occurred to me. Spoilers say there is a body that turns up and rumours say it will be Colin Fishwick, the one whose identity Stape has stolen. You can pretty much predict that Stape will be found out and arrested for it. I've just had a Road to Damascus moment and I think the real culprit is going to be loopy Charlotte! I'm not wrong, am I?