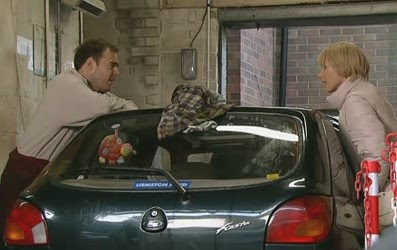 How hypocritical is Kevin? Sheesh! He gets all pissy that Tyrone was (he thinks) shagging Sally after what he did? Even if it had happened and even if it was a revenge shag, so what? I doubt it would have made anyone feel any better about the whole thing but it's none of Kevin's business. It's been awful watching these two be so horrible to each other, real "War of the Websters" stuff. Even worse seeing them hurl insults at each other in front of the girls, no matter that they are or nearly are grown up, it still has to hurt them and neither Kevin nor Sally seems to consider them.

But you know, it's fun, (because it's a soap) watching them insult each other and tear each other to bits and play tricks to get one up on each other and Yes!!! Kevin finally threw Ian Davenport back at Smug Sally after all these years!! She didn't admit it, though, kept to the story that nothing happened, lied like a real pro but they both knew the truth.

Some might say that Sally's reaction to Sophie and Sian having a shag shows that she's still not completely accepting of their relationship. But you know what? Sophie is 16. Remember Sally marching a 15 year old Rosie down the street to the clinic for a morning after pill? She had just as bad a reaction to Rosie having straight sex at a very young age. At least Sophie doesn't have to worry about getting pregnant!

Of course Tracy is going to blame Becky, it'll cause the most trouble. Naturally Ken is going to question her motives and it's clear that Deirdre wouldn't even think of considering that Tracy was lying. All so she would then be able to wail "Oh Tracy!!!" I had Claire pegged as Tracy's attacker pretty early on. There were too many "random" encounters between them with Tracy really being insensitive, arrogant and downright nasty to Claire with no respect at all for Claire's bereavement. 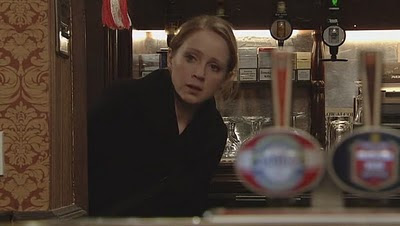 Claire always did have a temper that often got her into trouble so i'm not surprised at all she'd lash out. Not sure she should have been shown escaping her bail and high tailing it to France, though, but surely the police could easily find out where her mother moved and figure out where she went? I thorougly enjoyed Ken pointing out that most of the people on the Street dislike Tracy and Becky telling her that half of them helped Claire escape. None of that means anything to Tracy, though, like water off a duck's back. She probably thrives on people hating her!

Anyway Claire is gone now and though it does seem like contrary to Soap Law that she gets away with it, it wasn't an intentional assault and there's always the chance that the police would have dropped the charges or dismissed them. It's also a bit of a plot hole that she figures she's home free in France when they could very easily find her mother and thus, find her and bring her back. I guess we have to suspend disbelief on this one.

Slick Nick is sinking to new lows...As many selfish things as he's done in the past, he's drifting into moustache twirling territory now. Poor old Peter at the mercy of his insecurities and Nick's "friendship". But Ciaran has a pretty good idea what's going on, now will he manage to get through to Peter and/or Leanne or will Ciaran be banished? I wonder if Simon catching Peter has make him realize. I don't think he's been drinking since then, or at least, i don't think they've shown it. 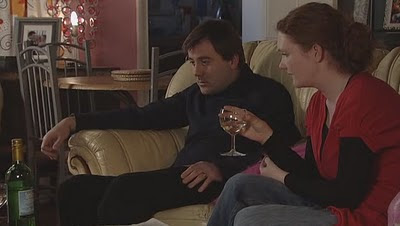 It was bad enough John was having the jitters over Charlotte's murder but then Colin's mother dies on him too. He finally felt compelled to confess to Joy but he held her spray away and put his hand over her mouth so she couldn't scream and then she died! Another Fishwick pops their clogs. Where's a knicker factory with a hole in the floor when you need one? I have to say though, Graeme Hawley was astonishingly good in the throes of a breakdown, little by little he broke apart as it ate at him, inch by inch. John always makes it more difficult than it has to be. Definite sign of him falling apart, he can't even lie with logic anymore. Not that he ever really could. The only way to save John's character now is to send him into the psych ward. He'll be unfit for trial and probably can get off on temporary insanity.

From starting off as a really boring character, they've made John into something a bit more interesting. At least it's enjoyable watching the storyline. (Well, *I* have enjoyed it anyway) And Graeme Hawley is hitting it out of the ball park with his performances.

There's Maria getting in with another nutjob. Thing is, even though she was warned, Chris is very good at a first impression. I'm sure Cheryl knows that all too well. Men like that never show their true colours until they've got you well and truly under their thumb. I hate to see Maria going through that but I think Maria has enough gumption to get out before it gets too awful. I hope.
Posted by Tvor at 10:14

Email ThisBlogThis!Share to TwitterShare to FacebookShare to Pinterest
Labels: coronation street, state of the street

I've really enjoyed Graeme Hawley's performance as well, he's been consistently excellent and the whole storyline has been terrifically entertaining with loads of twists and nods to this and that. Also am wondering where this is going with Maria and Chris - she saw through Charlie Stubbs if I remember rightly, quite early on, and hopefully her antennae will get her out of there before any damage is done - so where are thery going with it? hmm..

Yes, Maria figured it out about Charlie when he nearly drowned David though she didn't see through Tony. She has got a bit more to her than you might think so i'm hoping though she'll probably get one smack from him, that will be enough to make her realize.

If it had been just the immediate reaction to Sophie and Sian having a shag then I'd agree with you about Sally's reaction, but it is what she says afterwards that mitigates against this view.

Specifically I would draw your attention to the conversation between Sally and Tyrone. (btw did anyone else think the weirdest thing about that conversation was Tyrone giving evidence of intelligent life?) Sally actually says she was hoping it was a phase.

BTW do you still think Sian is confused and not lesbian? I think the evidence is now that she is as committed to Sophie as Sophie is to her. It will be interesting to see who has the first affair and with whom.

I think Sally's ongoing doubts are being portrayed very realistically. I don't think many parents may find it easy to become 100% accepting within days or even weeks. Something similar has happened in my family so i can say with certainty that acceptance can take awhile but you love the child and that's the most important thing. You can be supportive even if you are still coming to terms with it yourself. Let's face it, in this world, there's a lot of prejudice and gays can still be treated very badly. You don't want your child/grandchild/neice/nephew to go through that so yes, you can accept something and support it but wish it was just a phase just the same.

Yes, I agree that Sian has proven her committment but Sophie's current attitude is driving Sian away. Still, this type of situation happens to any couple. Sally points out that Sian is Sophie's first love but won't be her last one.

Right, I think the issue revolves around the definition of 'acceptance', to me what Sally is doing up to New Year is tolerating rather than accepting.

You accepting, for me, includes realising that the child/grandchild/niece/nephew isn't going to change. If you still wish it is a phase that is not accepting it's tolerating.

I totally agree that it has been portrayed and written realistically. And I think had Sally accepted her daughter's sexuality this quickly it would have been unrealistic.

I see your point and i do agree. Yes Sally is tolerating up to now and it will progress to acceptance. On a personal note, my nephews came out several years ago. I wasn't completely surprised, though a little bit, i was, but i never thought it was a phase. (my father did!) I do worry that they could get hurt by some homophobic yobbo but they are who they are and i love them.