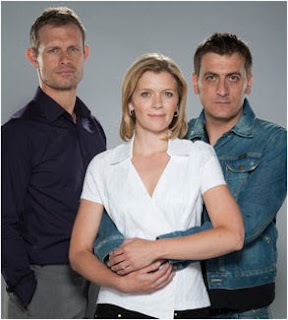 Just when I thought he couldn't sink any lower, Nick tumbles into the the category of "Lower than a snake's belly in a tire rut" as me grandad would say. Back when he first returned, I wondered if he'd end up with a babe or a broad, reckoning the two in competition were (single at the time) Leanne and (single and looking) Natasha. Little did i know he'd go for a two-hitter!

Although it takes two, and Leanne must shoulder some of the blame for her affair with Nick, I still place most of the blame for pushing it squarely on Nick's shoulders. He still harboured old feelings for her while she had made a new life with Peter and Simon. She was happy, I really believe that, no matter how bumpy the road got sometimes.

I think what she said about having a pre-marital wobble facing the committment is probably the truth, in addition to some old unfinished business. Her and Nick's marraige really blew up spectacularly when he insisted she have an abortion and then decided he would move away. She didn't go with him.

Now he's back and luring her into business with him and working on her until she gave in to that old black magic and it nearly ruined what she and Peter had. It still could. Nick isn't about to give her up. He is now working on Peter's frustrations and insecurity over his injuries and is going to encourage Peter to drink again. Poor Peter is not the strongest of men, whether it be a weakness for women or for drink.

Having paralysis, even if it's temporary, and probably a dose of survivor guilt, is going to work hard on Peter. He won't feel like a real man and he'll play right into Nick's hands. Nick is going to encourage him to have just the one drink, knowing damn well that's not how it works with alcoholics. And Leanne will find out, eventually. So that's really going to help his case, is it? I think not but Nick figures he can lure Leanne away before she finds out, and he figures she won't but someone will catch him at it, someone with Peter's welfare in mind. Oh, say, like a best friend or someone like that! Maybe someone big enough to knock 10 bells out of Nick (one can only hope!).

It's a pretty low thing to do but it doesn't surprise me. Nick has always been selfish, he's always gone after what he wanted and he might say that's just being bold and confident. But that's not how i see him. He's arrogant and selfish and shallow. He always was no matter who was playing him as an adult. As a child, he was just selfish. He is a user, too.

In addition to how he treated Leanne when they were married, there was Maria. He wooed her and got her to move to Canada with him and then ignored her while he worked on his career. She might not be the brightest bulb on the Christmas tree but she doesn't put up with crap for *too* long, (though sometimes longer than she should). He wooed her back when he returned to the UK and they got engaged but he just had to run away to Nottingham. She didn't go because she realized that he still had a thing for Leanne. Maria accused him of putting his mother, his ex and himself before her and dumped him. (Read about it here, dates July 5th and 7th)

Remember how he used Kelly to get inside information so that he could buy into the factory and then dumped her and subsequently sacked her. She's not the nicest person but she still didn't deserve that. And look how he used Natasha. He couldn't have Leanne so he went for the dumb blonde look-a-like, used her and dumped her when she became too obsessed and started pushing for committments. He then figured that if Tracy Barlow was offering it on a plate, it didn't matter how much he disliked her, he'd have some anyway because, again, he couldn't have Leanne. Nice.

He tried to work with Carla but she took off and he decided he could just take over the factory without a by your leave. She came back and gave him his marching orders so he stole her staff to work under the viaduct where he later rebuilt the bar (hmmm... trolls *do* live under bridges, don't they? Perhaps that's why Nick was so comfortable there!)

He was always a pratt and he still is and this latest escapade only makes me hate him even more.
Posted by Tvor at 19:26

Indeed - and it's not even a kind of love to hate kind of character either! I don't get why Leanne and Peter can't get a chance to thrive as a couple/family. Is there a new Law of Soaps that says we can't have any long-term couple any more? Hopefully Nick's ruse will fail.

Yeah there are very few happy couples. Although Leanne had jumped into lust with Nick, i really do believe she doesn't love him and this ruse is bound to fail because it's so nasty! I hope in the end when it does blow up, Nick will leave town. With Leanne ending up with Peter, as i hope, there will be nothing left for Nick there.