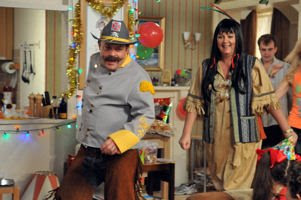 It doesn't usually behoove soaps to have happy couples. There's no drama in that. Even Coronation Street's happiest couple, Roy and Hayley, have had their trouble and strife and the newlyweds, Tyrone and Molly, are about to have an upset too which I personally think is a terrible thing to do to them!. Some characters seem to be perennially losers in love. Curly Watts was one, and so was Fred "Serial Proposer" Elliot. The irony was, when Fred finally seemed to find the right one, he died on his wedding day!

That brings me to Eileen. Eileen has always been portrayed as a Love Loser. She always talked about how she could never keep a man in her back history. We've seen her have several romances over the years and they all ended badly. Dennis Stringer left her for Janice Battersby, Phil the Foot Doctor preferred Gail, Jerry Morton had too much family to take care of and Pat was a love rat from the get go (said he was married but he wasn't, just pretended so that all of the women he was after wouldn't get to close!). Now, we hear that the fella that played the cowboy to Eileen's Indian maiden is coming back. That was Jesse, if you will recall. His wife had just left him and the act in the lurch. 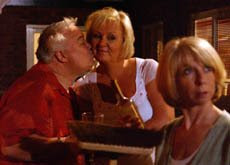 There was a spark between them but Jesse had other professional committments. He's going to come back and into Eileen's life. Only, he's being played by a well known actor, John Thompson which pretty much guarantees he's not going to be joining the cast as a permanent fixture. That means Eileen is going to lose out again and that makes me very sad.

Why can't they let her have a fella for at least more than a few months? Have someone want to marry her (and isn't looking for a "green card" to stay in the country). Have someone sweep her off her feet (and not have a wife in Leeds and another one in Prestwich). Even her rival, Gail Platt, gets to have real romances even if they are serial killers or prescription drug addicts!

Maybe they'll have this romance go a little distance. Maybe Eileen could have a relationship with Jesse even though he's off doing his children's act all over the country. She could go visit him where he's working. He could be a recurring character and visit her and he wouldn't even have to be on screen. They could just write her away for a "dirty weekend" in a nice hotel in town or at his flat. We could see her getting to terms with a computer and chatting to him online with a webcam. Why not?

I have always loved the character and Sue Cleaver, who plays Eileen, is really brilliant. whether she's being sarcastic, or covering up a deep hurt, whether she's defending her chicks or berating them for another stupid move (usually Jason), whether she's dealing with her whole world turned upside down or she's lending a shoulder to a friend, Eileen has been one of Coronation Street's real strengths. Long may she rule the roost!
Posted by Tvor at 10:55

You are correct!! Poor girl!