The State of the Street - May

May's been quite a month for Norris, hasn't it? All along, Mary's been giving him the glad eye and it's been clear to everyone that she fancied the pants off him. It ended badly when she finally tried the ultimate seduction, in a motor home of all places, and it didn't go well at all. Off she drove into the adventure of her life, alone. Norris really doesn't have a traveler's heart, you know? Change and spontenaity, thy names are not "Norris". He has a soft spot for Rita and I think he only wanted to leave because she was involved with Colin which put Norris' nose out of joint. I'll miss Mary. She was absolutely, brilliantly off the wall, especially after her unseen mother died. At one point, she told Emily there were times she could have cheerfully strangled her mother. I wonder.....

And now he probably *really* wishes he'd gone off with Mary since his long lost older half-brother has shown up. Did I hear correctly? Was Ramsay adopted out? Norris said that when Ramsay appeared in his mother's life, that's what sent Mrs. Cole into a tizzy, so much so that she died..... a year later! I think it's not about Norris resenting Ramsay for the death of their mother, I think it's about Norris resenting Ramsay for taking her attention away from him! It's also about that thing about Norris not taking change very well. And it's about to happen all over again as Ramsay becomes friends with Emily and Rita, whom Norris regards as *his* friends and he is not about to take a usurpation lying down.

The fallout from the reveal that Colin fathered Julie and took advantage of a 14 year old Paula took up most of May. On one level, this had a definite "ick" factor, even more than Stape and Rosie's romps. These things happen and don't come out for years, if ever, in a lot of cases. I can picture how it happened, can't you? A young girl, full of hormones, trying out her kitten claws and being flattered by the attentions of a handsome older man. But that older man should have known better. When it call came out, Colin still didn't *really* seem to think he did anything all that wrong because, in his view, Paula was leading him on, his vanity and ego being as large as it ever was. Paula, though it looked to be out of spite, decided to go to the police. But that's exactly what she should do though the stress of it caused Colin to have another stroke and die. I felt sorry that he died but I didn't feel one bit sorry for his situation. I did feel sorry for Eileen having to cope with it all, not just the shock and revelation but the gossip and jokes at her father's expense. They'll all dine out on that one for a long time, I should imagine.

What it's going to do is give us a lot of good storyline between Eileen and Julie. I don't think Paula is going to be a long term character but she and Julie have a lot of stuff to deal with and work through. Julie has always been overly emotional and impulsive, the exact opposite of Eileen. Julie is going to want the storybook family and Eileen is going to put her walls up firmly. On the surface they have nothing in common and each is going to irritate the other to the eye teeth. At least, Julie is irritating Eileen. ("Eidelweiss"! Can't you just see Julie in leiderhosen leaping around a mountain meadow singing Do Re Mi?) Eventually, I'm sure they'll find a way to be sisters but it's going to be a bumpy road. I've really enjoyed the performances, though. Eileen only shows her feelings when alone or with trusted friends. Julie is over the top, to be a strong contrast to Eileen, and she wears her heart on her sleeve, her collar and waves it overhead on a big, bold flag. 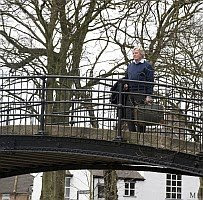 Ken bottled it, just like I knew he would. He didn't have the nerve to tell Deirdre to her face and he didn't have the nerve to tell Martha to her face either. He did exactly what Peter said he'd do and run with his tail between his legs. Martha was supposedly his soulmate but he still couldn't bring himself to leave the familiar, just like every other time he'd had an affair.

He tried to justify his actions to Peter by saying his marraige was one of convenience, (but only when it's been convenient for him!). He gave Deirdre the letter and she wasn't really surprised. He didn't think she should know, he just wanted to feel less guilty. Oh, but it's ok, because he chose her over his soul mate. Yeah. *that's* really going to make her feel better! I really enjoyed his confrontations with Peter, I really did. Peter's got his measure and he was right. This whole storyline was absolute top stuff! Now he and Deirdre are at verbal war. I am *so* enjoying seeing Deirdre finally fight back! Best line ever? Ken "and yes.... I need you" Deirdre "But do *I* need you?" I cheered. I really did!

Peter and Luke both fancy Michelle who seems set to run off for a temporary absence. Peter's drinking problem is lurking in the background and what is it about bad boys anyway? Luke Strong is a hero, he's handsome, he's up front and seems honest and upright. Peter has more baggage than Piccadilly Station's Left Luggage. From what I know, Peter's drinking problems aren't over and he's going to realize he can't do it on his own. I'm glad of that, it's far more realistic. Corrie never really has explored alcoholism before. Sometimes people would have a very short term drink problem but then got over it and were able to have booze when they liked thereafter. Ivy Tilsley comes to mind. Leanne was an instant cocaine addict and though successfully kicked it, still finds she's able to have alcohol and not worry about being tempted to drink to excess. Anyway, I look forward to seeing the rest of this play out for Peter but I wish Michelle would fancy Luke instead of Peter. Wait, no I don't. He deserves better! ;o) 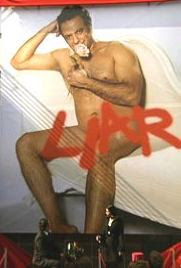 Tara really wreaked havoc on poor old Dev, didn't she? And I really think she went way too far, too. Yes Dev should have come clean but he didn't and Poppy, breaking the barmaid code (off with her head!), spilled the beans and Tara started plotting. Her elaborate revenge scheme ended up with little Simon pointing out that the retail Emperor had no clothes on! And if I lived in any of those posh flats, I'd be a bit miffed that this soft-core wall hanging was covering my windows. Dev's not the only resident, Tony lives there and I think Luke does too. There must be a few others. Tara is her mother's daughter, though, and no doubt she got her vindictiveness from Nina. Glad to see the back of her.

Dastardly David's back again. You didn't think his psycho days were over do you? He's nicking Joe's pain pills, probably a good thing considering Joe's growing addiction to them. He's slowly setting up Gary for another round with the cops but David isn't as smart as he thinks he is. It's a soap rule, bad guys always get caught. Eventually.

So when is Tony Gordon going to pay for killing the lovely Liam?
Posted by Tvor at 11:08

Luke Strong is renting one of Tony's flats at Victoria Court, and Dev obviously lives there too, but I thought Tony and Carla's flat was somewhere else near the Quays? I thought it was Carla's flat actually that she had with Paul before she met Tony so I'm surprised she hasn't asked him to move out.

Yes, Carla and Tony were living in her flat but he also, I think, owns one in the new development which is why i thought it was odd that we only ever see him in hers. Maybe he bought it for an investment and rents it out.