I know that not every character can be on screen all the time. There are usually a couple of major storylines and a couple of minor ones on the go at any given time and you see characters involved in those ones and some peripheral characters as well. There are also characters that seem to be around all the time but never or rarely have a storyline. I call them "Spare Parts". Mostly, they're great actors and their characters have so much potential that it's a shame they are wasted. They have had storylines in the past and they no doubt will again but it seems like they aren't front and centre too often.

These days, one of the "spare part" characters that I've noticed is Kelly Crabtree. I think Kelly is a fun character to watch. She's selfish and vain and thinks she's all that but she's not always very bright and she can be nasty, too. Yet she can also be perceptive and I think she could be a really good friend. Mainly, she seems to be around to strut her long legged stuff or gob off in the factory. You would never know that she and Becky used to be adversaries for the most part though there was a sharp mouthy exchange around the time Steve and Becky's relationship went public. I'd like to see Kelly get a proper storyline again! 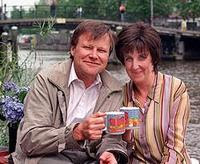 Hayley Cropper is sadly reduced to spare part status these days, ever since she returned from Africa. The occasional shoulder lent to Becky or Fiz and a sometimes appearance in the cafe, we don't see very much of her these days. There was a flurry of activity when she returned, when she'd had a crush on her do-gooder-turned-love-rat volunteer team leader and she tried to find herself a new job or volunteer position but then...nothing. Let's see her get more involved in a friendship with Anna or have she and Roy finally plan a wedding now it's legal for them to do so!

They've brought Teresa back to the Street but really haven't done anything with her, nor with Darryl and Amber lately. Amber may be gone to London to attend uni and will anyone miss her? She's not been involved in much for awhile. Will this mean the end of Darryl and Teresa or will someone give them something to do? Dev has gone underground after his humiliation but that's understandable.

Another character that seems to be "resting" is Sean Tully who hasn't had a storyline of his own since he and Marcus broke up. Perhaps that's not such a bad thing, though, as he was front and centre for quite awhile for a couple of years. Michelle Connor is another of those characters that seemed to be the storyline darling for a couple of years and hasn't really left stage centre until her recent departure on tour with JD's band. There always seems to be one character that the Powers That Be seem to focus on and who gets storyline after storyline, but that's probably an essay best left to another post sometime!

In some cases, especially with the older members of the cast, they seem to be semi retired and only appear once in awhile as supporting members. This is often the case with Emily, Rita and Betty though Blanche always seems to find her way into someone else's business ;) What a joy when they are seen though, as they always have something to add to a scene. Even Jack Duckworth, though he's got a new storyline and friendship with Connie is only seen on occasion.

I would have said Claire Peacock was a spare part too but she's been popping up more recently now that Josh is a budding footballer and she's about to have her own summer crisis storyline so she's off the spare part list on which she's been malingering. Lots of people find her boring but I don't. She comes across as meek and mild but she's pushy, has got a temper and an iron will when there's something she wants. She isn't that far removed from Maxine in that respect.

Who else are your favourite characters that haven't seen the light of a script page for all too long?
Posted by Tvor at 09:16

I've been wondering what's happened to Liz MacDonald. Not so much a spare part as missing in action! It must be two or three months since she last appeared . . .

Hi State of the Street - I like your site and enjoy reading it. Thank you for making Corrie more exciting with your site. Corrie Fan.

Thanks for the compliments!