The State of the Street - June

I really fail to see what Molly sees in Kevin! I've been dreading this thing between Kevin and Molly, I really have. If they had to do it, couldn't they just have Kevin with a one-sided crush and Molly firmly kicking him into touch? A crush, I can understand that happening. It can happen to anyone. Molly is loyal and she loves Tyrone and even him having trouble accepting Jack's friendship with Connie shouldn't be enough to push her into his best friend's coveralls, not even on a soap! But the more I think of it, you know... Molly does have form being the "other woman". She chased Kirk trying to take him off Fiz and she chased Tyrone as well, when he was still keen on Maria so maybe it's not so out of character after all! And Tyrone... Well I understand that he thinks the world of Jack and he misses Vera terribly but he has to understand that life moves on and he should be glad Jack is happy.

David set up Gary over the burglary and the Windasses try to band together with fake alibis, as per usual, until there's more serious charges then Len cuts and runs. You know, Gary as a character is settling in a bit and i do like Anna but the other two, Eddie and Len, can go pound sand and I don't think the family has gelled at all. Maybe that's why Len has already been chucked out of the house by his brother. I don't foresee them lasting the year out. Ted of course is ever the Voice of Reason, willing to forgive anyone (easy for him to say knowing it was David that set it all up and he wasn't about to turn David in, was he?)

A new romance gives Sue Cleaver some good storylines and this has been a good year for her. Nice to see Eileen having a bit of a romance for a change. It's probably not going to be a long term thing, Eileen is one of Corrie's love losers but wouldn't it be nice if this turned into the love of her life? It's also nice to see Jack finding some companionship as well. It's been a good year for all the senior cast members, really. Ken and Deirdre, Rita, Norris, Jack, Bill, and even Emily though she's mostly been the Greek chorus to everyone else's storyline but at least we've seen more of her. The only one that hasn't had a lot of storyline of that generation is Audrey who's been peripheral to things since she and Bill broke up, for the most part.

Pity we have to balance it out with a ludicrously contrived storyline about Stape giving Rosie the procedes from the sale of his granny's house just as Luke came up with an investment scheme for the staff! And by the way, Helen Flanagan's habit of delivering her lines in what she thinks is "uppity" and "snippy" is just speed-speaking and you can't understand half of what she's saying. You can still portray snotty and speak a little bit slower. In fact, it would make the condescension stand out more.

I think Fiz really has hit bottom, proposing to John. What have they done to this once-sparky redhead? I know i've said it before but it bears repeating. What are they doing to this character!!!

Further to the question about why Hayley hasn't had a storyline,Why did it take Hayley months to rip Pam an new one over selling sandwiches to the whole neighbourhood? Even Roy hadn't made any mention of it though the only reaction Hayley's had was a bit of a sneer once up until the last of June. Well leave it to Hayley to compromise instead of bringing the wrath of Health and Safety on Pam's head.

I'm continuing to enjoy Peter's struggle with alchohol. Um, let me put that another way. I'm enjoying the storylines and the performances. At the same time that Peter is struggling with recovery, Joe is sinking into the depths of prescription pain killer addiction. Another good performance here too. Doesn't Joe have a nasty mouth on him sometimes, though? But neither of them has been seen struggling later in June. I expect Joe's story will be ramping up now that Peter is coming to terms with his problem. 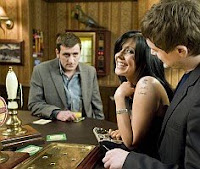 A refeshing change. Michelle had two fellas after her and didn't pick either one. Sensibly, she knew Peter still had a thing for Leanne and she wasn't over Steve. (But you know the best way to get over a fella is to get under one or two new ones! I guess that didn't work so well for her!) She's gone for awhile (while the actress gets new knockers and I guess we'll not see too much of Ryan either. But as I blogged over here, I'm guessing she'll be back early, pregnant and won't know who the father is.

It's so awesome watching Tony, the control freak, losing his marbles little by little though he's been pretty stable lately. We know that exposing his misdeeds are going to be at the end of it all. Is he really falling for Maria, or is it another move in his master plan to win her away from her suspicions? Natasha was just a diversion. I maintain that Tony didn't feel guilty about killing Liam but he felt horribly guilty when he realized Maria was pregnant and that might be his one glimmer of redemption. HE'll still have to pay for his misdeeds at some point. Murderers cannot be seen to get away with their crime. Once Carla comes back, she'll make sure Tony pays.

Poppy all of a sudden can't get along with Betty who takes advantage who probably has been doing that for the last 15 years, I suppose, but firing Betty?!!! She can't get away with that. Betty comes with the pub, everyone knows that! When it comes down to an ultimatum, and without Liz there to back up her mate, Betty rules the roost because heaven knows Steve hasn't got the gumption to smack Betty down and he knows that though the younger punters might not appreciate her, all the regulars certainly do and you don't drive your regulars away, do you? What gets me is that Poppy was a perfectly reasonable person until the last few weeks. The Personality Transplant Fairies whacked her on the head because they have to have a reason for her to never darken the Rovers' door again.
Posted by Tvor at 08:18

I find it hard to watch Molly and Kevin scenes too. They make me feel uneasy in my stomach, like watching cousins get married or something. Just not right.

I'm in love with Eileen's new romantic story-line. It's the way romance should be: fun, footloose and fancy-free! She lights up the screen, honest.

I love Connie too. I think she's just great. She just FEELS like a gran or something. Someone so warm that you could never hate. Someone who makes pies and gives great hugs and makes your troubles go away in the small time you spend with them. I was so mad when Tyrone was rude to her!

I was actually waiting for the Croppers to come to a head with Pam. Like a long time ago...

I can't stand Joe. He can leave with Eddie and Len for all I care. He's almost the worst character ever IMHO. I don't even care if Michelle Connor comes back. Unless something sensational happens, she's run her course I think. I even forgot she was gone for a while.

Oh, Tony is so crazy. His pot of crazy is really starting to boil to the point of spill-over!

ps. Tvor, I happened upon your pics of your last street visit = JEALOUS!

When Michael LeVell was here, we asked him about the then-rumours of Kevin and Molly and he didn't think Kevin would go for his best friend's wife but was pragmatic about it. It's just a role and he's happy if he's got a front burner storyline no matter what it is.

Joe is just fairly new on our screens in Canada and seeing him knowing his history, he's looking a bit p ushy and aggressive already!

I was very lucky to get on the set twice!