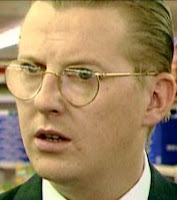 Norman "Curly" Watts, so nicknamed because his hair was straight, was a Weatherfield lad though we never met him until he was an adult working on the bins with Eddie Yates and Chalkie Whitely. He lodged with Emily Bishop and set up business with Terry Duckworth, an association he would eventually regret. Poor Curly was a smart lad but a bit gormless, especially when it came to relations with the opposite sex. He was keen and eager to please, like a puppy and that seems to be how most women saw him. Each knock back didn't seem to put him off, though. He was ever the optimist looking for love.

He had his first proper girlfriend in factory worker, Shirley Armitage, round about the same time as he decided to go back to school and get some qualifications in business studies. Curly and Shirley split (how could they possibly have made it work with names that rhymed like that!) with very little warning, really, having overcome racial discrimination at the start of their relationship.

Curly lodged with the Duckworths and started his retail career in the Bettabuys empire with manager Reg Holdsworth as his mentor. Bettabuys was the source of two major relationships in his life. First, the righteous Kimberly Taylor, whom he dated and nearly married. Lucky escape there, I think, because I think he let himself be railroaded into the engagement thinking nobody else would ever have him.

His next relationship was a fantasy. He fell hard for Raquel Wolstenhulme who had her own ambitions and never appreciated the steady and faithful Curly. She would be continually hurt by other more "exciting" men and keep coming back to Curly to pick up the pieces until she finally married him on yet another rebound. Curly thought all his birthdays had come at once and thought that Raquel might grow to love him.

She didn't. Curly had his heart well and truly broken. He knew Raquel would leave him eventually though it didn't hurt any less when she left him after only a year. He thought he'd try to travel the world and rented out his house to Samantha Failsworth but was only gone for about 6 hours in the end.

As he gained more confidence in his job, he started moving up the career ladder but had a bit of trouble with obsessive stalker, Anne Malone, who framed him after he rejected her amorous advances. This did have him saying good bye to Weatherfield for a time, hoping to find Raquel. He never did find her but in the process, seemed to have finally found himself. He discovered that he was a dad when Raquel returned to ask for a divorce, revealing that she had had his baby, now a three year old little girl called Alice. It seems like about this time, Curly came into his own and lost most of that daftness he used to have. He even had a makeover and it seemed to do the trick!

Before long, all-grown-up-Norman met police officer Emma Taylor and found the first real mutual love of his life. He turned to local politics and was elected town councillor where he really tried to do some good. Curly always had strong principles and a social conscience and this was a way to bring some good to help people. After he and Emma got married, they had baby Ben and his dream of being a full time dad was realized. He and Emma went through a rocky patch when her career nearly faltered because an unethical situation she got into clashed with those principles but they reconciled and moved away to Newcastle to start again.

We haven't heard from or about Curly since. I like to think he and Emma had another baby. Maybe he's involved in local politics or some other local group that works to better the lives of people that need help. Maybe he's running a Citizen's Advice Bureau!

What was your favourite Curly moment? Was it when he gave Raquel her own personal star in the sky? Was it the Reg and Curly storylines? What about when he freaked out on the Battersbys and ended up getting nutted in the head by Les? Wouldn't it be great to see Curly again?
Posted by Tvor at 12:48

it's all before my time - never knew there was such a character - sounds like there's enough there in terms of history and character make-up for the writers to think up a decent storyline to bring him back at least for a bit...