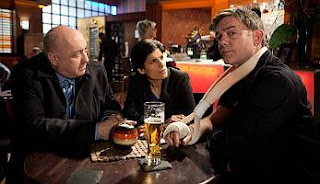 Wow! What a month! Brimstone and fire! Lies and damned lies!

You could see Karl being set up to be the villain of the piece from a mile away. Some might have said it was too obvious and it would turn out to be loose cannon Kirsty or something like that, but no, we saw Karl light the fire. One person, the expendable crew member (Toni) is dead and Sunita's life hangs in the balance. Karl can now be arrested and sent down for murder, possibly two charges of it once it all comes out and it will, of course. These things don't tend to drag on too long. Karl will let something slip.

I wonder if he'll actually be "eaten alive by guilt" or if they've totally ruined the character and have him feel a little bad but think it was a means to an end. He got to be the hero and if he and Stella get back together as anticipated, he's got the result he wanted there, too. He's already causing a lot of trouble between she and Jason and he's got his feet under the table at home. But it's a house of cards and it will come down around his ears one way or another.

It was horrible how everyone ganged up on Jason without a thought. I suppose if they could do it to Tyrone, why not Jason and later, Sunita? He checked and checked and checked it again. It couldn't have been him started the fire! Well, we know that of course. Usually they can tell if a fire has been started by an accelerant and indeed they could. Karl is setting up Sunita by putting the spare keys in with her things and pressing her *burned* fingers on the keyring which would more logically have been in her pocket once she'd "let herself in" so how did burned fingerprints get on them? That's too CSI for Corrie though.

The one thing that annoys me though, is everything assuming Sunita had it in for Stella and was trying to burn her alive. But Sunita was ushered out of the Bistro after their argument and she didn't know that Stella returned to the pub shortly after. She wouldn't have had murder as a motive. Ok, on the surface, it's possible if she *had* been out for revenge, that she might have set the fire not intending anyone to be hurt but of course our Sunita would never have done that, either.

I liked the little touch of having Rita be very upset during the fire, taken back to the tram crash. I'm surprised more of the residents like Peter or Nick didn't have similar moments. Poor Sunita probably thought "Oh crap", not again! It was the tram crash all over again, sort of! I also liked the little scene where Dev went to the cab office and confide in Lloyd. You forget that Lloyd was a really good friend to Dev after Sunita left and they got to be good mates.

And why did they introduce us to Toni, Paul's friend? To kill her off and that will cause trouble between Paul and Eileen who only barely got over her jealousy of Toni. Now she's got to compete with her memory (just like she did Lesley's at first). Is Paul's grief going to have him pushing Eileen away like he did when Lesley died? 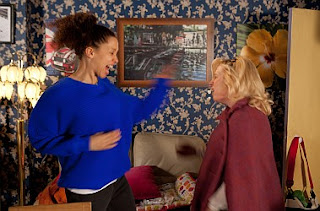 Tyrone's trial began on the last week of the month. The month progressed nicely with Kirsty's mother finding out about what was going on via Tina and Fiz. Kirsty even admitted it to her mother, because you know, it's hard to lie to your mum and her mother *really* understands and has her own guilt to deal with. She backed down and stood behind her daughter when she found out that Fiz is actually the one that Tyrone was in love with. Down deep she still knows the truth about Kirsty and her lies but maybe she's self-justifying it by telling herself that Tyrone cheated on Kirsty and pushed her too far. It's not true but you can make yourself believe anything to defend your chick. Deirdre Barlow is proof of that!

But after that, the stress started to get to Kirsty. She started losing control and screaming at the baby which scared her. A lot. She foisted Ruby off on Julie more and more, locking herself alone in the house with her own fears and doubts, making sure Ruby would be safe from her, I think. It worked it's way through her and eventually she slipped in front of two friends and slapped the one that's been her strongest defender, Julie. 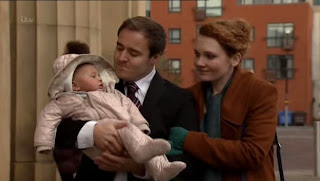 That did it. That opened the door for Tyrone to be freed. I didn't see that twist coming, I didn't expect Kirsty to blow the lid on the trial. I thought Julie's testimony would do that and Kirsty would later admit it but I'm glad she did it for Ruby's sake. She wouldn't want Ruby to go through what she did as a child and she could see it happening. The cycle has to be broken and she's done that.

Kylie and Gail are building bridges after Gail found out about Kylie's dual baby-daddies. She's horrified that Kylie has cheated on David and it's worse because it's Nick. She had all the ammunition she needed to get rid of both of the daughters-in-law she hates but could she do that to her sons? The children? It was quite a conundrum. I thoroughly enjoyed her sniping and snarling at Kylie. The thing is, now that Sally knows the truth, too, you just know the secret is going to come out. Well, it will anyway because secrets always do and the more people that know, the more likely it is.

I have a guess... I think Sophie will overhear the truth and take it upon herself to tell David because she believes he really needs to know. Is she a mini-Ivy in the making? Or just terribly immature and naive? I really love this storyline even if it is a classic soap cliche. I suppose there will be a little lull in this storyline while the pregnancy progresses with just scenes of Gail scowling behind David's back. I like all the actors involved and I look forward to more of it playing out.

And another horribly dull and pointless storyline, constructed to give a couple of actors something to do since they have them on the payroll. Can you guess? Katy and Ryan. You can't even made a decent "couple" name out of it, that's how unsuited they are. Kyan? Raty? Ryat? See? Can't do it. Chaty (or...Chesty? *snork*) at least has some sort of resonance. Chesney really did overreact. Ok, kissing Ryan was not really the smartest thing to do and admitting she wanted more? I can understand why Chesney was upset, especially when he had just proposed to her but throwing her out? A bit much. Now he's got to worry about the stall *and* look after the baby. I guess it was that ginger temper. Maybe they really do need to be apart. They were just too young, we all knew that.

What else was going on? Those were the main storylines, really. Faye continues to manipulate Anna and Owen so that she can spend more time with her biodaddy. Forgettable at this point. Eileen's jealousy over Toni seemed a bit out of character but she *does* have low self esteem so perhaps it's not so unlikely. I enjoyed the brief Full Monty. 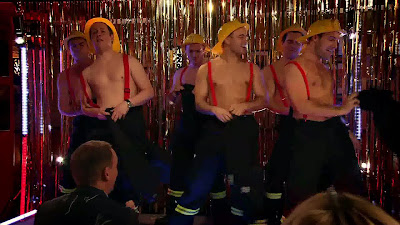 I enjoyed Flashgate, always good to see Steve and Lloyd humour. Gloria being a grasping grieving almost widow was almost a bit too much even though I've liked Gloria. This was a bit much but she has redeemed herself with her bedside vigil by Stella. That's the kind of acting I was looking for with this actress. The end of the month also began SpacecakeGate with Sylvia getting dreamy over the soap bubbles and getting the munchies after "herbal" brownies. I am going to enjoy this! Anything that gives the older set something fun to do is great in my book.
Posted by Tvor at 09:53