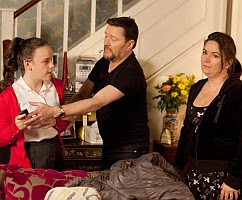 Though it began last month, this month we got into the meat of Faye's reunion with her biological dad. I remain skeptical as to how Faye really knows it's him, seeing as she hadn't seen him since she was 2. It could be just some creep that knew her mother. But the Social seems convinced he's the right bloke and he's turned his life around. I KNEW he would end up working on the Street, as soon as they mentioned he was a buildder, if not for Owen, then for Jason who's doing building work on his own now. It wouldn't have surprised me that Owen would give him a job just to keep a close eye on him but he's probably better off with Jason and maybe they could become good mates.

Faye continues to push all the buttons and push Anna and Owen's patience like any kid does. I can understand her wanting to get to know her dad and I can see Tim's point of view. Anna is worried she'll lose Faye and probably Owen is too but he really does go about it the wrong way and it's going to land him out on his bullying backside. They're probably aiming for Tim to fancy Anna and cause Owen to lose his tiny mind with jealousy.

Gail has lost a huge chunk of change to conniving Lewis who has fled to Belize. Does Audrey feel sorry for her? Does she heck! Well, maybe a little. I have to say i've enjoyed this whole charade. Gail had it coming, both for what she did to break up Lewis and Audrey and just for being so man-stupid as always! There was still one loose thread. Lewis found out Kylie and Nick's secret. I'm only surprised Kylie didn't tell Nick before she gave away Gail's password. Audrey's solution to Gail's problem is to let David and Kylie buy the house with a deposit lent by Audrey (probably some of Gail's money, returned to Audrey via Lewis. Oh the irony!)

Meanwhile Kylie's cracking under the pressure once Gail found out about a one night stand and she landed in hospital where Gail found out the whole truth from her blue eyed boy. Now what will she do? Will she break one son's heart? Will she end up being the cause of two marraiges busting wide open? Her family is barely clinging together as it is. This will shatter it irreparably. She won't mind being able to get rid of both Kylie and Leanne because she hates them both but she'll also lose both of her sons and David will go mental. We all remember what happens if he goes off his nut. 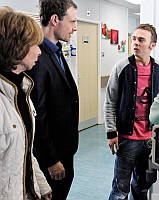 She nearly blew a gasket when Kylie got home from the hospital and David can't understand why Gail is so vehemently against Kylie, seemingly all of a sudden. With Nick making meaningful looks and Kylie shivering and scared on the sofa, Gail's refusal to apolgize has David throwing her out. Gail's rediscovered that Sally is her friend and now she's told Sally. The more people you tell a secret to, the more chances of it getting out. It might not even be Sally or Gail that blows the secret out of the water, it could be sanctimonious Sophie that overhears and decides she has to tell David. We'll see.

Two favourites of mine are back, Gloria and Sylvia! Sylvia developed a bit of a gambling addiction and Roy showed them how it should be done! Superb! Gloria had a fella on her tail, something I think is probably the norm for her! But he's a old dog isn't he? Knew all along that Gloria was only out for his money, didn't love her but probably enjoyed the companionship. Eva has been in a deep blue funk, with a pity party going on that would rival anyone's. He took a shine to Eva who liked the bling, and the flattery and he asked her to go away with him, just as a friend. Life's a bitch, then you die. And he did, in the Rovers. He wasn't the first and he probably won't be the last. I wonder what the point of it was? To show us all how mercenary Gloria is? We knew that already.

Also, things were going far too well between Chesney and Katy, they've been a happy couple forever so naturally, they have to throw a wrench into it and have Katy flirt with Ryan. Because, you know, they're paying the actor and they have to do something with him now and then and Katy and Ches haven't had a story since the post-natal depression she had. I wonder if Katy can understand what Ryan says because I can't, most of the time, and Katy's picking up his speech habits so their scenes are sounding like white nose which makes this storyline a non-starter for me. Fast Forward. 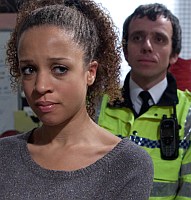 Tyrone did what everyone on soaps does, runs away and drives Kirsty's car through some very big plot holes. Why wasn't he charged with grand theft auto in addition to kidnapping the baby? I thought he had his own car before Kirsty moved in. Why has Kirsty not told the police that Tyrone isn't the baby's father? She's not put his name on the birth certificate, she could use it against him. Mind you, he could get a court ordered DNA test which would prove her lies. He had a car seat for Hope. Where did that come from? Fiz doesn't have a car does she? Stape did but it broke down and I don't think she's been able to afford to run a car. Besides, the seat was in the car before Fiz even gathered her things and joined him. Pah.

I was surprised that Fiz ended up turning Tyrone in which at least truncated this painful "on the run" business and nipped it in the bud. We'll have a court case near the end of March and (minor spoiler), Kirsty's mom will be in the picture, supporting her daughter. Or will she? I don't know what's going to happen but I'm going out on a limb and speculating that her mother will contribute to Kirsty's downfall. I really hope her mother will have found the courage to leave her husband and in turn, be the one that pushes Kirsty to tell the truth and get help. We'll see. We know, because it's soap law, that Kirsty will have to pay for her crimes so we'll lose Natalie Gumede sooner or later. I figure the trial will be the end and include her exit, or shortly after.
Posted by Tvor at 20:43

I honestly don't think Owen gives two beans about Faye; he just pretends he does to impress Anna. I can't stand that child, frankly; she's sullen, sneaky and pointless. Heaven help us when she hits her teens, if she's still on the Street.

Sylvia is pure gold as always but I can't stand Gloria and don't understand people's fondness for the character. Right from the beginning she was snotty with Rita for no reason except that she's one of these vile women who habitually puts other women down so she can steal their mean or something.

It continues to bother me that nearly everyone has accepted Kirsty's version of events without question. Ty has lived there for years and everyone knows he's about as dangerous as an oatmeal cookie. Kirsty hasn't been around nearly as long and until she started working at the factory, didn't really know anyone except Ty, Tommy and Tina. I know the factory girls aren't exactly rocket scientists, but surely they've known Tyrone, Fiz, and Tina long enough to give their views some weight? Eileen has been such a miserable cow, especially. Where's her sparkle gone? She used to be so wonderful, getting the better of Lloyd and Steve in the cab office. I want to see that Eileen again. :)

I think Owen is enchanted with the new family he's got, sort of a second chance maybe. No, I don't think he loves Faye as such but he certainly feels protective of her and of the whole family. Man of the house and all that. Faye isn't that likeable, no, but I remind myself what a horrible life that kid has had and a lot of that attitude isn't very different from lots of kids anyway.

It really bothers me, too, that Tyrone's long time friends don't believe him. And If the walls are so thin that Eileen has been able to hear the rowing so clearly, surely she'd be able to hear it's Tyrone's voice in pain, not Kirsty's. And why not a word from Sunita's side of the wall? Saying that losing Molly and then Jack to his best friend can change you? Yes it can but it's not going to turn you into an abuser is it? I will thoroughly enjoy seeing him vindicated and those fools shown the error of their ways.

Yes, I too miss our old Eileen. She used to be one of my favorite characters, but of late she's lost her sparkle. I also can't understand how she could get taken in by Kirsty. I always thought Eileen was smarter than that. Not only has she lost her luster, but most of her IQ points as well.

Iam so tired of this Kirsty Tyrone story line. Poor Tyrone, with all that poor boy has been through and even the very people who have known him the longest do not seem to believe him well; has the whole world gone mad? I hope he is vindicated soon and everyone that doubted him sees the truth and they should feel bad indeed to be taken in by such a mean and evil person. Well let us hope that there are better times ahead for some of our beloved corrie charecters.

On to the Gail saga, poor long sufering Gail, where is her sence?
Not only does she rip apart Audrey and Lewis's happiness and lives and all her notorious relationship bust ups and do not get me started on her choices of mates. Now with the situation betwees Kylie and Nick and David and poor Leanne, what has she done to deserve this, well ok that thing with her feelings for Peter but let us not foget he led her on. I have to wonder who will spill the beans on this one because it always comes out in the wash right?