Is Tim For Real? 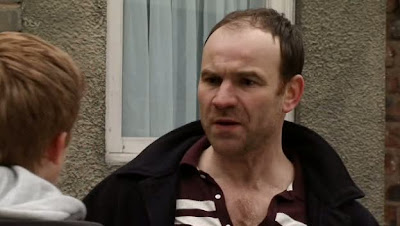 I've been watching Tim and thinking about him. He lost his temper with Chesney this week after Chesney bumped into him. Chesney was a bit mardy but Tim seemed to over react, as well, calling Chesney and idiot. Where on earth did that come from? I wondered if that was a crack in the "good guy" facade or if he, like most people, even nice people, can be in bad moods and lose their tempers now and then.

Later, he's overwhelmed by having to cook for his daughter and her new parents. I felt like he probably felt like he was put under a bit of pressure to do it by Faye. He wants to get to know his daughter, but he doesn't know how to be a father. Is he just drifting,  a bit at sea, trying to figure it out and figure out how to fit fatherhood into the life he had as a single bloke?

He seems happy that Faye is back in his life and seems ok with her being adopted by someone else. He doesn't seem to have a hidden agenda. Not yet. He also does seem to be concerned about Faye's well-being, as he should but when faced with the idea that Faye wants to stay over at his house, he seems reluctant. Or is it just because he sees that Anna doesn't want it and is trying not to give Faye mixed signals.He does appear to be keeping it at arms' length and making every attempt not to contradict Anna's decisions where Faye is concerned, watching her for her reaction and then backing her up. 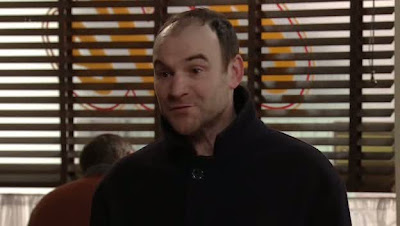 Maybe he really is a good guy. Good guys are allowed to have tempers and I am not sure the Powers That Be will have him be a secret psycho when we already have Bully Boy Owen on the other side of the situation. It would be better to have him be the real opposite to Owen rather than have Owen turn out to be the lesser of two evils. That little temper outbreak of Tim's did give me pause for thought, though.

Even though he left Faye's mother because she was a junkie, perhaps it will turn out that he's got a drink problem. You wouldn't get together with a junkie if you were free of all vice, would you? It doesn't seem likely that you would leave a child with a junkie just because it was the child's mother if you yourself didn't think the Social would have reason to think you wouldn't be allowed to keep a child. Or maybe he's just not quite ready to take on the responsibility of fatherhood. He wants to be a dad but he doesn't want the day to day hard stuff.

They are slowly drawing in the details and it's intriguing. Is he caught between a rock and a hard place, wanting to get to know his daughter and knowing her adoptive parents think he's trying to take her away when he isn't? Is he what he seems? Will he succumb to Faye's bratty manipulations and think she'd be better with him? Faye seems to go back and forth between wanting them all to be one big happy family and making her mother and Owen look bad so she can go live with Tim and spoilers say that's going to continue.