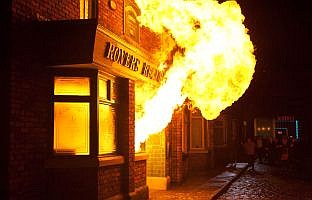 We all know the pub is going to "burn down". It's not going to burn to the ground literally. It's a brick building. But it will burn and it will be gutted out enough for a total renovation inside. Time to freshen up the set before the ITV studios move, I guess!

While it won't be destruction on the scale of the tram crash, we are heading into another disaster on Coronation Street. This week has the pieces of the puzzle being put into place and Monday will see them on the board in play.

We have the slow burn of Karl's resentment that's been building up for weeks now. Stella refuses to have him back and is flaunting Jason in his face, or so it feels to him. He has tried to make Jason look bad in Stella's eyes, he's tried to ruin Jason's business and it seems he's done that but it's backfired since Jason has moved into the pub and Stella's going to give him a job behind the bar. (What about Tim, I want to know?) He blames Sunita for his downfall, refusing to take any responsibility for his own actions. Now it looks like Dev and Sunita are back together and Jason is in his rightful place in the pub. 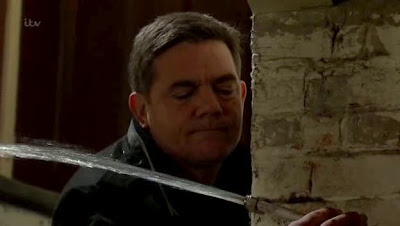 The pub had a leaky pipe, made worse by Tim who didn't turn the water off first like he was supposed to. The water went everywhere and Karl made sure it went into the electrical panel to short out the electricity to the pub. There! That'll put a wrench into the pub's business and make it look like it was Jason's fault. It didn't, though. And the pub reopened with water and candlelights and everyone had a great evening. Foiled again!

Karl even joined the Full Monty team because he knew Jason was doing it and maybe he thought he could do something else to make Jason look bad, I don't know.

Sophie has maneuvered Sunita and Dev back together. It was a bumpy road but it looked like it was going to happen. Dev drags Sunita into the pub to show off to the world that they've reunited, exactly what Sunita didn't want, dreading the reactions of the neighbours but mostly, they were surprised but silent.

All except for Stella who curlishly stirred up Dev's worst fears about Sunita. Why did she do that? Aside from asking him was he sure, she had no business as a friend or otherwise to put doubts in his mind and insult Sunita. Stella is supposed to be happy with Jason and Karl is ruined. Why does she feel the need to stop Dev and Sunita from getting back together? Move on, woman and if you can't, what does that say about your own life? 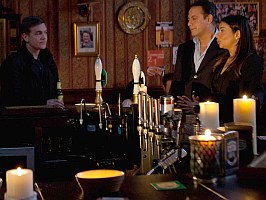 That aside, Dev is now showing his doubts to Sunita who isn't going to take it well. From spoilers we've seen and heard, she's going to blame Stella for ruining her reunion. There's going to be public threats and when the pub goes up in flames, is she going to be the first one suspected of arson? It seems so since Karl has been careful not to make any public declarations where anyone can hear. He's looking shifty, resentful and very, very angry though.

It's a given that the pub is going to burn. Is it an accident due to the water on the electrics? I'm guessing it is. The writers can't really think of a new plot device and accidental destruction worked the last time the pub went up in smoke in 1986 when Jack Duckworth put the wrong fuse in the fusebox. Put a little water in the wrong spot and surely that's enough to spark up a fire?

Ah, except it *was* done on purpose. I don't expect Karl thought it would cause a fire, just enough mayhem to cause trouble between Stella and Jason. It'll have to come out eventually. We've not heard that John Michie is leaving but how can he not after this? It might have been truly unintended so he may just do a short stint in jail instead.

I am looking forward to the drama, the tragedy and the new pub.
Posted by Tvor at 10:11

Great review, Tvor! I also don't understand The Beige Lady's motives for trying to keep Sunita and Dev broken up. What she did was evil, because she is keeping a family apart, and causing more hurt to Dev's and Sunita's children. What is her problem? That was just pure nastiness and revenge. It took two to tango, yet she's obviously forgiven Karl by giving him free drinks, getting him a job, etc. But she still feels the need to punish Sunita. Very hypocritical of her. I'm no fan of Her Royal Beigeness, but even if I had liked her before, I certainly wouldn't now. Oh, and the way she treats Jason! Now he has two mothers!

It wasn't a nice thing to do but I think it was simply a very ham-fisted plot device to give Sunita a motive for arson.

Yes, Humpty Dumpty, it was very ham-fisted, especially since the Corrie PTB want us to take The Beige Lady to our bosoms. Giving her this mean and vengeful streak won't expand her popularity. They should have thought of some other way to give Sunita a motive. The way they did it seems counter productive to their goal of everyone worshipping Her Beigeness.

And other quibble. A few weeks ago she didn't have enough work at the pub for Eva, her own daughter. Yet a full time, permanent position magically opens up for Jason! Did someone that we aren't aware of quit? Another example of sloppy writing.

Spoiler alert below. If you don't want to see any spoilers, quit reading my post now.

I just had another thought. I could be way off base, but is it possible that new producer Stuart Blackburn isn't as enchanted by Beige Lady as Phil Collinson was? Maybe he's gradually trying to take the luster off St Ella's halo, thus making it easier to drop her when her contract is up?

She's been horrid to Jason recently (Can't forgive her for that! Poor trusting, sweet Jason!), she's being hypocritical and two-faced about Karl (and spoilers show them kissing at Sunita's funeral), and she broke up Dev and Sunita after they decided to reconcile. All this in a couple week's time. Not exactly the actions of a character we're supposed to embrace. But it would make sense if we're supposed to start to dislike her. If not, then the writing for her makes no sense recently.

All great comments, guys! I agree, they're setting up Sunita so it looks like she caused the fire so it's all too obvious that she couldn't have and wouldn't. The want Stella to get back with Karl so that she can be shocked and horrified when she finds out he was the one that caused the fire, even if it was accidentally. I don't think he intended that when he shorted out the electrics but it happened.

To bad she didn't die in the fire along with her mom and Eva! Put Karl in jail and we would be rid of them all.

I'm not actually sure it is the fusebox that causes the fire, the preview at the end of the episode showed something..

I'm not sure either but i really don't think Sunita was the cause. There's only one other person it could be if it's deliberate.

Can't say I have any sympathy for Sunita's character.. You reap what you sow. And get rid of Karl!