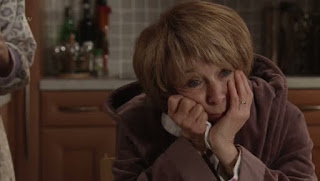 Gail now knows that Nick may be the father of Kylie's baby so she's the baby's grannie no matter which way it goes. Part of her must think that all of her Christmases and birthdays have come at once! Imagine! She could blow the lid off both marraiges and get rid of both of her detested daughters-in-law! But there's a very good chance she'd also lose both of her darling boys.

What's a monster-in-law to do?

She's got ammunition to hold over Kylie's head for the rest of her married life. It's too bad someone didn't remind her that she had an affair once and Sarah Lou's paternity was in doubt. That was a full blown affair, too, not just a drunken one night stand. Hypocrite, thy name is Gail (add  last name of choice here).

While Gail is thoroughly dislikeable these days, I am really enjoying this storyline. And, trying to look at it from her point of view, she's lost a lot. She's been humiliated and financially wiped out and has found someone that significantly contributed to that. You'd want revenge if it was you, would you not? You'd want the person to pay. If Kylie had done it out of spite or a cut of the cash, Gail would be well within her rights to go to the police but Kylie got herself into this mess due to her own bad judgement and was blackmailed into getting Gail's bank details. It doesn't make it right but the circumstances are a bit more sympathetic.

I know you're all saying, "But Gail got herself into this mess". You'd be right, of course. She made a huge error in judgement when she connived to break up Lewis and Audrey. By jumping to the wrong conclusion, she jumped right off a cliff. With her lousy track record in the romance department, of course she was wide open for a con no matter that she knew his history so well she used it against her own mother. Gail just isn't that bright and is too desperate for a flattering word.  She, like most of us, wants to be swept off her feet and Lewis swept all her doubts out from  under her. The tarnished knight pulled her up onto that big, white, horse and it's a long fall down from there.

Now Gail has to decide whether to break up both of her sons' marraiges or suck it up. If she keeps quiet, how on earth is she going to be able to keep it in for long? We all know these things come out and always at the worst time. Now that Sally knows, too, there are even more leaks in the dyke. 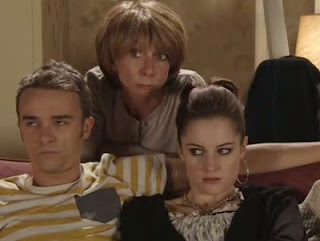 It might have been easier for Kylie to tell David she'd had a one night stand if it hadn't been Nick who stood with her. David and Nick are at loggerheads a lot and David, though he does love his brother, resents him and is probably jealous down deep that Nick is mummy's first born and the apple of her eye, in his mind at least. Gail has a firm grip on the apron strings on all three children though Sarah has managed to loosen them considerably.

I have no idea how this is going to come out. Will Kylie reveal her secret to David before Gail can? Will she be able to find out the paternity of the baby first? If it's David's, then the secret might die. But if it isn't, and in soap world where you need to keep the conflict going, there's a very good chance it will be Nick's baby. Now that Sally knows, there's more holes spurting water to be plugged but I have a feeling Sophie's going to overhear a conversation and we all know how righteous Sophie can be. She may well end up spilling the beans. Also, according to the way soaps usually work, David and Kylie break up, there's an outside chance that Nick and Kylie could end up together with Leanne glaring and David snarling at them from across the cobbles. I hope not, though. I do like David and Kylie together. It'll be interesting to see this unfold.

You covered it quite thoroughly, Tvor. Great post! And I agree with you. Gail is acting very hatefully and is a major hypocrite, but I'm still enjoying this story. In fact, it's one of the few I am liking right now. Gail is one of those characters we "love to hate", and I can't imagine Corrie without her and her (s)mother love of her "boys".

I didn't realize that Sarah Louises's paternity had been in question. Who did Gail have the affair with?

Gail had a love affair with Ian Latimer, the cousin of the man she was married to at the time, Brian Tilsley