The Rovers Landladies - the Runners Up

I, like many others, have not really warmed up to St. Ella of the Back room (aka Stella Price). Graeme blogged on the Coronation Street Blogthat he feels she’s a weak landlady when compared against classics like Bet Lynch and Annie Walker. They were the two most iconic landladies, for sure, but let’s not forget Vera Duckworth’s stint, which was a disaster from the word Go, Natalie Horrocks, the scarlet woman, and, another of my favourite characters, Liz McDonald.

Vera’s sojourn as landlady was bound to fail. The Duckies were trying to be upwardly mobile, trying to make something of themselves for once, but as usual, they didn’t have the savvy to make it work. Book keeping, VAT, and their tendency to take the profits out of the till led to their downfall. It was fun to watch them but we always knew there was a limited shelf life for Vera as the Queen Bee. Still, even though she lurched from crisis to crisis, she was a wonderful character just the same.

Natalie Horrocks was the woman that chased Kevin Webster and broke up the happy home of Kevin, Sally and the gurls. She was branded as a homewrecker and, indeed, that’s exactly what she was. She was the chaser, not the chased and let’s not get that mixed up with “chaste” because she most certainly wasn’t. Blonde, as all landladies of the Rovers must be, Natalie was probably one of the lesser landladies but still had the strength and vulnerability to carry it off. You grew to like her but perhaps Natalie was softened up a bit too much after her hard-faced introduction, and she seemed to become a bit too vulnerable for the job. She buckled under the strain and left. The talented Denise Welch played Natalie and was perfect for the character.

Shelley Unwin was the bar manager and landlady de-facto for a few years. That was during the trifectorate of Duggie, Mike and Fred. Mike bowed out early on and Duggie played mein host, bringing Shelley in to mind the shop. Shelley was a great manager. She was blonde, of course, pretty, sparky and strong most of the time. She was confident and friendly and knew her way around a bar. She had a confidence knock back, first after new husband Peter Barlow turned out to be a bigamist and then  at the emotional hands of Charlie Stubbs and it was all downhill from there. She got her mojo back and decided a fresh start  away from Weatherfield was in order.

Fred Elliott continued to run the bar but had so many irons in the fire that he brought in Steve McDonald’s mother, Liz  to manage the pub. Liz had worked at the Rovers several times in the past and fit the part like a glove. She, too, was blonde, this time around anyway, and gave it her all. She loved the Rovers and when Steve bought the pub after Fred died, she finally got her name over the door as licensee due to Steve’s criminal record, "Elizabeth Jane McDonald".

I think Liz is the next best of the classic iconic landladies after Annie Walker and Bet Lynch. Liz had the guts, she had the glory, she had the jubilant highs and crushing lows and still she put on a smile and greeted the punters like a pro. Liz had history in the community. She had friends and family, not just newly made up connections. She had lived in the Street for many years off and on.  She survived, she bounced back, she had terrible dress sense but we loved her anyway! 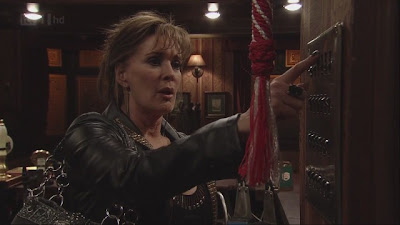 Liz fought for her family and for her business many a time. When daughter-in-law Becky’s actions threatened her livelihood, she broke out the claws and defended her bricks and mortar chick. But in the end, when her ex-husband Jim’s attempts at buying the pub to bail Steve out of a debt that Becky had instigated failed in a spectacularly botched bank robbery, she left town with tail between her legs in a  classic landlady leaving moment. A darkened room, memories surrounding her, she shut off the lights and got into a cab, doing a moonlit flit.

In some ways, Liz may even be my favourite, certainly favourite of the post-Bet landladies and landlords. When the trifecta of men owned the pub, even when Fred alone owned it and had a manager in place, it just wasn’t the same without that woman’s name over the door.

There have been other managers and short-lived wannabes (The marvellous Lillian! Fred’s bigamist wife, Eve Sykes.) but they didn’t make the grade in the long haul. Even the 40+ tenure of Betty Turpin Williams (no matter what any rewrite of history may say)  only had her in as temporary manager now and then. None of these women were blondes and therefore not contenders from the start. Liz had the grit and the glamour and the door has been left open for her return.