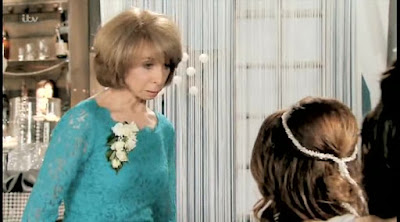 The groom is back in the building and his mother's back on the warpath as far as Carla's concerned again. Johnny is trying to talk Nick round. He's calmed down but he has realized he can't deal with Carla's self destruct mode. Gail won't be denied her revenge and slaps Carla hard. Forget calling her names though I'm sure that'll follow. But just because Carla hurt her child is no need to resort to violence. Demanding Carla leave and never darken Nick's door is more appropriate! Naturally, Carla believes she deserves everything she's gotten. 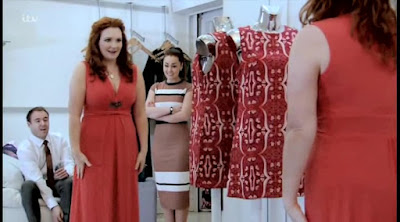 Kylie had to stay home and mind all the kids. Robert's not too happy with Tracy. Cathy's missed all the good stuff and so did Tyrone and Fiz who are still in the dressing room of the shop. Fiz did look nice in the orange dress and Tyrone, bless him, insisted she have it. And she's not even got anywhere to wear it, now!

Alex thinks Cathy should do the proposing. Why not, indeed? It's a leap year, after all. 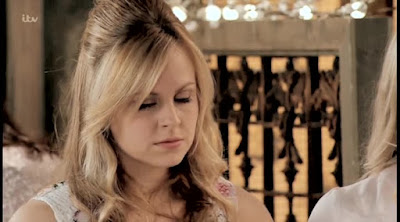 Audrey has uttered the phrase of doom thinking things couldn't possibly get worse for the Platts. Sarah shuddered. 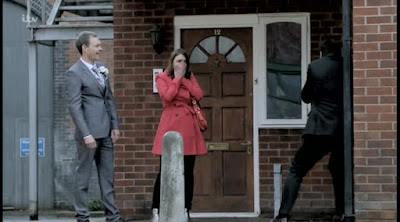 Tracy is crowing about her success. She's a great one to talk about Carla's moral compass. Robert's blaming the Bistro deal on Tracy. Don't call me mate and there's the second punch up of the night and Robert's dumped Tracy. Again. Please, to all the Relationship Gods, if you exist, please don't let them get back together again! 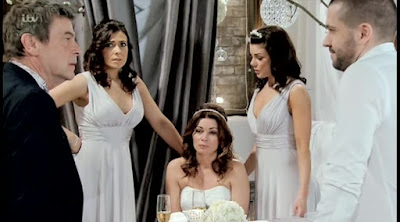 Why is Carla still sitting in the Bistro? Man, I'd have been long out of there instead of sitting there in danger of becoming Miss Havisham in my wedding dress. She finally left.

Tracy seems to have burned some very big bridges this time.

Max keeps throwing his paratrooper action figure out the window but Carla picked it up and put it in the car with her. 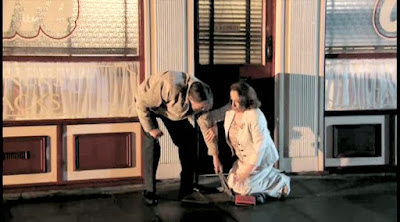 Timing is everything and Cathy's kind of sucks. She's down on her knee proposing just when Roy is trying to get the car to help Carla. That's all he can think of at the moment. He'll be mortified when he realizes.

Tyrone is trying to drive without his shoes on. Why do I think that's going to come back to haunt him? Or someone? 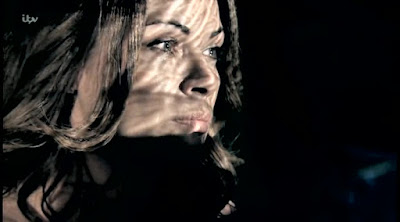 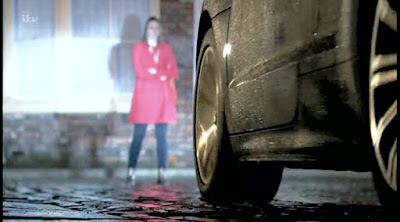 Carla is in the car and she's got Tracy in her sights. It almost looks like Tracy's daring her. Pedal to the metal, but she swerved at the last minute, with Tyrone and Roy's vehicles in the way. Carla goes off in one direction and knocks Cathy over and Tyrone's breakdown van goes right through Gail's annex wall. A HA! I can see what's going to happen now, can you? Damage to the annex and floor all broken up and Callum's body is discovered. 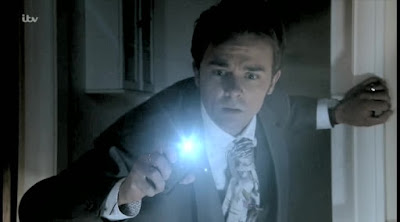 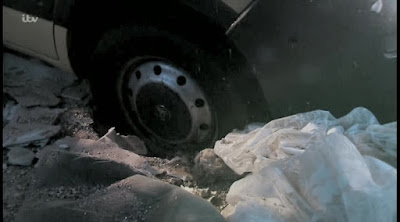 Carla's alive, Tyrone is ok but the annex is coming down around their ears. Where's Lily??! Oh she's ok, she hid under the table. Carla's a wreck. David's frantic when the truck starts sinking into the floor where the hole is. or was. David knows what's going to happen. 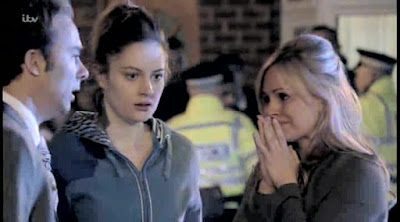 Tvor, you are a star! Thanks for the great pics and the play-by-play!

You are very welcome!

What's the name of the girl in the shop scene with fiz and Tyrone?