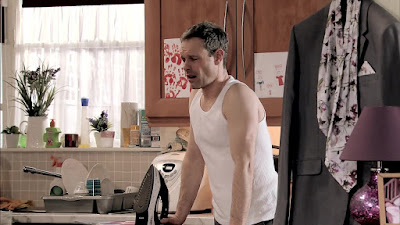 Nick ironing his shirt wearing only an undershirt is not going to make hearts flutter like Jason did some time ago! But Gail's dress is nice! Very surprised she didn't scoop the iron out of his hand and do it for him! 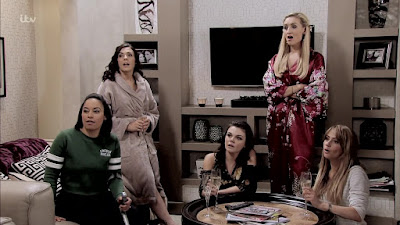 More women gathering to get ready, Eva and Maria doing hair and makeup. Still, like the other women over in Number 5, getting that wine down their necks but where's Carla going? She still doesn't seem very excited for a bride?

Robert can't help flattering Carla but is a terrible liar. What's Tracy up to? He doesn't know because she's gone AWOL. We know where she is! 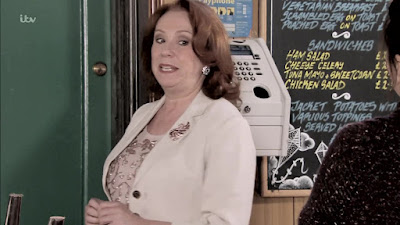 Yes, Roy does scrub up well. But Cathy, dressed to the nines, admitted she'd marry Roy if he asked. Good for you!

Tracy is going to pull out all the stops. Panic attack. Single kidney and needing medication. Single mother. And threatening the police. She's tried it all. He had second thoughts over the medication, though, finding some in her handbag, and believing her claims to having to have it 6 times a day. In comes Carla but Tracy didn't hear because of the radio, I guess. Lucky the pillbox fits under the door! 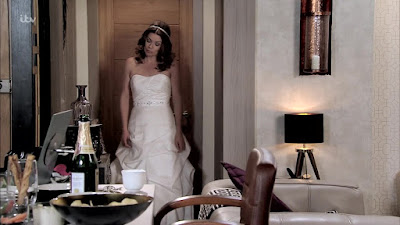 Even in her wedding dress, Carla looked glum. Pretty dress, though. There's the ugly bouquets. Someone should check them for black widow spiders, I think!

Nick's speech is sounding very cliche. Sean didn't do too bad trying to remember that poem even if it was just a couple of lines right and a couple wrong. (The Passionate Shepherd to his Love by Christopher Marlowe, in case you were wondering) 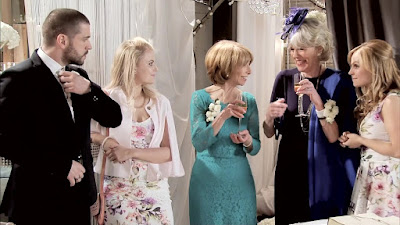 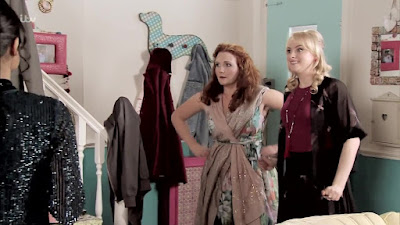 Fiz's dress got ruined and scarves didn't help. there's no time to go shopping so Tyrone attempts to save the day and....takes her shopping anyway. Why? They'll have missed the wedding. But later he says they can take a photo of her in the dress and not actually buy it.

Yeah. Using a car to drive 100 feet is a bit wasteful but i suppose it's better than a parade down the cobbles in them heels.

Johnny didn't need to be hanging about in the factory. Tracy was firmly locked in. Contrived so that he'd still be there when Jenny went looking for him. He filled her in and Jenny offered to be the substitute jailer. Now he owes her one and you know she'll take advantage. Roy ended up doing his original job of walking her down the aisle. If you can have an aisle in a restaurant! 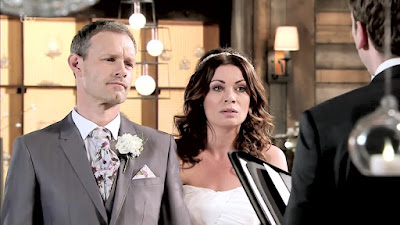 Oh, no. Lump in the throat moment. Roy telling Carla he's proud of her and Hayley would be, too. I wonder if that's what set her off. Nick is looking happy, interested in what the Registrar is saying. Carla just looks like someone punched her in the stomach and she wants to confess! Uh oh!