Jenny and Johnny - I can get behind them 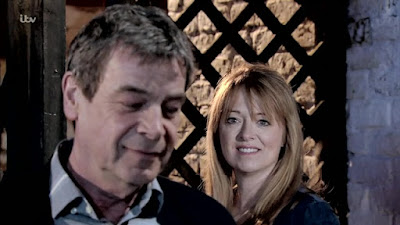 It's increasingly clear that Jenny Bradley and Johnny Connor are headed for a romance. We can already tell they're both starting to fancy each other and Jenny is looking for ways to entice him without making it seem like she's chasing him. "Keep 'em mean, keep 'em keen" is how Kate described the type of women Johnny likes and it seems Jenny is going to take that under advisement.

I don't think she's being underhanded or manipulative as such. Don't we all try to do things that will encourage someone that we are attracted to in order to bring them closer to us? Some people are more obvious about it than others, of course. Peacocks shake their glamourous tailfeathers, many females of the species in the animal world reject or tease the male, and stags lock horns on a mountain top. People really aren't that different.

I like Johnny and I like Jenny. I think she's grown up and matured and the tragedy she went through, losing her child, doesn't seem to have made her angry and ready to lash out like perhaps the younger Jenny might have done. Jenny is getting her spark back and is starting to stand up to bullies like Sally and that's a good thing. Johnny has been around the block a few times, done dodgey things but seems to be a good man at heart. He reminds me a bit of Danny Baldwin, don't you think?

I am pretty sure there is romance in the offing and I hope it lasts longer than a minute or two, like some relationships. I hope they don't put stupid and frustrating obstacles in the way, but it's a soap so I'm probably hoping against hope. I'd like Jenny to have a baby, too, even if Johnny is a bit long in the tooth to take on the responsibilities of being a new dad. I guess I just want Jenny to have a happy ever after, after all the heartache she's been through.