Mad Kirsty - What's up with her? 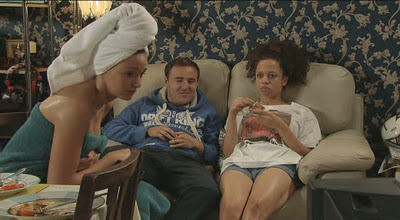 At first, I wasn't too sure about Kirsty Soames. I thought maybe I liked her. She did seem sparky and fun and lifted Tyrone's spirits. She had an awful lot of hair, though, even more than dull Cheryl so I worried...

Needlessly, as it turns out. Tina and Kirsty started off on the wrong foot and at first it seemed as though it was merely that. But you know, with soaps, there's always more to it than what's on the surface. Sure enough, Tina's claims that Kirsty was causing her grief began to sound more and more like a petty grudge with Kirsty coming off as the innocent party, victim of Tina's accusations for no apparent reason. That means, in soap terms, that she's the "little girl who cried wolf", aka, Tina's not just whistling Dixie.

It's becoming clear that Kirsty is actually doing things to sabotage Tina, and she's isolating Tyrone from his friends, especially female ones. She's showing signs of possessiveness and jealousy, beyond the norm. She's taking Tina's accusations and then throwing smug looks and icy stares back at her. Nobody believes Tina yet, Kirsty is that good at covering her tracks and making herself sound like just a bit on the jealous side.

The fact that Kristy is a police officer ups the game. This has happened before on a lesser scale when a cop boyfriend of Janice Battersby set up Les. He used his power to make it seem like Les instigated an assault on him when Les was just defending himself. But he forced Emma Watts to back him up, cops' honour and all that, and Les spent time in jail for it. Kirsty is using her position, too, to have Tina's car clamped, or having her harassed as a shoplifter. That puts a different spin on the pseudo-stalker storyline, I think.

She could very well turn out to be a nutter like some of the classic Corrie nutters of the past. There was nurse Carmel Finnan who became obsessed with Martin Platt. There was whack-job Maya Sharma who blew up Dev's shops, one with Dev and Sunita in it! There was Casey, Claire's friend who aimed at taking over Claire's life. Will Kirsty end up being another wild eyed bunny boiler? Actually, I hope not.

I hope they take this in a bit of a different direction. Kirsty obviously has control issues and she is most definitely possessive and jealous beyond the point of just being a bit protective of the one she loves. I don't want this to be an obsession. I don't want her to break Tyrone's heart though I fear she probably will. 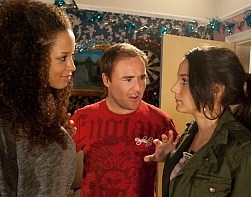 Kirsty is turning into a character I love to hate and that's down to the actor, Natalie Gumede who plays DC Kirsty Soames. She's great at those smug looks, when Kirsty manages to keep Tyrone on side and get one up on Tina. She does that icy look so well that the hackles on the back of  *my* neck twitch when she gives Tina one of those looks-that-could-kill behind her back. "I'll get you and your little dog, (Tommy) too!!!" you can almost hear her cackle. Any time now, I expect to see one of her eyes twitch with a full on psychotic wide-eyed stare.

It's getting to where I feel like everything Kirsty does and says is all an act to keep Tyrone under her thumb but once in awhile you see a crack of vulnerability like when Kirsty brought home an artificial Christmas tree but the rest had already bought a real tree and decorated it. She felt hurt and left out and it showed. But then the tree lost it's needles and she got to use hers after all. It was back to feeling smug that she got her own way again!

I think we've got a lot more story to tell when it comes to Kirsty Soames. I hope they make it interesting with layers, not just a plain bog-standard psycho yet again. Kirsty and Tina will probably never be mates but I hope they soften her a bit as she becomes more confident of Tyrone's love and she can make peace with some of his friends, maybe even make one or two of her own. If they don't, we won't see her for long. She'll burn out and become a villain instead of a complex character and that would be a shame.
Posted by Tvor at 08:51