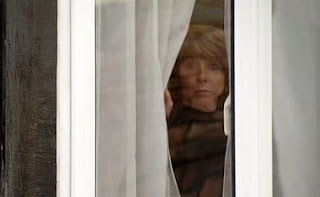 Lewis and Gail. After everything he's done with Audrey, the initial scam where he ran out on her, and past women coming and revealing his shenanigans, Gail falls for him? Well if it was anyone else but Gail I'd say she wouldn't fall for it but it *is* Gail we're talking about. How could she fall for his smooth, oily line? How could she do that to her mother who still loves Lewis and whom Lewis probably still loves as well.

She protests, she can't do it to her mother, so he continues to work on her. He knows it's just a matter of time. I can't believe she fell for the Hotel in Italy dream job line, almost the same thing he tried on Audrey! And she offered do the same thing Audrey did, get money against the house only this time, Lewis is determined to follow through. Deja Vu anyone? You'd think she'd connect the dots but it *is* lonely, desperate Gail we're talking about. And this time it's not going to end up well.  The month ended with Audrey finding out about the "romance" and  Lewis admitting what his plans were because he was blackmailing Kylie! 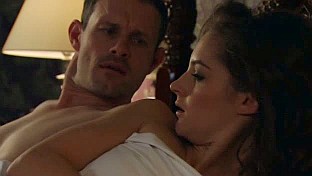 There's no surprise that Kylie was pregnant. It always happens if you have sex with the wrong person. The birth control pill question was covered with "I missed a few". I can't believe Nick had the temerity to insist Kylie have an abortion because it might be his baby! He hasn't really changed at all has he?

Whether she got pregnant or not isn't going to make David's reaction any worse. Or maybe it will with the added insult to injury of her having Nick's baby when she wouldn't have his. He'd be like that wouldn't he? Add the twist that Lewis found out and can hold that over her head, all in the most contrived manner possible, hiding under a spindly desk for a couple of hours. Did Leanne not miss him? He said something about being in the cellar with the bottles. I didn't think the viaduct had a cellar. A back room for storage, yes. Other than that clunker, and the standard soap cliche, I am enjoying this storyline as it dovetails with Gail's.

Nick spends a week or so after the non-wedding licking his wounds, watching Leanne with hurt, puppy dog eyes. Down deep he wants her, he really wants her. His pride and his pain wouldn't let him accept her apology at first and I can't blame him. I'm sure he felt that if Peter were available, she'd go back to him. Leanne tried everything and her last ditch effort, in typical Leanne fashion, was to run away, probably hoping he'd either prevent her or come running after her. And he did. 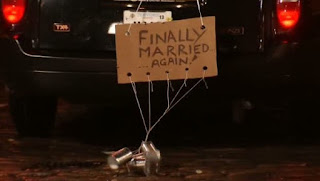 They got married in the end. I do hope she can finally shake off Peter. There has been enough of her back and forth with him. I'd hate for them to be the Ken and Deirdre of the future, lurching back to one another all the time. It seemed like once the wedding happened, Leanne is now over the moon for Nick when just a few weeks back, she was willing to fall back for Peter. I still don't think this will end well, never mind what will happen when the Kylie thing comes out but Leanne doesn't really have a leg to stand on up on that moral high ground, not really. 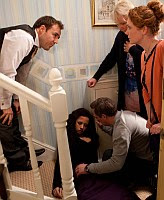 It was all about Kirsty and Tyrone this month as Tyrone careened towards marrying someone he didn't want to in order to get a claim on his daughter but Kirsty turned the tables on him. She fell and had Tyrone arrested for it, claiming he often was violent with her. But even without the photos Fiz had taken, there were scars, so Fiz had said anyway. Kirsty has managed to besmirch the reputation of a gentle young man that the neighbours have known for years yet Deirdre did have doubts, having seen what looked like Tyrone shove Kirsty in the yard and Eileen has heard the fighting through the wall many times. But has she actually heard Kirsty crying in pain?

All in all, though, some rivetting performances and Alan Halsall won an acting award for his work this year, well deserved. Natalie Gumede was robbed of her "Best Newcomer" award, though. Unfortunately, Kirsty has now crossed the line and this will be Ms. Gumede's exit storyline at some point. Baddies can't get away with it, Tracy Barlow aside. I don't know how this will end but it could still leave Tyrone child-less and certainly it will take awhile for his reputation to recover in any case. It just annoys me to no end how his friends are so willing to believe the worst on a bit of circumstantial evidence. It's been a very good storyline all around.

I'm not even going to get into Karl and Sunita. I hate this storyline, always did. That burned toast was appropriate. Both of the characters and the storyline have gone up in smoke. Hayley returned (for a minute) and made Roy and Mary make up.

This Jenna and Sophie thing really leaves me cold. There's no chemistry whatsoever between them that I can see. I can understand how Sophie would get a crush on Jenna, that makes complete sense. What is absolutely baffling is how a 28 year old professional who has absolutely nothing in common with an 18 year patient that only barely finished school and dropped out of college would find her attractive and fancy her, risking her whole career. Sophie is not what you'd call a dynamic personality. Jenna is out on her own, building her career, she owns her own house, (at least I thought she owned it but now it seems she's moving in with Lloyd to save money) and, prior to this, struck me as a pretty sensible woman. Nope. I don't buy it. And in this day and age, why would Jenna be so worried about coming out? Apparently her late father was homophobic but he's gone. Mandy seems a bit opinionated and she's obviously going to have some trouble getting her head around it but she'll accept it. I do like Mandy and I do like Jenna, I just don't like Jenna with Sophie.

All in all, I'd rather remember January as the month I visited the real Coronation Street (well, Granada Studios aka ITV in Manchester).
Posted by Tvor at 06:26

Totally agree about Sophie and Jenna - there is no chemistry between them whatsoever. Also seems odd to put Sophie, who still often seems like a child in her behaviour and speech, with a woman who is so much older than her. I suppose now Jenna has lost her job she'll be working in the factory/cafe/Streetcars before long!

The Kirsty/Tyrone stuff has been brilliant and so has Lewis! I'm gutted he's gone but hopefully he will be back.

I pretty much agree with you about Leanne.

She used to be one of my favourite characters and I still like her sometimes but I'm fed up of watching her bounce back and forth between Nick and Peter. I'd like to see her stay with Nick seeing as they're married now and they are good together but I'm not sure I see them lasting after everything that happened on Christmas day.

Peter is always going to be there and deep down Leanne still wants him. She proved that when she left Nick waiting for her at the alter, and went to tell Peter that she wanted him back! He sort of led her on under false pretences and she would have to be insane to want to get back with him now but this is Corrie.
Then there's Nick possibly being the father of his sister-in-law's baby. Secrets and lies never work out in soap relationships do they?

As for Peter, as much as he loves Carla, he seems to have lost sight of why he gave up so much to be with her. He's smug and far too interested in winding Nick up and I think there is only so much that Carla can take. No matter how much she thinks she needs him.

I think Peter's 'feelings' for Leanne are twisted because he despises Nick. Even though he wasn't happy with Leanne, there's bound to be a part of him that misses being in a 'family' and living with his son. Having said that, he could have got back with her twice but he always chooses Carla.

His relationship with Carla is never going to be easy but I would like to see them stay together too. However, if the writers are heading for another round of the 'love square', I doubt I'll watch it because I think it's pointless and very tedious now. The characters deserve better and so do the viewers.

Anonymous, yes it seems to be law that most resident must work on or very near the street and most young women eventually work in the bar!

Stacey, I think Peter is very much like his father when it comes to women. He had Carla throw himself at him so he decided he was unhappy with Leanne after only a few problems (miscarraige and later Leanne not able to get pregnant). He gave in to his attraction. Later, when Carla left him, he went scurrying back to Leanne at Christmas until Carla came back on Christmas Eve then it was "Leanne who?"