How do you deal with spoilers?

Over on t'Coronation Street blog, writer Scott has mused about the upcoming Rovers Return disaster. The spoilers are all over the media and on every cover of most magazines dealing with television. There is going to be a fire and the pub is going to burn "down", with at least one death involved.

First off, I doubt very much the whole pub will burn to the ground. It's a brick building. The last fire, in 1986, was pretty all-consuming but it was still only the inside that was gutted and I expect similar this time. That aside, it's nearly impossible to avoid this kind of spoiler which is similar in nature to the tram crash disaster in 2010.

Scott said that he loved the little scenes that are unexpected, for example, the scene where four characters re-enacted the Bohemian Rhapsody video in the building site for what was going to be Terry Duckworth's club. It was superb! Roy's recent casino foray was another such gem. We don't know about them ahead of time and  it's the small unexpected little things, a scene, or even a line, that makes Corrie so enjoyable to watch these days. 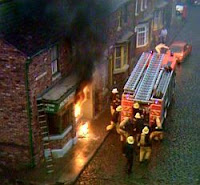 The big, sensational stories are good, they're well crafted and acted, even when you know or are pretty sure what's going to happen (people dying) but it's not the same as something coming as a surprise. I wonder if, when the Rovers burned in 1986, it was heralded in the press? If it was, it wouldn't have been like it is for this go-round, not all consuming sensationalism, but if it wasn't, can you imagine the shock? The shock of the Tram crash if you didn't know it was going to happen?

But it is what it is, and if we are going to keep watching, we just have to avoid as many spoilers as we can, if that's what we feel makes the show better, or just keep watching for the little gems. I'm a spoiler junkie and writing for the Coronation Street  blog makes spoilers unavoidable. I live in Canada, where, for many years, we were months behind the UK storyline and a lot of people here are more successful in avoiding spoilers because it isn't in the press very often aside from huge stories or a "memorable" death such as Jack, Vera or Betty's passings over the past few years.

I keep a sort of "sister" blog to the Coronation Street blog, the Bluenose Corrie Blog,  for the storylines as they happen in the Canadian timeline but I keep the blog spoiler free as much as possible. It's not always easy and when it came to the tram crash, I did break the rule but I didn't go into huge spoiler detail. It was just so difficult to avoid.

We in Canada are only 2 weeks behind the UK now so I doubt that I will post any spoilers on the Bluenose blog about the fire since there isn't long to wait. The fire will happen the week of March 18 and in Canada, we'll see the episodes from that week starting on Friday, March 30 and into the next week, I think.

I've been watching Corrie from Canada for over 25 years. When I started, we were 6 weeks behind. We fell behind further and further (I won't get into that!) but over the last year or so, we've caught up and it's great! Even though Corrie is one of the most popular tv shows in Canada, there are very few spoilers printed in the newspapers and none in the media magazines on the shelves which are mostly American though a couple of UK magazines are starting to appear including Inside Soap. Even with the American soaps, again, though spoilers are in fan magazines and on the internet, the media doesn't get all excited over soap storylines.

If there is a spoiler in a newspaper, it's never splashed on the front page. It's never on the news or entertainment shows, or very, very rarely. If Corrie is featured in a documentary or in an interview with a visiting star, they are usually careful to avoid spoilers mostly. Some of the fan events with the actors will probably witness some spoilers but even then, they are usually fairly minor in my experience. The actors, if warned, are pretty circumspect.

Canadian fans can always find spoilers on the internet if they want them but if you don't want to know the spoilers, here in Canada you can usually avoid them fairly successfully. You still need to warn your friends not to tell you, however!

If you read this blog or the Coronation Street one, you probably already do see spoilers and don't mind them. Do you mind very much the non-stop spoilers in the media? Is it a necessary evil? Would you enjoy the show more without them or do you just accept them and watch for how it's actually executed, written and acted once it's finally on screen? I do find that even though I know what's going to happen, watching how it happens and watching the actors and how it unfolds is still really enjoyable and still keeps me coming back for more.
Posted by Tvor at 08:23