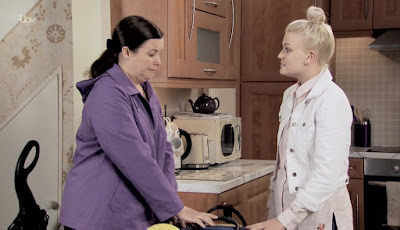 Bethany's storyline has been quite controversial. Some viewers think it's gone too far. Some hate that a corrupt policeman has been added for dramatic effect, saying that it could stop someone going for help in "real life". People know this is a fictional drama, and though these things happen in life, most of the police are not going to be corrupt. This kind of situation is nothing new. Pimps have been seducing vulnerable young women for centuries. Bethany might not have been forced to walk the streets for her clients but Nathan is pimping her out just the same. There have also always been corrupt police so why not introduce one to the storyline? Surely people watching have the sense to understand that it's still fiction they're watching on the screen.

Mind you, I should know better than to say that. I used to process the email that came in through the Corrie.net website. Flaming Nora can back me up here. There would occasionally be an email from someone that didn't seem to understand that what they were watching was acting. I remember when Alma died of cancer. There were a half dozen or more emails from people who really thought the actress was dying and how brave was it of her to portray Alma's death on screen. When the storyline aired in Canada some months later, in popped a few more similar emails. I guess there really are some people that get far too involved and confuse fantasy with reality. 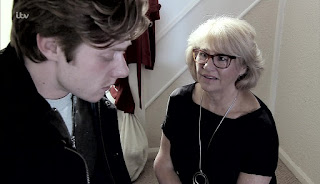 Would it really be possible for a mother to disappear without a trace for 7 years, leaving a 15 year old alone as Denise did with Daniel? The financial aspect alone would make it nearly impossible. She had a breakdown, allegedly, so how was she getting the money to put in the bank to pay the rent and bills? Yet apparently she did that. So why didn't Daniel trace her through the bank deposits? Why did not one neighbour or friend find it suspicious that she hadn't been seen for years? Why didn't Denise contact Ken and send Daniel to him if she wasn't going to be around? Daniel wasn't too keen on having his father in his life, as we saw during that last time Ken saw him but rather than leave your child alone, she had that option. Daniel could only lie and cover for her for so long before someone would start asking questions. We complain a bit but more or less accept the storyline as given because it's fiction.


I'm finding it a little difficult to accept that a man diagnosed with terminal cancer only bothered to try to find a guardian for his daughter almost before it was too late. He knew he didn't have much time left, he told that to Billy when he first appeared on the screen about a month ago. Surely if you have cancer, even if you don't know yet that it's terminal, you would scramble to get your house in order especially if you had the guardianship of a child to worry about, and especially knowing she'd either go into care or be given to your homophobic parents if you didn't make prior arrangements or at least write a will and express your wishes there. Social services might still get involved under those circumstances but surely they'd lean towards a big hearted gay vicar over a mean spirited homophobic grandmother.

I can't say yet if this story is going to interest me much but I will say this, if Billy and Todd do end up with Summer, they had better find somewhere to live. I'm pretty sure Eileen isn't going to go for having yet another mouth to feed. 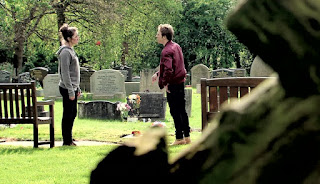 David finally found out Shona's connection to his late wife, the fact that her child is the one that killed Kylie. Naturally he went ballistic, particularly because he was finding that he was attracted to her and it was mutual. She went and ran off but I'm sure she'll be back and in the time honoured tradition of soaps, they'll eventually get together though it's going to be weird that Kylie's kids' step-mother is the mother of the man that killed their mother. My head hurts already! 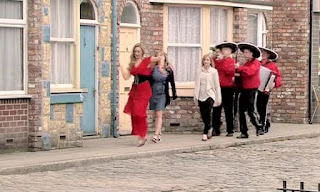 We all know that Eva's been in full on Bridezilla mode, trying to get Aidan to propose. She's been dropping hints like the flower girl drops rose petals up the church aisle. He's not picking them up. Deliberately. He likes having it both ways, a gorgeous blonde in his bed and another beauty on the side. He can continue to make promises to both of them and probably enjoys the danger zone. Eva took desperate measures and proposed to him in public so what could he do but say yes! Just to cement the deal, Eva is now pregnant though of course, she wouldn't have known that before the proposal I don't think. What I do think is that I wouldn't put it past her to have placed herself in that position of the possibility of getting pregnant because that would be her backup guarantee of a wedding.

Eva's always been full-on with relationships, pushing them into the next step before the fella was ready for it. I think that's why she kept getting engaged and then dumped. When we first met her, she was licking her wounds after a broken engagement and was there not something about when she was staying in France (when the actress was on maternity leave), that she wrote to Leanne that she met a guy and got engaged? When she returned, she was broken hearted again. Those relationships start up and zoom through to that huge commitment stage far too quickly and that's her fueling the zoom bit just like she's done with Aidan. First it was the push to get him to move in and recently it's been the proposal anticipation. But while she's told him about the baby, she's also going to be plotting his downfall while he continues to gleefully juggle both women, making empty promises to each.

We suspend disbelief in most cases when dramatic license is taken. There's no harm in that. Tv, movies, books, fiction. Sometimes the writers need to throw in a twist or two that might be a bit over the top.

What bothers me is the nit-picky stuff, or if a character is written to do something that we know they would never, ever do. (i.e. when it was discovered that Betty Williams pilfered all those bar glasses) We also stand up and holler if Corrie history is blatantly rewritten (Annie Walker couldn't leave the pub to Betty because the brewery owned it and did until Bet Lynch left and the Duckies bought it from Newton and Ridley.) Would one small neighbourhood have that many people that have had anywhere between 4 and 6 spouses? Would one small neighbourhood have a building bursting into flame every year or two? Sometimes, you just roll your eyes and get on with it.